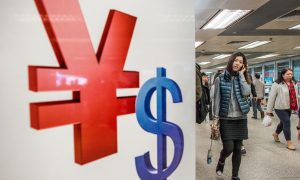 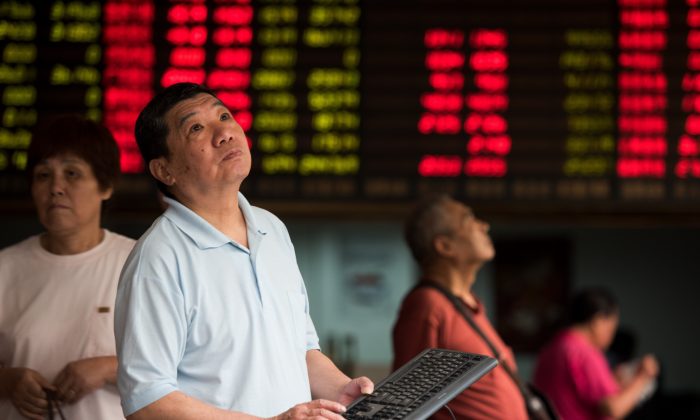 China’s stock market has been relatively quiet since the big crash in June and July. It seems that period of quiet has come to an abrupt end with the shares crashing 6.15 percent on Aug. 18.

One thing China always had going for itself was stability. Real estate bubble? No problem, the regime will stabilize it. Excess capacity and rampant deflation? No problem the regime can handle it.

Stock market? No problem the regime can prop it up.

Currency? Pegged to the dollar, nothing to worry about—at least not until Aug. 11.

The fact China has taken a step to liberalize its exchange rate has added huge uncertainty to every other asset class, which is one of the reasons stocks are selling off hard.

Of course, another reason is that in the case of the stock market, the regime actually cannot prop it up indefinitely, despite having spent $140 billion to support stocks since June, according to Goldman Sachs estimates.

Traders have come to rely on a government support fund to the tune of $310 billion. “At 2 p.m. it started to turn south again at a very fast rate,” Steve Wang, a research director at Reorient Group told the Wall Street Journal. “People questioned why the government hadn’t yet stepped in” at the usual hour.

At the beginning of August, Goldman analysts were still confident the regime could make up for retail investors selling, as Chinese mainland shares have lost up to $4 trillion worth of market capitalization during June and July this year, according to estimates by research firm Stratfor.

“We believe authorities including the People’s Bank of China are also likely to inject further liquidity if needed. This implies sufficient market-support funds to continue to provide a downside cushion to the equity market as the later stages of retail deleveraging unfold,” Goldman wrote in a note to clients.

However, the mismanagement of the stock market drop and its recent failure to support prices also casts doubt on the regime’s ability to manage the decline in its exchange rate—and vice versa.

Normally when a currency gets devalued by the central bank money printing, it actually helps push the stock market higher, at least in nominal terms. A good example would be the Fed’s QE program, which lifted the S&P 500 more than 200 percent from its crash lows of 2009.

An extreme example is the stock market of Venezuela, which is up 500 percent over the year. Its currency was officially devalued by 50 percent in one fell swoop in 2013 against the dollar. Unofficially, the devaluation was closer to 99 percent. The black market rate of the bolivar is 676 compared to the official rate of 6.30 to the dollar and 4.29 before the devaluation of 2013. So even if the stock market is up, with inflation running at 70 percent annually, gains are limited in real terms.

So what’s different in China? China did not devalue by printing more money. China already created trillions of yuan within its banking system after the financial crisis of 2008 and had previously enjoyed the dubious benefits of a real estate and stock market bubble. At the same time, a simultaneous devaluation of the yuan was prevented by the People’s Bank of China’s peg to the dollar.

On the one hand, the money created is debt owed by local governments and private corporations. On the other hand this money is credit owned by Chinese citizens and some foreign investors—and it wants out of the country. Minsheng Securities estimates $125 billion left the country in July and August alone. Some estimate the outflows could reach $800 billion to $1 trillion for 2015.

Since this money had already been created and citizens could not freely move it out of the country before, all the authorities had to do to weaken the yuan was to finally allow people to sell. That’s why the yuan and the stock market are going down at the same time.

Of course, many things can and will change in the foreseeable future, but if the recent run rate continues, even the $4.3 trillion stash of China’s foreign reserves might be gone in just a couple of years.

Why are Chinese and international investors suddenly so keen to move money out of the country? When people are selling a currency and exchanging it for another, they are not actually selling yuan notes and coins, they are selling the country’s assets. Chinese and international investors alike have been burned by malinvestment in real estate, excess production capacity, and equities.

The only thing they could bank on was that their yuan denominated investment would go up in foreign exchange terms thanks to the peg to the dollar. Not anymore.