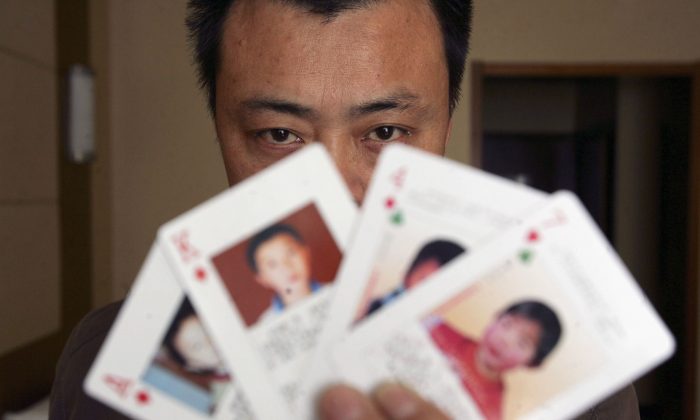 The "missing children playing cards" are displayed by Shen Hao, founder of the missing person wetsite XRQS.com, in Beijing, China, on March 31, 2007. The cards show photographs, informations of 27 missing children and Shen Hao plans to hand them out for free to the public security departments, civil affairs bureaus, and residents, in areas notorious for child trafficking. Shen, 38, a resident in Chuzhou of central China's Anhui Province, set up the wetsite in 2001 and later founded a network of volunteers dedicated to finding missing people. (China Photos/Getty Images)
HK Life

When a 7.8 magnitude earthquake struck Nepal in April 2015, it killed well over 8,000 people and turned much of the country into a disaster zone. 17 days later, as recovery operations were getting established, a 7.3 magnitude quake caused further destruction.

In the desolation, chaos, and widespread panic that followed a surge in child trafficking was almost inevitable, just as it was after the 2004 tsunami in southern Asia, the 2010 earthquake in Haiti, the 2011 drought in the Horn of Africa, the 2013 typhoon in the Philippines, and many other natural disasters besides.

So why do these disasters make children so vulnerable to trafficking—and what can be done about it?

UNICEF defines child trafficking as “the act of recruitment, transportation, transfer, harboring, or receipt of a child for the purpose of exploitation either within or outside a country.” The exploitation of trafficked children can take many forms, including forced prostitution, labor, marriage, militia service, and domestic servitude, but it nearly always means dirty and dangerous work for little or no pay. Sexual abuse and enforcement through threat and violence often feature, too. According to the U.N. Office on Drugs and Crime (UNODC), the most common form of human trafficking (79 percent) is the trafficking of women and girls for sexual exploitation.

It’s difficult to get accurate and current statistics on trafficking because generally only those survivors who are identified and rescued can be counted, and there is no single monitoring organization. In 2001, the International Labor Organization (ILO) estimated that worldwide there are some 2.5 million people who have been trafficked. The UNODC suggests that an average 20 percent of these are children, with a much higher fraction in many developing countries and regions.

In Nepal, as in other developing countries, birth registration is poorly enforced, making children difficult or impossible to track in any system. People living with poverty are especially vulnerable to the false promise of a better future, and in an economy that depends heavily on dividends from migrating workers, desperation can lead people to consider risky opportunities.

Families are often enticed by the offer of well-paid work for their child in another region or country. They may even be given an advance against the child’s anticipated earnings, and trafficked children hope to improve their lives and send money back to their families. But when they arrive at their destination, they find that the situation is very different.

In most poor societies, it’s the girls who are more readily taken out of school (or never sent in the first place). Parents may believe that education is wasted on a girl whose destiny is to marry and leave home. That leaves them open to persuasion that the opportunity to go away and gain “life experience” is in their daughter’s best interests. Girls—especially those with disabilities or from ethnic minorities or certain castes—are therefore particularly vulnerable to exploitation and abuse.

A 2001 estimate suggested that 12,000 girls are trafficked from Nepal to India annually for prostitution, a horror highlighted in the book and movie “Sold.” But this number took no account of any other trafficking from or within Nepal—current estimates put the annual total at around 20,000.

It’s easy to see how a natural disaster can amplify the conditions that enable and attract traffickers. The immediate disruption of state and civil society institutions, particularly schools, means the usual child protection systems aren’t in place. Regulatory mechanisms and border controls are also in chaos.

Under the cover of rescue efforts, traffickers (often women) can pose as religious leaders, relief workers, or representatives of government-accredited employment agencies promising jobs. Sometimes these tricks are mere opportunism, but sometimes they are the well-organized work of national and transnational criminal groups.

The people they exploit are extremely vulnerable. With family breadwinners killed or injured, land and livelihoods destroyed, and food and shelter hard to come by, people are more inclined than ever to take desperate actions.

Children separated from their families may be believed missing or dead. The assumption, genuine or otherwise, that a child is an orphan makes them especially vulnerable. Sadly, some families even send their children to orphanages because they can’t afford to care for them. These “orphans” may be trafficked directly or otherwise subjected to illegal adoption, sold to well-intentioned families from richer nations.

The following story from Nepal is typical and tells of seven children who have disappeared from a small village. Their parents believed they were sending them to a Buddhist monastery in India:

“We had to lie to police so that my son could leave the village with the Lamas,” said a parent of one of the children. “We are happy because the Lamas had promised to educate my son and send him home after three years.”

Since their departure shortly after the earthquakes, none of the children have been heard from and their location remains unknown.

Less than two months after the Nepal quakes, UNICEF reported that 245 children had been intercepted and saved from trafficking. That number has shocking implications for how many might not have been so lucky. Dr. Tshering Lama of ChildReach Nepal recently estimated that “hundreds if not thousands of children will have been trafficked as a direct result of conditions caused by the earthquakes.”

In the direct aftermath, UNICEF worked in collaboration with the Nepali government on a range of responsive and preventative measures, and with civil society and a number of national and international NGOs to prioritize getting children back into school as quickly as possible.

A fundamental strategy to prevent child trafficking in Nepal is to keep children in schools, protecting their right to education and a safe environment. Campaigns such as Taught Not Trafficked, working in partnership with survivors’ group Shakti Samuha, promote crucial awareness and have been providing education, shelter, legal aid, vocational training, and counseling before, during, and after the quakes.

But more than that, it’s essential that child trafficking everywhere is not treated as a symptom of natural disasters. It must be recognized as a scourge that requires coordinated international action, including advocacy and awareness integrated across all programs that work with vulnerable children and their families and communities. In this way, agencies will be prepared to respond quickly and effectively when—not if—the next disaster strikes.

Anna Childs is the academic director for international development at The Open University in the U.K. This article was originally published on The Conversation.