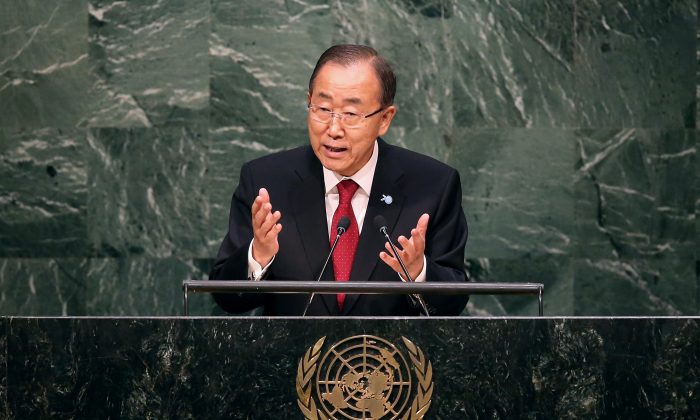 To many Americans, it feels as if the world is becoming a more violent place. Besieged nightly with video of conflicts across the Afghanistan, Nigeria, the Middle East, and Ukraine, it would be easy to draw that conclusion.

Surprisingly, perhaps, the opposite is true: fewer people die in wars than ever before.

The World Is Getting More Peaceful

The newly released “Positive Peace” report from the Institute for Economics and Peace, which measures and communicates the “economic value of peace,” for example, documents conflict in 162 countries covering 99 percent of the world’s population. It defines positive peace as “the presence of the attitudes, institutions, and structures that create and sustain peaceful societies. Well-developed positive peace represents ‘the capacity that a society has to meet the needs of citizens, reduce the number of grievances that arise, and resolve remaining disagreements without the use of violence.'”

Using a variety of measures, the report’s authors conclude that things have consistently improved in the last decade. This is especially true in what they term “the developing world.” In that time, 118 countries improved, only 44 got worse.

Of course, many of those 44 places have gravely worsened—like Syria.

The situation in Syria now is so fluid that it is hard to pin down precise figures. But the numbers are staggering.

The situation there now is so fluid that it is hard to pin down precise figures. But the numbers are staggering.

The United Nations Refugee Agency (UNHCR) said earlier this year that 12.2 million people there were in need of assistance, 7.6 million having fled from their homes but still in the country. This is what UNHCR calls internally displaced persons, or IDPs.

Almost another 4 million refugees were living in neighboring countries in the spring. The Russian intervention in Syria has only made things worse. And as a UNHCR report published last week made emphatically clear, things are about to get even graver, with winter approaching and the resources needed to clothe, feed, and heat these people stretched far beyond the U.N.’s capacity.

But what can the U.N. do about it? Do we expect too much of the U.N. when it comes to establishing peace?

Faced with the calamity in Syria, it is no wonder that even Ban Ki-moon, the demure and ever diplomatic secretary-general of the United Nations, reportedly berated government officials from the major powers at a recent meeting in New York.

Ban reputedly asked the five permanent members of the Security Council—Britain, China, France, Russia, and the United States—to stop vetoing proposals for the U.N. to act in crises areas like Syria, South Sudan, Ukraine, Yemen, and, yes, even the Israeli–Palestinian conflict. He pointedly requested that they allow investigations into mass atrocities to proceed in cases where war crimes might have been committed.

But in this reputed age of “naming and shaming,” where the wide publication of reproachable acts through social media is supposed to persuade the guilty parties to change their behavior, Ban’s call fell on deaf ears.

France and the U.K. have pledged not to veto such proposals. But the other three Security Council members refused to make such a promise.

Impediment No. 1 to UN Action: The Veto

Although under-resourced, U.N. agencies will certainly continue to provide humanitarian assistance in crisis areas like Syria. But there are two problems when it comes to discussing the prospect of independent investigations into atrocities or humanitarian interventions carried out by U.N. peacekeeping forces.

As Ban’s comments suggest, in part the problem is that one or more of the five permanent members of the Security Council have a vested interest in many of these crisis areas. It’s one that isn’t served by U.N. meddling.

The same is true of the Americans—either in Syria, where the United States reputedly has no boots on the ground, or in Afghanistan, where it is not supposed to be bombing hospitals.

Although they are not fighting on behalf of the government there, the Chinese have nixed investigations into atrocities in Sudan and, like Russia, in Syria.

The British and French, it should be noted, haven’t vetoed anything since 1989. But the obstinate refusal of the other three members to let even the worst cases move ahead with investigations has generated a backlash.

Other governments are now arguing for the U.N.’s institutional reform to get rid of the veto altogether.

Impediment No. 2 to UN Action: The ‘Safe Zone’

The second problem when it comes to discussions about actually committing forces to protect civilians concerns the creation of what are often called “safe zones.”

In part, the problem is that we have come to expect much more from the U.N. than we used to.

We have come to believe that the U.N. can establish the peace where the local inhabitants don’t want it, even if the U.N. Security Council gets its act together and approves that action be taken.

That’s because over the last four decades or so, the actual function of a U.N. peacekeeping force has changed dramatically.

Between 1948 and 1988, the U.N. carried out only 13 peacekeeping operations. Simply stated, these entailed lightly armed U.N. troops being stationed between local belligerents who had fought themselves to a standstill. The role of the U.N. troops was symbolic. They just created a thin blue line between adversaries. They didn’t fight.

In the four decades that have followed, there have been 58 more peacekeeping missions, with 16 currently in operation. That’s more than in the first four decades combined.

But it isn’t just the number of operations that has mushroomed. What is expected of them has also changed.

Dating from the 1990s, the U.N. mission evolved from peacekeeping to “peace enforcement.” Encouraged by the initial efforts of Secretary-General Boutros Boutros-Ghali, and then developed by Kofi Annan, the U.N.’s leadership increasingly saw the organization’s role as being to aggressively and proactively protect civilian populations from annihilation by genocidal governments, either domestic or foreign; not to wait to act in the aftermath of atrocities.

This initiative became known as the Responsibility to Protect doctrine, or R2P.

R2P has had a rocky road.

Many smaller countries were initially worried that an initiative meant to protect human rights in the most extreme of circumstances would be used to justify U.N. action being taken against them. In their view, the U.S. invasion of Iraq gave substance to that fear. They worried that a U.N. authorized army would become a tool to justify invasions around the world in the protection of human rights. It wouldn’t just act in cases of genocide.

A great deal of political wrangling ensued. Nonetheless, after a few setbacks, major southern regional powers like South Africa agreed to throw their political weight behind R2P and others got on board. The U.N.’s member states then reaffirmed their commitment to the principle of protecting civilian populations under threat of genocide at a 2005 World Summit: “Each individual state has the responsibility to protect its populations from genocide, war crimes, ethnic cleansing, and crimes against humanity.”

The most explicit use of R2P as a justification for humanitarian intervention to date was in Libya in 2011.

The subsequent chaotic fragmentation of the country has been a setback for advocates of R2P. It has allowed critics to once again question the role of the U.N.’s peacekeepers. Are they supposed to rubber-stamp an already existing stalemate like their early years? Or are they supposed to pursue a new war-fighting doctrine that they argue is, in effect, a form of imperialism led by the great powers?

The Current State of Play

The consequences of the Libyan invasion leave the U.N.’s leadership in a difficulty situation when it comes to supporting peacekeeping operations around the world.

It can try to use its forces to maintain a shaky peace in various places. It mostly does so now in Africa and the Middle East. It can even unseat a few weaker despots around the globe. But it lacks the resources to fight major wars or the leverage to negotiate diplomatic solutions.

We are still in an age when great powers can veto negotiated settlements, even if they can’t create them.

We haven’t reached a point where all five powers have an interest in establishing a durable peace. Until then, the best that Ban Ki-moon can do is to expose the truth about who is betraying the civilians caught in the crossfire across the Middle East and beyond.

Simon Reich is a professor in the division of global affairs and the department of political science at the Rutgers University Newark. This article was previously published on TheConversation.com