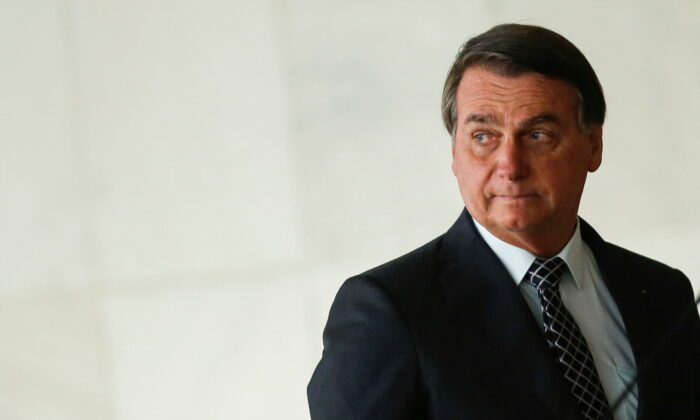 Brazil's President Jair Bolsonaro looks on before delivering a statement to the media with U.S. National Security Advisor Robert O'Brien (not pictured) at the Itamaraty Palace in Brasilia, Brazil, on Oct. 20, 2020. (Adriano Machado/Reuters)
Viewpoints

Why Brazilian President Jair Bolsonaro Deserves to Be Re-elected: Part 1

Jair Messias Bolsonaro is a retired military officer who has been the 38th President of Brazil since January 2019. When he was elected the nation’s president in November 2018, he singlehandedly brought an end to four decades of notoriously corrupt left-wing rule in the country.

Bolsonaro’s presidential campaign first gained traction when he promised to radically reduce crime in what used to be the world’s most homicidal countries. Bolsonaro himself was the victim of a brutal political crime while campaigning for the presidency, nearly fatally stabbed during a public rally in the city of Juiz de Fora near Rio de Janeiro.

The attacker was a left-wing extremist who was a member of the PSOL (Socialism and Liberty Party), a far-left party that split from former President Lula’s Workers’ Party. After spending a month in the hospital, Bolsonaro struggled to return to the campaign trail and needed multiple surgeries to prevent further injury.

While the end of the country’s military regime in the 1980s was hailed as the commencement of a new era of human rights, from 1985 (the first year of civilian government) to 2018, the number of Brazilians who became victims of murder grew by astounding 257 percent.

However, after Bolsonaro became the President of Brazil, the murder rate began to drop quite dramatically. In his first year of presidency, it dropped by a whopping 25 percent in the first two months of 2019, compared with the same period in 2018. Improvements were also found in indicators of numerous other types of crimes, with dramatic falls in cases of rape, vehicle theft, grievous bodily harm, and armed robberies.

These impressive figures presented a positive step forward for Bolsonaro, especially when he was facing criticisms over his response to the fires taking place throughout the Amazon Rainforest.

In August 2019, France’s President François Macron told lies about the Amazon rainforest burning on an unprecedented scale in Brazil. Everything Macron showed—from the photo shared on his Twitter account to the wild claim about these fires harming the whole of humanity—was patently false.

In reality, under Bolsonaro’s presidency, writes Sergio Moreira Lima, Brazil’s ambassador to Australia, deforestation of the Amazon has been reduced by 72 percent. In addition, about 9.4 million hectares of native forest are now entirely regenerated, and forests are planted on a further 2 million hectares.

As the Brazilian ambassador also points out, 60 percent of the nation’s landscape remains covered by native vegetation, and protected areas amount to more than 25 percent of the entire national territory—50 percent in the Amazon region alone. By comparison, only 30 percent of the Brazilian territory is dedicated to agriculture and ranching, while in some European countries, these figures are 65 percent.

Jair Bolsonaro entered politics in the 1990s as a former army captain with an undeniable conservative agenda. The mainstream media, both national and international, does not appreciate his conservative approach and often portrays him as a threat to democracy when such a threat actually comes from the left, including some members of the nation’s highest court.

On April 20, the Federal Supreme Court of Brazil arbitrarily decided by ten votes to one, to sentence Congressman Daniel Silveira to eight years and nine months in prison for “posting insults” against members of that court on social media.

Chief Justice Luiz Fux argued that Silveira’s comments constituted “criminal anarchy” against democratic institutions, while Justice Alexandre De Moraes, who acted as rapporteur in the case, downplayed the defence’s argument that the lawmaker’s remarks fell under the umbrella of “parliamentary immunity.”

“The constitution does not allow freedom of expression to be used as a shield for hate speech and attacks against institutions,” De Moraes said.

Of course, the trial and conviction of an elected politician were entirely political and it violates the important principle of parliamentary immunity. The conservative federal MP was then sentenced to prison in an initially closed regime for verbally offending the very judges, who also stripped him of his seat in Congress and barred him from running for any public office in the October elections.

Justices of this Court, who effectively acted in this case as investigators, judges, and executers in their own cause, also imposed a heavy fine of $41,600 on this elected legislator in addition to requesting the removal of his parliamentary status.

“Society is in legitimate shock at the conviction of a parliamentarian protected by the inviolability of opinion granted to him by the Constitution, who only made use of his freedom of expression,” President Bolsonaro said.

These “new powers” of the nation’s Supreme Court are entirely unconstitutional. In Brazil, there is an incredible politicisation of the courts by which individual judges effectively consider themselves to be above the law.

Brazilians tend to see these judicial rulings as usually uncertain and unjust. They believe that these unelected members of the judiciary have failed them, and they now support a democratically elected president who has demonstrated enough courage to use his constitutional prerogative to pardon that elected legislator. And the president did just that a day after the legislator was convicted for criticising those very judges who prosecuted and condemned him, thus violating the doctrine of separation of powers and the most elementary principles of due process.

Bolsonaro then posted on his Facebook an important message to explain that he was pardoning the elected legislator “in the name of freedom of expression, an essential pillar of our democratic society.”

According to the president,

“The granting of a pardon is a constitutional, discretionary, and exceptional presidential measure aimed at preserving the traditional mechanism of checks and balances based on the separation of powers. … As the President, I have been democratically entrusted by the Constitution with the task of seriously looking after the public interest. Our society is now in authentic commotion, in view of the condemnation of a parliamentarian who should be protected by the principle of parliamentary inviolability of opinion and who simply dared to exercise his freedom of expression.”

This bizarre episode helps put into a proper perspective the current political scenario in Brazil. At home and abroad, a deeply biased media keeps spreading false claims that Bolsonaro is a racist, misogynistic, homophobic, fascist, etc.

No, he is none of such things. He is a true patriot and a defender of the rule of law.