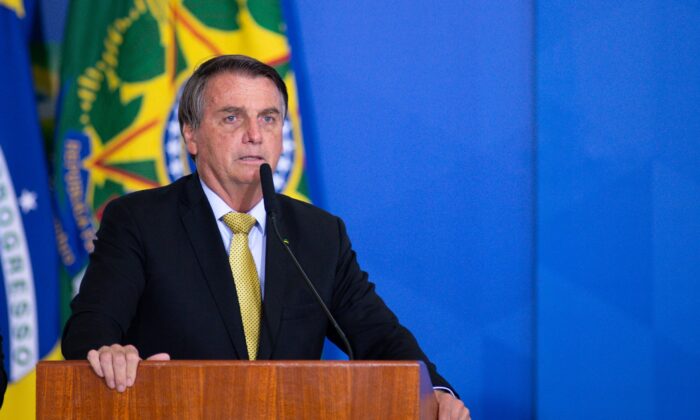 Why Brazilian President Jair Bolsonaro Deserves to Be Re-elected: Part 2

During the worst of the pandemic in Brazil, Jair Messias Bolsonaro, this brave political leader who has been the 38th President of Brazil since Jan. 1, 2019, fought really hard against far too many mayors and governors.

These politicians used their power to impose total bans on freedom of assembly and freedom of movement, which directly contravenes Article 5 of the Brazilian Constitution.

Bolsonaro has always been against these unconstitutional measures, and on April 17, he boldly announced that the federal government is now lifting all the “public health” measures that have been in place for more than two years, citing a drop in the number of deaths and infections.

The decision came after he requested his health minister a few weeks ago to decree an “end to the pandemic” and called for a return to “democratic normality.”

President Bolsonaro could have done far more to protect the people were it not for the Supreme Court’s controversial ruling to knock down any of his attempts to overturn local restrictions, ruling that governors and mayors are entirely free to determine their own COVID restrictions.

Based on such a controversial decision, the country’s governors and mayors have been primarily responsible to combat the pandemic.

Bolsonaro has repeatedly asked the Court to reverse its decision, and, in March last year, he accused some mayors and governors of “acting very much like dictators and starving Brazilians, by forcing them to stay at home.” He also argues that federal lawmakers should investigate these actions of governors and mayors to whom the federal government has provided funds.

The President has, from the very beginning of the pandemic, been pressuring these local oligarchs to moderate their actions to avoid an economic collapse and the gross violation of fundamental human rights.

“They are imposing a state of siege, which is unconstitutional. They cannot do this without the approval of Congress. They are humiliating the population while saying that they are saving lives. How can they be saving lives, they’re starving people,” Bolsonaro said.

Although these local oligarchs have strongly opposed the president’s approach, Bolsonaro says he will continue serving the nation with ‘‘faith in God’’ despite the efforts of some very powerful groups, including the media and the Supreme Court, to delegitimise him and ‘‘hinder governance.’’

In Brazil, former presidents, corrupt politicians, and an increasingly autocratic judiciary, as well as a notoriously biased media, have all lined up to fight against a democratically elected leader who opposes the international-socialist agenda promoted by the World Economic Forum and the Western global oligarchy.

Bolsonaro’s electoral motto, “Brazil Above Everything, God Above Everyone,” works as a combination of belief in God and full recognition of Brazil’s national sovereignty. He is an authentic conservative politician who openly opposes such things as sex education material promoting acceptance of gender fluidity in schools, abortion on demand, and drug-use decriminalisation.

“We are signing a commitment defending the family, defending the innocence of children in the schools, defending the freedom of religion, against abortion and the legalisation of drugs”, Bolsonaro said during his first presidential campaign in October 2018.

Bolsonaro is also a God-fearing man who is not ashamed to profess his faith in public. On April 4, he attended a special ceremony to celebrate the 100th anniversary of Rio de Janeiro’s iconic Christ the Redeemer statue. There he stated: “Brazil is a country where approximately 90 percent are Christian. This is a moment of happiness, peace, or reunion that demonstrates in practice that we are a government that helps, collaborates, and fears its God.”

A few days later, on “Good Friday” April 15th, Bolsonaro participated in the “Accelerate for Christ” (Acelera Para Cristo) motorcade, where he passed with millions of motorcyclists through the main roads of São Paulo State. Organisers of the motorcade described this massive rally as an event to honour “Christ the Lord” and announced it on social media as “The Apocalypse of Motor Bikes.”

And Bolsonaro also happens to be a leader of great courage and moral integrity. He has never been involved in a single act of corruption and his tough stance on it has earned him enormous popular support.

By contrast, the socialist-oligarchical forces that oppose him and his conservative government are led by Lula da Silva, the notorious former president who is once again a presidential candidate in the forthcoming federal elections.

Lula was forced in 2018 to transfer his candidacy to another radical leftist because of the statutory prohibition of convicted criminals from running political campaigns while still servicing their criminal sentences.

His notorious presidency was responsible for the biggest series of corruption scandals in the entire nation’s history. Every single sector of his notorious left-wing government was implicated in acts of bribery, fraud, vote-buying, theft of public funds, failure to report illicit campaign financing, and a host of other felonious behaviour, which were revealed almost on a daily basis by the Brazilian newspapers.

For the reasons I’ve discussed here and in Part one, one would expect that Brazilian citizens will be wise enough to re-elect Jair Messias Bolsonaro as their president in the upcoming federal elections in October this year.

I sincerely hope so.