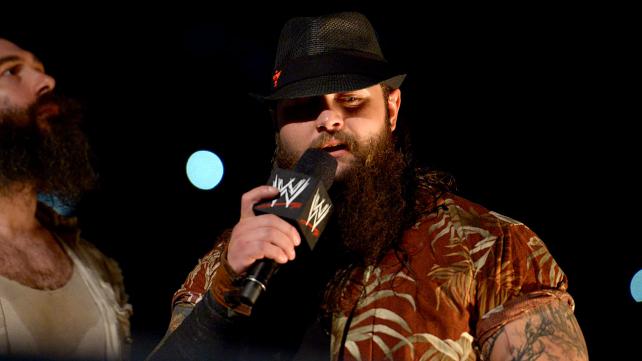 This week I was listening to WWE Hall of Famer Jim Ross’s podcast, (episode 12) the Ross Report on podcastone.com. Jim Ross during the podcast  mentioned something very interesting about Bray Wyatt. Ross mentioned that he did not know whether Bray Wyatt was a heel (bad guy) or baby face (good guy). With how Bray Wyatt’s character is being portrayed , and how the fans are reacting to him, maybe he should be neither.

If you saw Monday Night Raw live from London this past week, you saw one of the best crowd reactions to an entrance in a long time. When Bray Wyatt’s music hit, almost every person in the arena turned the lights to their phones on and clapped along with Wyatt’s music. What is interesting about that is, Bray Wyatt is supposed to be a heel.  Heels for the most part, are not supposed to be cheered, there supposed to be booed. Which leads to Jim Ross’s aforementioned question, is Bray Wyatt a heel or a baby face?

Probably the best thing for WWE to do creatively, is to leave fans not knowing what Wyatt is. John Cena a few weeks ago on WWE’s Main Event said that he would not try to stop people from following Wyatt. That statement perfectly describes Wyatt’s character; you’re either going to follow him or you’re not.

Bray Wyatt’s character is that of a cult leader, every week Wyatt goes out and preaches his message. Wyatt’s message is that he wants to change the world and build it in his image, the image of Wyatt. All of that would seem to be heel like behavior, but people seem to be connecting with Wyatt. With the fans embracing Wyatt does that mean he must be a baby face; maybe not, maybe Wyatt can be both, or maybe he can be an anti-hero?

Not labeling Bray Wyatt would be the best thing (in my opinion) not only for WWE, but Wyatt’s career. Bray Wyatt has the personality to pull off an anti-hero angle. Bray Wyatt has the ability to make half the crowd hate him and the other half love him. Now you could probably argue that Stone Cold and CM Punk are anti-hero’s, but no matter what either of those two did you cheered them. Bray Wyatt is the type of character that you’re either going to love or hate. Not putting a label on Wyatt could allow him to do some very exciting  things creatively that will excite fans and give them something to look forward to. The Bray Wyatt character has the potential to be a great character in the WWE, and if done right  the future.