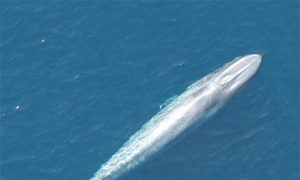 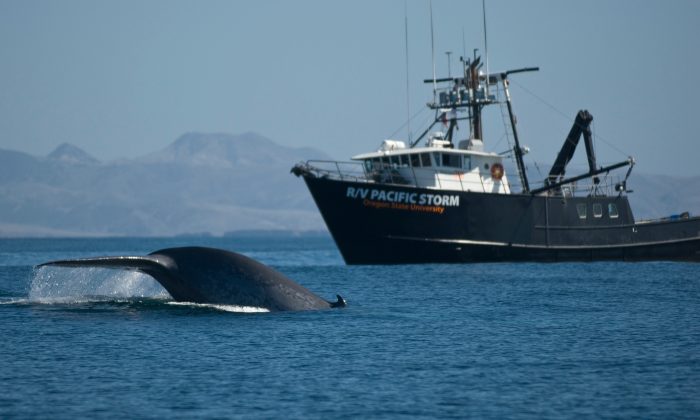 "It's not part of their evolutionary history to have cargo ships killing them, so they haven't developed behavioral responses to this threat," says Jeremy Goldbogen. (James Higgott/Flickr, CC BY-SA 2.0)
Environment

For millions of years, blue whales have cruised the world’s oceans with hardly a care, their sheer size making them largely free from predator attacks.

But being the largest animals in history comes with a downside: blue whales haven’t needed to learn any defensive maneuvers. This lack of an evasive response might be why they are particularly susceptible to deadly collisions with cargo ships.

“It’s not part of their evolutionary history to have cargo ships killing them, so they haven’t developed behavioral responses to this threat,” says Jeremy Goldbogen, assistant professor of biology at Stanford University’s Hopkins Marine Station, and the senior author on the study published in Endangered Species Research. “They simply have no compelling response to avoiding these dangerous ships.”

Collisions with ships are a major threat to whales and pose a significant threat to the recovery of some endangered populations. Efforts to reduce collisions have mostly involved placing speed limits on ships passing through busy whale habitats or rerouting shipping channels around these areas altogether.

However, a critical piece of information needed to make these decisions and evaluate their effectiveness is currently lacking: direct knowledge of how whales behave once they sense an oncoming ship.

To fill that gap, researchers headed to Long Beach, California, home of one of the busiest shipping ports in the world and also a hotspot for blue whales. Just a few miles offshore, the continental shelf drops off and there is a huge upwelling of nutrients that attract krill, a favorite food of blue whales.

Scientists used suction cups to adhere GPS and dive-logging units to blue whales, and then tracked their movements for 24-hour periods. The scientists then cross-referenced this data with boat traffic, including the tonnage and speeds of ships passing through the area.

In this first run of the experiment, the researchers observed 20 ship passages with nine individual whales, at distances ranging from 60 meters to more than 3 kilometers. In each of these instances, the whales exhibited behavior similar to the “startle response” that scientists observe during the tagging process, in which the whales essentially “play dead.”

“Blue whales have a subtle and not very convincing ability to get out of the way of oncoming ships,” says Goldbogen. “Instead of diving, where the animal kicks tail up and goes down vertically, they just sink horizontally. This results in a slow dive and leaves them susceptible to ship strikes.”

A whale must dive 30 meters below the surface to escape the suction created by a ship’s propeller. In the study, the whales sank at about a half a meter per second and showed no evidence for swimming laterally to avoid the ship. In most cases, this was barely fast enough to get out of the ship’s way. (View GPS datafrom a blue whale showing it narrowly missing a cargo ship.)

This is just the first step in figuring out the behavior of whales in the context of heavy shipping traffic, Goldbogen says. Researchers are already planning a second round of tests in which the GPS units will remain attached to the whales for several weeks, and will extend to species such as humpback whales.

With more data about both whale behavior and the frequency of near misses, researchers hope to be able to make a compelling recommendation to pleasure boaters and the shipping industry for how to minimize the risk of collisions.