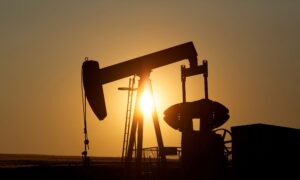 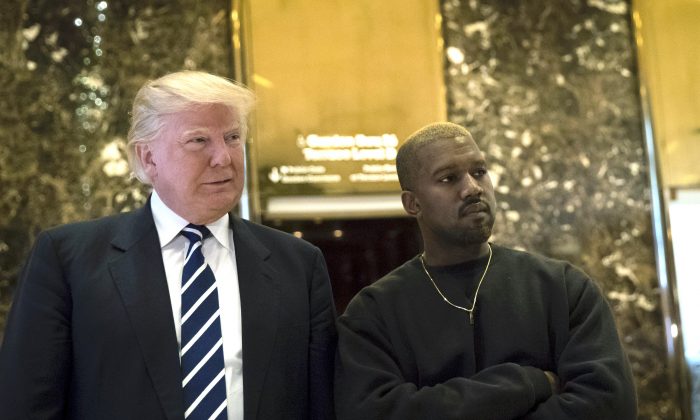 Then President-elect Donald Trump and Kanye West stand together in the lobby at Trump Tower in New York City on Dec.13, 2016. (Drew Angerer/Getty Images)
Politics

Why Blacks Are Leaving the Democratic Party

Rob Smith, a black, gay former Democrat, combat veteran, and author, was among those activists who chained himself to a White House fence to protest the “Don’t ask, don’t tell” policy of the U.S. military. He is also one of the strong black voices of what he calls the “’I Don’t Have to Be a Democrat Just Because I’m Black’ movement” that is embracing traditional values in the face of the radicalism of the Democrats.

“When you talk about black people right now as Democrats,” said Smith, “it is very obvious to me that the Democratic Party are completely selling out the African-American community to go all in on illegal immigration and an open-borders agenda. This is very obvious to anybody who is paying attention.

“They are kind of rejecting black America, like that’s over and now it’s all about, ‘OK, how can we go all in on illegal immigration? How can we make this the next reliable Democratic voting block for the next 30 to 40 years?’

“This is not about morality, and it’s not about anything else—it’s literally about a new voting block.”

The summer of 2018 has brought a wild and seemingly sudden rise of black influencers coming to prominence on social media by openly supporting President Donald Trump, breaking the decades-old stranglehold of the Democratic Party on black voters.

This political earthquake was a long time in the making and not at all a surprise for those who were paying attention—which seemingly did not include the Democratic Party’s strategists.

It appeared to shock the Party when rapper Kanye West voiced his support for Trump via a now iconic tweet stating that he loved “the way Candace Owens thinks.”

Owens, who is the director for urban engagement for the conservative youth organization Turning Point USA, had become a star on social media. She was also attacked for her conservative politics and support for Trump.

West defended her from what he called being “demonized.” He then wrote, “We have freedom of speech but not freedom of thought.”

These and other tweets that followed opened the floodgates, revealing the new political landscape taking shape in America.

In one message on April 25, West said: “You don’t have to agree with Trump, but the mob can’t make me not love him. We are both dragon energy. He is my brother. I love everyone. I don’t agree with everything anyone does. That’s what makes us individuals. And we have the right to independent thought.”

The last two lines of that culturally shattering tweet seem almost quietly unassailable. Yet they contain the Rubicon for the cultural “civil war” pivoting around a charged idea whose time has come: Black people are individuals, black people are not owned by the Democratic Party, and black liberation has transcended victim ideology to now land, with enormous irony, right behind a president who is relentlessly cast by the white, liberal mainstream media as a “racist.”

“I think there was a tripling in Trump’s approval rating when Kanye came out,” said Ali Alexander, a 32-year-old political consultant born to an African-American mother and Arab father. Alexander saw the makings of the movement back in 2012 and had been predicting this moment since 2009.

“So I knew that something bad was coming for the Democrats, and Kanye, I think, is the ball that’s bursting. It’s like, wait, when this economic pie is growing, are black people gonna have a piece of that? These demographics have been happening for decades.

“[West’s tweets are] a wonderful moment that causes blacks to question: “OK, so what does the welfare state do for me if I don’t plan to be on welfare?’ And I think that Kanye dived on a grenade for the rest of the black community, to have them start flirting with the idea of that.”

Wearing a “Make America Great Again” hat and wiping tears from his face, he said in a broken voice: “I was just sitting here watching President Trump … and he had this black lady come up and give a little speech about how her life has changed because of some of his accomplishments. And I’m just so proud. I’m just proud to be an American, you know.

“If you want to work, it’s jobs out here. And I’m just crying because … it’s just a good time to be alive. And to be able to witness what’s really going on. We got a chance. I’m just talking about from a black perspective. I just thank God for President Trump.

“Black people [are] working, you know what I’m saying? Jobs [are] coming back. Factories [are] opening up. He’s helping with the drug epidemic and all that. It’s just a beautiful time to be alive, y’all.”

Turn your attention to any square inch of the mass media landscape and Davis’s sentiment is anathema. There, on the networks, the comedy shows, the Hollywood award ceremonies, and even on the T-shirts of young white children, you see the words from actor Robert DeNiro’s shocking tantrum, “F*** Trump.”

Instead of hearing about working-class jobs, one hears that Trump is a new Hitler, a despot, a racist maniac who is hell-bent on destroying America and the world.

But since the sizzling center of the Trump-despising fire is the notion that he is a “racist,” why is it—as white liberal fear and loathing escalate unchecked—that more and more blacks seem to be coming around to Trump? How can this be squared?

“It has all been a lie,” said conservative black YouTuber “Uncle Hotep,” a father of two from Pennsylvania who works in IT. “It’s unfortunate because a lot of us believed it blindly.” He cites, as concrete proof that Trump has helped black people, the simple fact that each paycheck he gets is $100 higher than it was before the tax cut. “He’s put money in my pocket.”

“I voted for Barack Obama his second term,” he said. “The Democrats, in my honest opinion, based on my research, I believe the Democrats have historically hated black people. And I think they still hate black people today.”

French revolutionist Maximilien Robespierre was said to dread nothing more than the moment he would be laughed at, rather than feared. And this seems to be the moment that has afflicted the Democrats.

“Hotep” is an ancient Egyptian word that was used as a term of derision by the black left against black men who were refocusing on “conservative” or traditional values, like the sanctity of the family.

“Hotep Jesus” is a black conservative comedian, author, and Rastafarian. He is another YouTuber who became a sensation when he went into a Starbucks and demanded a free cup of coffee, as “reparations” for slavery, since he “heard y’all was racist.” The clip is deliriously American and very of the moment.

The take away: The derision on the left is not working anymore.

Sheila Lewis Ealey, an African-American mother of two from Texas, said: “Blacks coming out of slavery sided with the Republicans because those were the ones who fought for them. It was only because of the fact that we’ve got this revisionist history that you’ve got people who don’t know who they are and have formed an allegiance with the Democratic Party, because during the Kennedy administration, that was the party who really were forthright with the Civil Rights Act.

“When you look at blacks, they have been conservatives for a very long time. They are the group who really don’t believe in abortion. They follow the Bible to the letter, they are very rigid about the things that need to happen.

“But the Republican Party of the Reagan administration started dismantling black homes with the war on drugs—[that’s when] things shifted. And you’ve got 50 years of shifting, where you have blacks now who are starting to say, ‘Wait a minute, let me think about this for a minute.’

“Like my grandfather told me, I’d rather know who my enemy is, I’d rather he stand there and tell me that he doesn’t care for me, rather than the one who throws a brick and hides his hand.”

As African-American Cleveland Pastor Darrell Scott said in his 2016 Republican National Convention speech endorsing Trump: “The truth is, the Democratic Party has failed us. America is a melting pot. We’re a country of diversity. And we stand poised to make history by standing together as Americans.”

Owens recently told Fox, “I really do believe we are seeing the end of the Democratic Party as we know it.”

Correction: A previous version of this article misquoted Kanye West in an April 21 tweet. The original tweet was: “I love the way Candace Owens thinks.” The Epoch Times regrets the error.