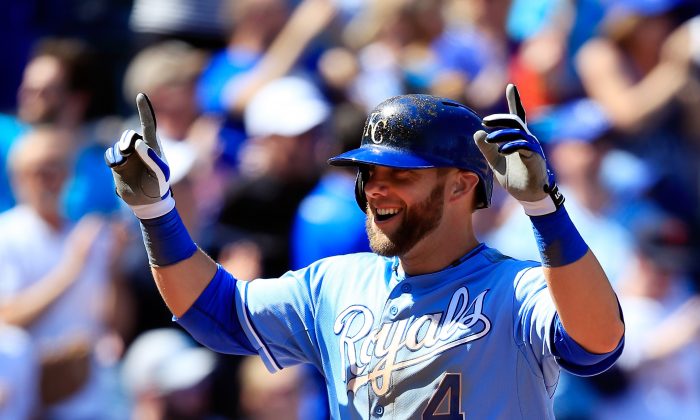 Four-time Gold Glove outfielder Alex Gordon is a free agent and it's no gimme that the Kansas City Royals will be able to re-sign him. (Jamie Squire/Getty Images)
Baseball

When the small-market Kansas City Royals beat the New York Mets in the World Series just a few weeks ago, it seemed to be the sign of the times in baseball—money (player payroll) is no longer an issue. Scouting and having a young core of good, inexpensive players is the way to go.

What’s forgotten is that eventually those players are eligible for bigger deals, and that’s what separates the small-market teams from the bigger ones in the non-parity world of professional baseball.

The Royals shelled out the 14th largest player payroll in the game this past season at upward of $125 million (according to Spotrac), while their big-market foes in the World Series ironically were actually a bit lower at $120 million.

But that $125 million price tag is only going to go up if they want to keep their young core together—especially if they’ve exhausted most of their minor-league prospects.

Look at Kansas City this offseason. The first of their core players—Alex Gordon—and Ben Zobrist, a very important complementary player, are currently free agents and the Royals are having to look under their couch cushions to scrape up enough money to just make each of them a competitive offer.

Whether they retain even one of them remains to be seen, and this is a struggle for them despite having no big contracts on the books. (FYI, their biggest deal ever was a 5-year, $55 million contract signed by Gil Meche and it has long since expired.)

Keep in mind, most of the rest of their core players (like Salvador Pérez, Eric Hosmer, Lorenzo Cain, Alcides Escobar, Yordano Ventura, Mike Moustakas, and Wade Davis) are either still in team-friendly contracts that take them through their arbitration years or they’re arbitration-eligible themselves.

Long story short, they’re struggling just to sign just one of their guys to a big contract while not being weighed down with any others.

What does that mean for their future?

It could be a very short window of opportunity.

The Royals have roughly two more season before they have to either decide to re-sign their own players, see if they can replenish through their minor-league system, or start over and rebuild again.

That’s when Hosmer and Moustakas, both represented by cutthroat agent Scott Boras, are likely headed to free agency in addition to Davis, Cain, and Escobar. Only Pérez and Ventura are signed beyond those years, and the Royals—thanks to a number of promotions and the trades for Zobrist and Johnny Cueto—don’t have the thriving minor-league system they had four years ago when it was the best in baseball.

This is where the big payroll comes in handy—it’s the difference between a quick three- or four-year window and a dynasty.

Look at the Yankees of 20 years ago. They had their core of star players in Derek Jeter, Mariano Rivera, Jorge Posada, Bernie Williams, and Andy Pettitte to go along with complementary pieces like Tino Martinez, Paul O’Neill, and David Cone.

They also had a huge payroll and were very smart about how they used it. (The exception was signing Jason Giambi and letting Martinez go following the 2001 season.)

The Yankees re-signed all their young stars to keep their winning core in tact, while adding other key pieces via free agency. The result was 17 playoff appearances, 14 division titles, 7 AL pennants, and 5 World Series titles in an 18-year span from 1995 to 2012.

That is a dynasty. And it doesn’t come cheaply.