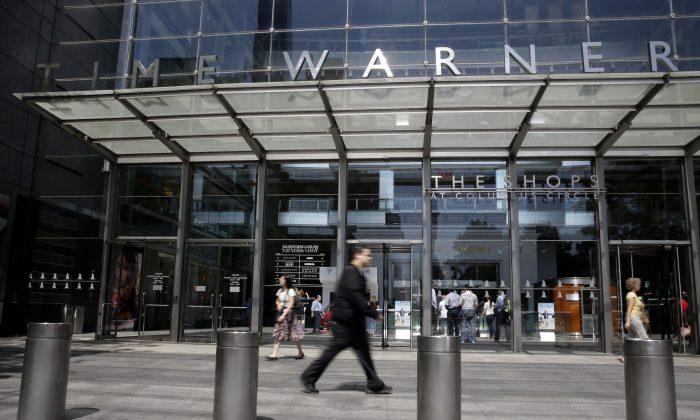 Pedestrians walk by an entrance to the Time Warner Center in New York on May 26, 2015. AT&T announced on Sept. 22 the acquisition of Time Warner for $85 billion in a stock-and-cash deal. (AP Photo/Mary Altaffer)
Business & Economy

AT&T Inc. announced on Oct. 22 the acquisition of Time Warner Inc. for $85 billion in a stock-and-cash deal, the largest merger of the year. Both companies believe the transaction will create financial and strategic benefits, but experts are debating whether the deal makes sense.

The merged company will be a competitive alternative to cable TV and other video providers. And customers will be able to access content on all of their devices.

“Premium content always wins. It has been true on the big screen [and] the TV screen, and now it’s proving true on the mobile screen. We’ll have the world’s best premium content, with the networks to deliver it to every screen,” said Randall Stephenson, AT&T chairman and CEO, in a press release.

The future of video is mobile and the future of mobile is video, according to the press release.

“At the heart of the deal is mobile video: The ability to combine AT&T’s mobile infrastructure, DirecTV’s video distribution, and Time Warner’s programming will be a disruptive one,” stated Macquarie Capital, in a research report.

In 2015, AT&T bought DirecTV, the second-largest pay TV provider in the United States, with 20 million subscribers. The merger enabled AT&T to provide a bundled product including TV, mobile, and high-speed internet. With the recent deal, AT&T will gain access to Time Warner’s TV and movie content, including its premium assets: HBO, CNN, and TNT.

AT&T’s subscriber and revenue growth have been sluggish due to market saturation and growing competition in its core mobile business. In purchasing Time Warner, AT&T is betting it will see good growth, good cash flow, and high margins, said Tim Nollen, a senior media analyst at Macquarie.

Owning content and getting better information on user habits will help AT&T create new revenue opportunities. The company will be able to offer more relevant and targeted ads to its customers, according to Nollen.

Analysts do not expect regulators to block the deal, as it is a vertical integration rather than a competitive horizontal integration (in which two competing companies in the same sector merge).

Some experts, however, are skeptical about the synergies of the deal and compare it with the AOL-Time Warner merger of 2000, considered the biggest merger failure in corporate history.

This time, it’s different: The new company will deliver what customers want, according to both companies’ executives.

“This says something about the state of the industry in the past two years … at least in Time Warner chairman and CEO Jeff Bewkes’ eyes, where the relative power of content has yielded to that of distribution, particularly online and mobile,” according to Macquarie.

However, the marriage of content and distribution does not create value, says Bharat Anand, a professor at Harvard Business School.

“The real battle [in consumer video] is not between content and distribution providers; it increasingly involves digital giants such as Facebook, Amazon, and Google,” he stated in a report in Harvard Business Review (HBR).

“Even if AT&T and Time Warner can better position themselves to win the battle against other content providers and distributors, they might lose the bigger war.”

Similar to Comcast’s purchase of NBC-Universal, the deal is expected to face regulatory scrutiny.

“Regulators would likely enforce arms-length transaction between the two companies and will not allow AT&T to get favorable terms on Time Warner content,” Nollen said.

According to Anand, since the content will not be exclusive to AT&T, the telecom giant could have simply done an agreement with Time Warner, the way Apple did with HBO.

“Do you need a huge merger deal to strike such arrangements?” he asks.