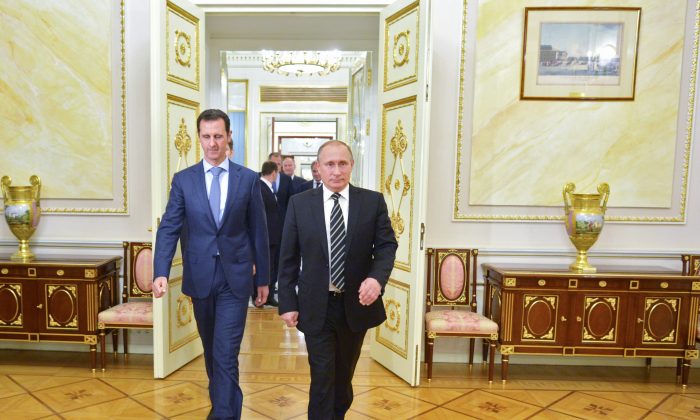 Russian President Vladimir Putin (R) and Syria President Bashar Assad arrive for their meeting in the Kremlin in Moscow, on Tuesday. (Alexei Druzhinin/RIA-Novosti via AP)
Europe

Assad apparently hadn’t left his home country since 2011 when civil war erupted across Syria, but that all changed when he showed up in Moscow, which according to the Kremlin and Syrian state media, was initiated at Putin’s request. The trip was only made known to the public Wednesday morning, just hours after the two met.

“Unfortunately, people from the former Soviet republics, at least 4,000 of them, are fighting against the Syrian army,” a serious-looking Putin said in a video of their discussion. He added, “They cannot return to Russia.”

The visit underscores Russia’s progressively visible role in the war.

The visit underscores Russia’s progressively visible role in the war. Moscow has been a crucial ally of Syria. It also shows Assad may have gained a boost to his confidence amid the Russian airstrikes, which have targeted mainly rebel factions and terrorist groups fighting against Assad.

“The Syrian people [have] been practically alone in putting up resistance and fighting these international terrorists for several years now, and has suffered great losses. Lately though, there have been some major positive results in this fight,” Putin told Assad, according to the transcript.

While the two met, Russian airstrikes continued “to bolster the Assad regime’s efforts to defeat the Syrian opposition,” reads a Wednesday report from the Institute for the Study of War, an organization that tracks the situation on the ground in Syria. Previously, the institute had said two weeks of airstrikes had little effect in aiding Syrian troops.

Russia, and before it the Soviet Union, has been a central ally of Syria. In the past four years, Moscow used its power of veto four times in the U.N. Security Council to block U.S.-led resolutions on Syria, while providing ample supplies of arms.

Some observers have said the main reason Assad has not traveled outside of Syria is that he might be overthrown if he were to leave. And since his first public appearance outside Syria was in Moscow, it suggests Russia is now the embattled leader’s most important ally. Iran is Syria’s other major ally, having sent troops to fight alongside the Syrian army.

Russia has stated its new military operations are against ISIS, but they’ve hit other groups, including the anti-U.S. terrorist group Jabhat al-Nusra, and the more moderate Free Syrian Army rebels, which gets arms from the United States and its allies. This week, it was reported that a top leader in the Free Syrian Army was killed by Russian bombers.

The Syrian Observatory for Human Rights on Wednesday said 370 people, one-third of them civilians, have been killed by Russian airstrikes.

The United States, which has been carrying out airstrikes against ISIS, previously said Russian intervention is a sign of weakness. However, Washington and Moscow signed a technical agreement on Tuesday to regulate drone and aircraft flights over Syria.

In his comments, Putin also appeared to reference a potential political settlement.

“On the question of a settlement in Syria, our position is that positive results in military operations will lay the base for then working out a long-term settlement based on a political process that involves all political forces, ethnic, and religious groups,” Putin told Assad. “Ultimately, it is the Syrian people alone who must have the deciding voice here.”