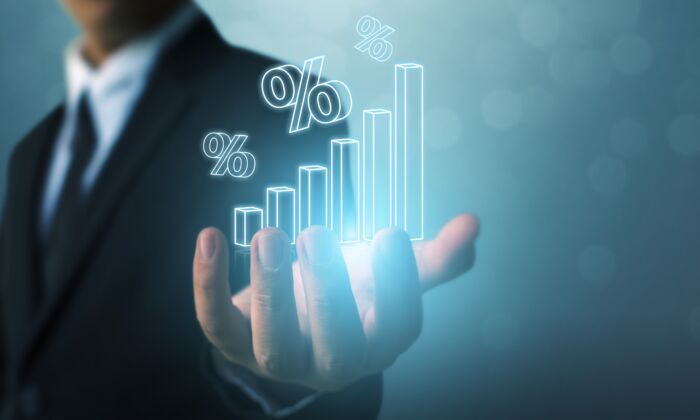 Why Artificially Low Rates Are Bad for You

The disastrous era of negative rates may be ending, but it isn’t over. Imposing negative nominal and real rates is a colossal error that has only encouraged excessive indebtedness and the zombification of the economy. However, nominal rates may be rising but real rates remain deeply negative. In other words, rates are still exceptionally low for the level of inflation we have.

Negative interest rates are the destruction of money, an economic aberration based on the idea that rates are too high and that’s why economic agents don’t invest or take the amount of credit that central planners desire.

The excuse for implementing negative rates is based on a fallacy: that central banks lower rates because markets demand it and policymakers only respond to that demand; they don’t impose it. If that were the case, why not let the rates fluctuate freely if the result is going to be the same? Because it’s a false premise.

Imposing artificially low rates is the ultimate form of interventionism. Depressing the price of risk is a subsidy to reckless behavior and excessive debt.

Why is it bad for everyone to keep negative rates?

The reader may think I’m crazy because hiking rates makes mortgages more expensive, and families suffer. However, you should also ask yourself why house prices rise to unaffordable levels. Because cheap borrowing drives higher indebtedness and makes asset prices significantly above affordability levels.

First, prudent saving and investment are penalized and excessive debt and risk-taking are promoted. Think for a moment about what kind of business it is that’s viable with negative rates but not with rates at 0.5 percent: a time bomb.

It’s no accident that zombie companies have soared in an environment of falling interest rates. A zombie company is one that can’t pay interest on debt with operating profits, has a negative return on assets, or a negative net investment. According to a study by the Bank for International Settlements, the percentage of zombie companies has risen to all-time highs in the period of low rates.

In the case of governments, negative rates have been a dangerous tool. They’ve made it comfortable to take on vast amounts of debt and make deficits skyrocket.

A policy designed as something exceptional and temporary was extended for more than a decade leaving a trail of inefficiency, malinvestment, and excess debt.

A policy designed to buy time and conduct structural reforms has become an excuse to avoid them, take on more debt, and increase imbalances.

But negative real and nominal rates disguise risk, giving a false sense of solvency and security that quickly dissipates with a slight change in the economic cycle. These extremely low rates generate greater problems as risk accumulates above what central banks and supervisors estimate, starting with governments themselves.

Negative rates have fuelled the public debt bubble that will end with higher taxes, higher inflation, lower growth, or all of them together.

Of course, the other effect of this economic aberration is high inflation—the tax on the poor. For years it has generated enormous inflation in assets, by encouraging risk-taking, from the real estate sector to the multiples of industrial assets or infrastructure. Borrowing was unusually cheap, and when credit soars, it flows towards high-risk assets and, of course, the creation of bubbles.

It’s surprising. The entire economic consensus recognizes that the rate cuts of the early 2000s led to the bubbles that cemented the excess of risk prior to the 2008 crisis. However, that same consensus applauds the madness of negative rates because there’s a perverse incentive in statism when the bubble is sovereign debt.

The European Central Bank has raised rates—to zero! The biggest increase in 22 years and the first time without negative rates for eight years. With inflation in the eurozone at 8.6 percent, it’s clearly an insufficient and timid rise.

Interest rates are the cost of risk, and with these rates the policy of central banks continues to penalize savings and prudent investment in real and nominal terms while risk-taking is encouraged.

It’s amazing to read that some think it’s imprudent to raise rates, to zero, with core inflation at levels not seen since 1992.

Will mortgages go up in Europe? Of course. But it seems incredible to me that the economic debate is on whether 40-year mortgage rates go up to 2 percent instead of why they were at 1.2 percent in the first place.

When you worry about the cost of a new mortgage going up, think that house prices have skyrocketed well above what we consider affordable precisely because of negative rates.

Hardly anyone buys something they can’t afford, taking debt if the interest rate reflects the genuine cost of risk.

Bubbles and credit excesses always occur after a planned incentive such as artificially lowering interest rates and injecting liquidity above the real demand for currency.

Of course, when bubbles burst, interventionists never blame the artificial lowering of interest rates or printing money—they blame “the market.”

Cheap money is expensive. The problem for the next few years isn’t going to be adapting to rates that will continue to be exceptionally low, but to realize the excess risk accumulated in the era of monetary insanity.

Those colleagues who recommend central banks to be “prudent” and not raise rates too quickly should have warned of the madness of lowering them at full speed until reaching negative levels.

If rates fluctuated freely, the creation of bubbles and excesses of debt would be almost impossible because the risk would be reflected in the cost of money.

The best way to prevent financial bubbles and crises isn’t to encourage excess risk and debt by artificially lowering rates.

Rates don’t have to be hiked or cut by a central planner. They need to float freely. Anything else creates more imbalances than the alleged benefits they promote.