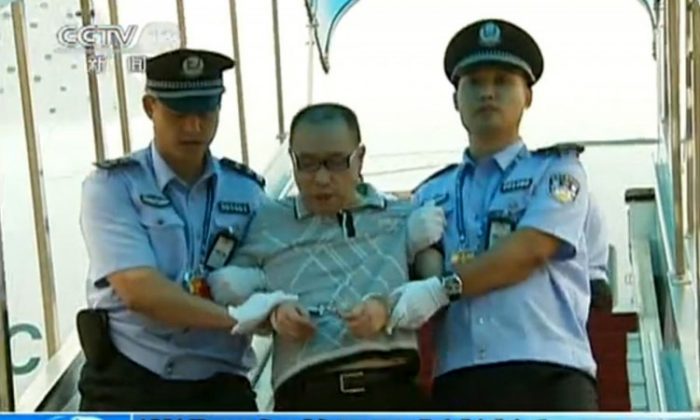 A screenshot taken on July 23, 2011 from China's Central Television shows fugitive Chinese businessman Lai Changxing escorted by police after he landed in Beijing aboard a civilian flight in the custody of Canadian police. (China’s Central Television/STR/AFP/Getty Images)
Chinese Regime

Beijing wants to see a controversial bill passed in the Hong Kong legislature that would allow the extradition of fugitives and criminal suspects to mainland China. The proposed bill has sparked mass protests in Hong Kong and widespread fear, given China’s record of unfair trials and persecution of rights and religious groups.

Hong Kong leaders who are believed to be under the control of Beijing have tried to defend the bill, saying it would bring fugitive criminals to justice and ensure the safety of the public. However, this argument must be considered bogus when remembering how the Chinese regime has dealt with its most high-profile extradition case in the past 20 years, that of former Chinese businessman and entrepreneur Lai Changxing.

Lai fled to Canada in 1999 when Chinese authorities started to investigate him for heading a multi-billion dollar smuggling ring, making him the most-wanted fugitive by the Chinese regime.

In 2011, after 12 years of diplomatic battle between China and Canada, Lai was extradited back to China on the condition that he would not be executed.

When Lai was investigated in 1999, only a few top Chinese officials had security clearance of the case and knew about the secret order to investigate Lai.

However, someone leaked the information to Lai, making it possible for him to escape while taking most of his loot out of the country with him. What’s more, twenty years later, the high-level Chinese leaker still remains a mystery.

In 1999, an official from China’s customs agency received a letter about Lai’s criminal activities, according to an August 2007 article by Phoenix, a Hong Kong-based pro-Beijing publication. Mou Xinsheng, who was the Director of China’s General Administration of Customs at the time, revealed that he received an anonymous letter in April 1999, which described in great detail the smuggling activities by Lai and his fellow accomplices in Xiamen, a coastal city in Fujian Province. The anonymous writer provided a long list of criminals and officials who were allegedly involved in the smuggling ring, including the then deputy minister of Public Security, a top official in China’s military, the then Commissioner of Xiamen’s Municipal Customs, and several top officials of the Xiamen Municipal Party Committee and the Municipal Government. The whistle blower also provided invoices as evidence.

As the smuggling case involved many high-ranking officials, Mou wrote a letter to Beijing’s top leadership, proposing that the Central Commission for Discipline should conduct an investigation. Luo Gan, the then secretary of the Central Political and Legal Affairs Committee, approved Mou’s petition. Luo wrote a remark on Mou’s letter, saying the investigation would require the cooperation between Customs and Public Security and be performed under the leadership of Central Commission for Discipline Inspection. Since the order was issued on April 20, 1999, the investigation team was named “420 Special Case Team.” Mou became one of the four team leaders.

However, according to Mou, six days before this secret order reached all the team leaders, Lai already knew about it. He immediately went to Beijing, bringing with him 30 million yuan (worth $3.75 million at the time), in an attempt to bribe the key investigators or an influential official who could intervene in the investigation.

Beijing Silent About the Leaker

Because the investigation order was a top classified document, only officials at the very top level of the Communist Party would have access to it. Then who leaked the information to Lai? It should be one of the simplest cases for investigators because only a few people could be suspects. In addition, the Canadian government handed Lai back to China on July 23, 2011. If the Chinese authorities were really serious about finding this key criminal who helped Lai escape, they could have easily identified him by interrogating Lai. However, eight years have passed since Lai was extradited to Beijing, and the investigation team in charge of Lai’s case has made no mention of the leak at all.

The leak has caused at least four grave consequences, according to the Phoenix article: First, Lai was able to destroy all evidence before the investigation was initiated; second, Lai quickly transferred most of the assets he had accumulated from smuggling–about 53 billion yuan ($6.6 billion) in value–through multiple channels; third, Lai and more than 70 of his smuggling accomplices escaped to other countries; and fourth, the extradition battle between China and Canada seriously affected the trade relationship between the two countries.

Wang Youqun, the aide to former Party internal disciplinary chief Wei Jianxing, told The Epoch Times that he wrote to former party leaders Jiang Zemin and Hu Jintao, as well as current leader Xi Jinping, during their respective tenures, calling for a thorough investigation to find this key criminal. Wang wrote in his letter that this person must have taken huge bribes from Lai, and as a top official who dared to commit such audacious outrages, he would pose a serious threat to national security if Chinese authorities failed to bring him to justice. However, no one ever replied to Wang’s letters.

The Hong Kong extradition bill should thus not be mistaken as a tool to ensure the rule of law, but as a tool to further the Communist Party officials’ political and personal interests.