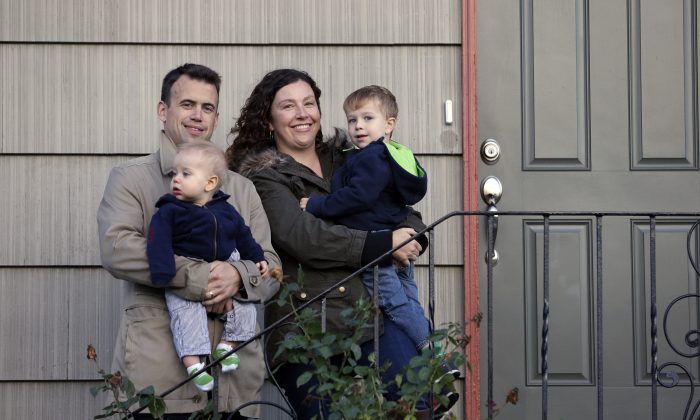 Jennifer Ewing, and her husband Florian Thiel hold their children Max (R), 3, and Felix, 8-months, as they pose for a photo on the steps of their new home in Seattles Ballard neighborhood, on Oct. 15, 2014. The couple recently closed on the three-bedroom house , which cost slightly less than $500,000. They moved to Seattle from New York, another city that matches the pattern of high-income jobs and even more expensive housing. (AP Photo/Elaine Thompson)
Home

Why Areas With Good Jobs Have Hard-to-Afford Homes

Around the country, areas with the strongest job markets increasingly have some of the costliest homes. And areas with the most affordable homes lack a solid base of middle class jobs that attract workers.

College graduates and younger families have been clustering in coastal cities such as New York, San Francisco and Seattle, where incomes are generally ample and solid middle-class jobs plentiful. Yet studies and government data show that homes in these areas have become prohibitively expensive â driven up in part by demand from the very residents who find homes there too costly.

The result is that the dream of home ownership for many is proving frustrating, being deferred or abandoned, even for people with comfortable incomes.

“This great mismatch is hurting middle class people who would like to be homeowners,” said Nela Richardson, chief economist at the real estate brokerage Redfin.

Roughly 40 percent of households in New York, San Francisco, Seattle, parts of Connecticut and Colorado, and Washington, D.C., earn more than $100,000 annually, compared with just 22 percent nationwide, according to the Census Bureau. But the share of their residents who ownhomes has been declining, one reason the national homeownership rate is 64.4 percent, the lowest since 1995.

“You need a job to even think about living arrangements,” said Stan Humphries, chief economist at the real estate marketplace Zillow.

This trend has likely helped hold back U.S. economic growth. Cities with the strongest job markets, such as New York and San Francisco, would grow even faster if more people could afford to live there, noted Jed Kolko, chief economist at the online real estate firm Trulia. The additional population would help spur further job growth, which, in turn, would strengthen the local economy and foster more of the middle-class jobs that the nation lacks.

Why Homes Cost so Much

Two factors are getting in the way.

Tighter credit has made it harder to buy a home in the costliest areas with a down payment of under 10 percent. Before the housing bust, people could buy a home with little or nothing down and pay an adjustable-rate mortgage that would limit their payments.

Those policies reached destructive excesses that ignited a housing collapse once people absorbed debts they couldn’t repay. Yet first-time buyers who have stable incomes are now struggling to afford homes without these options, noted Nela Richardson, chief economist at the real estate brokerage Redfin.

Richardson added that 3 percent down payments â a policy unveiled this week by mortgage giants Fannie Mae and Freddie Mac â are unlikely to have much effect in the costliest housing markets.

Second, construction is running well below its pace from a decade ago, and the many cranes tracing the skylines of San Francisco, New York and Washington are still too few. The government reports that builders are on pace to construct 1.02 million homes this year â about half the pace that prevailed in the early 1970s, when the oldest baby boomers were beginning careers.

Young adults continue to stream into many of the top job-generating areas despite the daunting housing costs. Nearly 52 percent of people who moved to the Bay Area over the past 12 months were millennials, according to Zillow. Similarly high percentages exist in New York City, Seattle, Denver and Washington. Many have been forced into rentals or are doubling up with roommates.

Nationally, home prices are generally three times the size of annual incomes. Yet that ratio ranges from 3.5-to-1 in Washington to 7.1-to-1 in San Francisco. The challenge of shifting from rentals to ownership has become more problematic, particularly as younger workers look to marry and raise children.

Trulia examined the share of homes affordable on a median income for millennial households. A $90,000 income for a typical young worker in San Francisco would be enough to buy only 28 percent of homes for sale. In Manhattan, only about 2 percent of available homes â likely a small studio with little room for a family â are affordable for that borough’s middle-class earners. Medianhomes in San Francisco and Manhattan cost close to $1 million.

Forty-eight percent of Washington, D.C.-area homes and 41 percent of Seattle-area homes were affordable for millennials. Prices inside these cities tend to average $400,000 to $500,000. But these projections assumed that buyers could make a sizable 20 percent down payment.

It’s still possible to buy a home with just 10 percent down, though not as often in wealthier pockets of the country. Even where lower down payments are available, they require higher monthly mortgage payments that can make homes even more expensive.

Affordable housing still exists, of course, in many areas. Millennials have the money to buy nearly 80 percent of homes available in Akron, Ohio, and Rochester, New York, according to Trulia. Several Texas cities, buoyed by the energy boom, offer both decent salaries and home ownership. But most affordable areas lack substantial job opportunities.

At the same time, government figures show that Fort Wayne has roughly the same number ofjobs now as before the recession began in 2007, meaning that bargain-priced homes haven’t fueled a surge of job-seekers.

In the hottest job markets, buyers typically brace for bidding wars and settle for less than they hoped.

When Jen Ewing left New York City two years ago, she figured housing would be reasonable in Seattle, where her husband had taken a job as a manager with Expedia.

“We thought we could get a beautiful four-bedroom house with a view,” said Ewing, 38. “Then we got here, and that wasn’t realistic at all.”

They found a cute house on a quiet street and offered 10 percent above the asking price, only to learn that theirs was the lowest of six bids. The home sold for $490,000, even though it needed about $50,000 in work to redo the roof and upgrade the electrical system.

For just under $500,000, they recently closed on a three-bedroom house a couple of blocks from a school for their two sons.

“There are some compromises we’re making, and we were willing to make them,” she said.

In Boulder, Colorado, which has drawn major employers and well-paying jobs over the past decade, real estate agent David Scott says there’s been a “strangulation” in the availability of houses under $800,000.

“It’s always hard for us to imagine that there will be enough money for people to earn to keep these prices sustainable,” he said.

Unaffordable cities could relieve the price pressures by building more homes. A greater supply would cause prices to fall. But there are restrictions on construction.

Some are geographic: Manhattan is a slender island. Seattle borders Puget Sound. Others are regulatory: Boulder adopted a slow-growth policy in the 1970s. San Francisco has refrained from building upward in ways that could block views of the bay.

“We have as little (home) inventory as I’ve seen in my lifetime â and I’m over 50,” McKenzie said.