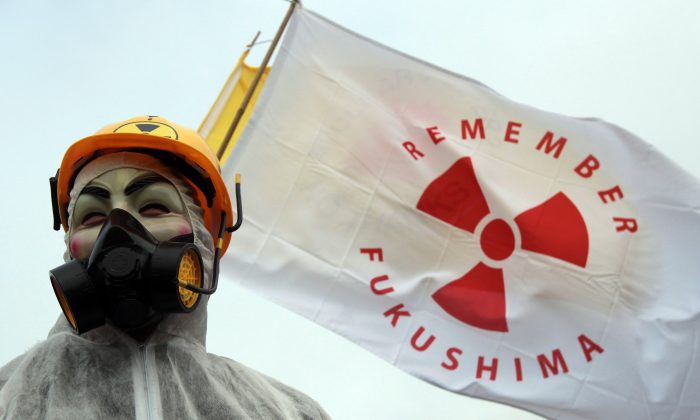 A masked protester stands in front of flags at the gates to the Hinkley Point nuclear power station to mark the first anniversary of the Fukushima disaster in Japan near Bridgewater, England on March 10, 2012. (Matt Cardy/Getty Images)
Viewpoints

Why Are We Afraid of Nuclear Energy?

I’m old enough to remember a time when using the term “nuclear energy” didn’t evoke the fear and terror it so commonly does today.

From the first announcement that scientists had unleashed the power of the atom through the 1960s, references to nuclear energy brought forth visions of a bright future, with cheap abundant power spreading prosperity around the world at unimaginable speed.

There was, of course, a dark side to the dream. If man could harness nuclear energy for the good of all mankind, he was also capable of unleashing the devastating power of the atom to level cities and murder tens—or hundreds—of millions. A grim part of the Cold War, assuming that one grew up in a NATO or Warsaw Pact nation, was living with the reality that one side or other might drop “the big one” at any moment and reset civilization back to the Stone Age megaton by megaton.

Like my contemporaries growing up in urban America in the 1960s, I knew where to go when the air raid sirens screamed for real. The neighborhood fallout shelter that I passed every day on my way to school was a stark reminder of the terror lurking just beyond the horizon of imagination. For me and my classmates, “ducking and covering” beneath one’s desk when the big one went off wasn’t the ludicrous exercise many in post-Cold War generations believe it was.

We knew that the biggest danger outside of the blast radius was fallout, and the biggest danger in fallout was alpha particles. The radiation from alpha particles is by far the most dangerous of the three types of radiation associated with radioactive decay (beta and gamma radiation being the others). But you don’t need lead walls to stop alpha particles. Relatively common materials, like the wood of a classroom desk, for example, could protect you. That was why “duck and cover” made sense. You wanted to get as much material, of virtually any sort, between you and the alpha particles in the cloud of fallout that followed a nuclear detonation.

I can’t refer to any formal studies or rely on any psychiatric education to say this, but I believe that the reasonable fear of nuclear annihilation that ate away at the American psyche throughout the Cold War slowly bled into unreasonable anxiety over nuclear power.

Fanciful scenarios, such as reactor cores melting through the Earth’s core (the “China Syndrome”) and containment vessels rupturing to spew massive amounts of radiation into the atmosphere were postulated and, all too often, taken seriously.

In good times, Americans have an almost pathological need to find something—anything—to worry about and, equally importantly, to adopt fixing it as a just cause. An increasing number of Americans (and like-minded people around the world) were consumed by the environmental movement, which fulfilled both needs. It gave us a problem to worry about: the health of the entire planet. And it gave us a noble crusade: saving the entire planet.

In this atmosphere, jumping the fence that separated the threat of nuclear war from the promise of nuclear energy didn’t take much effort.

Sober nuclear engineers and the professional overseers of the Atomic Energy Commission kept the doom-mongers in check for a time, but mistakes in the best-planned and -designed of human endeavors are inevitable.

In March of 1979, a combination of human and mechanical errors occurred at the Three Mile Island nuclear generating station near Harrisburg, Pennsylvania. These errors would eventually result in the release of a small amount of nuclear material into the environment near the plant. Despite the best efforts of nuclear-energy opponents to connect invisible dots, no link between any deaths or cancers in the surrounding area was ever demonstrated. The only victims of Three Mile Island were the bright future of nuclear energy in the United States and the millions of Americans whose lives would have been uplifted by it.

Three Mile Island established the playbook for the future, one written by nuclear energy opponents and largely parroted by a compliant media: 1) Any incident involving the physical integrity of a nuclear facility is a “disaster” by definition; 2)  the absence of injury or death as a result of the incident is of no consequence when declaring the incident a disaster; and 3) each disaster is further proof of why nuclear energy is always unsafe.

For a time, starting roughly around the turn of the century, it appeared that nuclear energy might make a comeback, despite the serious incident that occurred in Ukraine at the Chernobyl generating station in 1986. Then, on March 11, 2011, the magnitude 9.0 Tohoku earthquake sent a tsunami hurtling toward the Fukushima Daiichi nuclear station in Japan. Primary containment housing the uranium fuel rods in reactors 1 through 4 (5 and 6 were off-line at the time) wasn’t breached by the earthquake or by the 43-foot-tall tsunami that came crashing over the plant’s seawall. But, because emergency generators were poorly sited, emergency electric service was lost, causing cooling water pumps to shut down. This eventually led to pressure build-ups, (non-nuclear) explosions, and the release of radioactive material from Units 1, 2, and 3. Not good, but also not fatal to anyone.

Conventional wisdom declared that Fukushima was further proof, if any was needed, of how dangerous nuclear power plants are. But there was, and is, a minority view of Fukushima that I, and other scientists, share: A plant built in the 1970s survived the fourth-largest earthquake in recorded history and the subsequent wall of water with all primary containment vessels intact.

And then, when a design error led to releases, the magnitude of those releases wasn’t sufficient to cause any fatalities, even among plant workers. Viewed in that light, Fukushima should have been an affirmation of mankind’s ability to manage nuclear power safely, not an indictment of it.

Which brings us back to the present. There have been leaps and bounds in nuclear power technology over the decades. We can produce nuclear power as cheaply, reliably, and safely as we have at any time in history. Yes, there is the waste issue, but like nuclear power itself, that’s a matter of public perception, not public safety.

We live in an era when Georgetown, Texas, Mayor Dale Ross feels obligated to trade in common sense to fulfill a ridiculous promise to convert his town to 100 percent renewable energy, and when Rep. Alexandra Ocasio-Cortez (D-N.Y.) assures us that the world will actually end in 12 years. The root cause of these actions and thousands of others like them is the same: the supposed clear and imminent danger of climate change.

In that light, let me leave you with three pivotal questions: If you, like Ross and Ocasio-Cortez, sincerely believe that life on Earth is at stake, wouldn’t you seek out, identify, and implement available technologies that could reduce carbon emissions quickly and reliably, such as combined-cycle and nuclear power? Wouldn’t such an emergency morally obligate you to do so? Yet people such as Ross and Ocasio-Cortez never seem to talk about these kinds of practical, easy-to-implement solutions. What does that say about them?