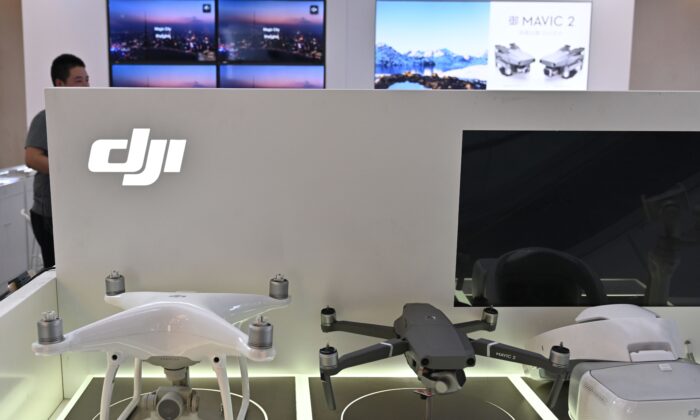 DJI drones are seen in a DJI store in Shanghai on May 22, 2019. (Hector Retamal/AFP via Getty Images)
Thinking About China

Why Are US Police Officers Using China’s Surveillance Tech?

The Biden administration imposed restrictions on a number of Chinese drone makers in December 2021. One of the companies targeted was DJI, the world’s leading drone manufacturer based in Shenzhen, China’s answer to Silicon Valley.

However, as the BBC noted at the time, banning Americans from buying and selling DJI shares was “largely symbolic.” As “DJI is not a publicly-traded company,” U.S.-based consumers “can continue to buy and use DJI drones.”

Just because you can still buy and use surveillance technology made in China doesn’t mean that you should. In fact, you really shouldn’t. But try telling that to the Chula Vista Police Department in San Diego.

As I write this piece, the Chula Vista Police Department (CVPD) is busy deploying surveillance drones manufactured by DJI. In July of last year, the Department of Defense (DOD) released a statement, warning that DJI’s drones “pose potential threats to national security.”

They most definitely do. As I have documented elsewhere, long before the Biden administration decided to take action, DJI has close links with the Chinese Communist Party (CCP), and there’s reason to believe that any data gathered in the United States is sent back to Beijing.

Now, before going any further, it’s important to state the following: this is not an attack on police officers. I am, in fact, a vocal supporter of what police officers stand for. This is a piece designed to reiterate the dangers posed by Chinese-made tech. If police officers insist on using drones, then why must the technology come from a company that has close ties to Beijing?

The mission of the CVPD’s unmanned aerial systems (UAS) program, we’re told, “is to provide airborne support to police operations in a safe, responsible, and transparent manner to preserve the peace, reduce response times, and increase the quality of life in Chula Vista.”

In August 2019, “through the tremendous generosity of the Chula Vista Police Foundation,” CVPD was given the funds to “purchase two new DJI Matrice 210 V2 Drones.” Then, the following year, “through a combination of a donation from the Chula Vista Police Foundation and the use of grant monies, CVPD purchased seven new DJI Matrice M-300 Drones.” As you read this, the M-300’s “are currently being deployed from all launch sites daily.”

This should worry all citizens in the San Diego area. As Albert Fox Cahn, executive director of the New York-based Surveillance Technology Oversight Project, told KPBS, “When a product is so bad for privacy that even the Pentagon is refusing to use it, I think that should be raising alarm bells.” Indeed.

More concerningly, as KPBS first reported, the city has signed a rather disturbing contract with Motorola Solutions, “a clearinghouse for data gathered by drones and other surveillance technologies.”

According to the contract, Motorola refuses to accept any liability for DJI’s “use of the data it collects through the drones.” What do you think happens to the data? Well, according to Zhang Fanxi, a spokesman for DJI, data is handed over to those in Beijing.

What kind of data is being collected by Motorola? According to KVPB, “social media feeds, information picked up by the agency’s automated license plate readers, known as ALPRs, and video captured by its drones sent out to 9-1-1 calls.”

The aforementioned Cahn, commenting on the contract, had this to say: “This is really just chilling and it feels like handing over Californians’ information wholesale to the surveillance vendors and a real dereliction of duty.”

Even more disturbingly, Chula Vista has given permission to Motorola Solutions “to sell the data” if it has been “anonymized.” It’s important to note that the idea of anonymous data is a lie. According to experts, it’s very easy to re-identify unnamed subjects.

This is simply unforgivable. Do you think the CCP would allow its police officers to use compromised tech from the United States? Of course not.

DJI is a dangerous company. Its products have no place in the United States. The Biden administration must impose stricter restrictions, because “symbolic” gestures are absolutely worthless.

John Mac Ghlionn
Follow
John Mac Ghlionn is a researcher and essayist. He covers psychology and social relations, and has a keen interest in social dysfunction and media manipulation. His work has been published by the New York Post, The Sydney Morning Herald, Newsweek, National Review, and The Spectator US, among others.