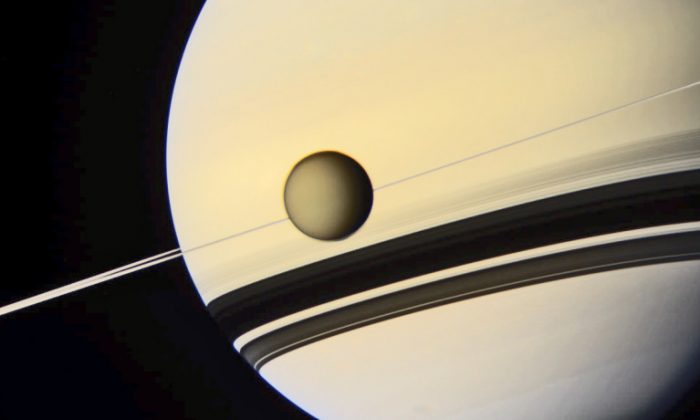 Like a tethered child, Titan accompanies Saturn in orbit. The ringed planet’s own 29.5-year orbit around the Sun is slightly eccentric, as summer in Titan’s southern hemisphere occurs when Saturn (and Titan) are closest to the Sun. This makes southern summer warmer and faster, when compared to northern ones. (NASA/JPL/SSI/color composite by Val Klavans)
Science

Why Are Titan’s ‘Plastic’ Dunes Going the Wrong Way?

The “wrong-way” dunes on Saturn’s largest moon, Titan, may be due to long timescale changes in their orbit around the Sun—similar to changes that caused ice ages on Earth.

Planetary scientists expected the dunes to respond to easterly winds. Instead, they observed via images from NASA’s Cassini mission to Saturn that the equatorial dunes appear to move in the “wrong” direction—from west to east.

“I studied whether changes in Titan’s climate—due to orbital variations over a 45,000-year timescale—could affect the orientations of the dunes at the equator,” says George McDonald, a senior physics major at Cornell University.

“The results suggest that they could. This could help to explain why the current dune orientations don’t seem to match what we’d expect, given the modern wind circulation found today.”

Long before McDonald studied the wrong-way dune images from Cassini, scientists Alex Hayes, assistant professor of astronomy and Ryan Ewing, assistant professor of earth science at Texas A&M University, collaborated and theorized that the dunes were shaped by winds that change because of orbital forcing. Ewing and Hayes mentored McDonald in his research. He presented his paper at the Lunar and Planetary Science Conference in Houston earlier this year.

For his research, McDonald analyzed Cassini radar images, which use microwaves instead of light. The radar imager pierces the murky moon’s atmosphere, unveiling its strikingly familiar geologic surface features.

Titan’s geologic features possess down-to-Earth familiarity. The moon’s thick atmosphere is in a perpetual state of organic smog, while wind and methane rain carve dunes, rivers, lakes, and seas into its cold surface. NASA scientists believe Titan can provide insight into the processes that drive Earth’s climate and surface.

Like a tethered child, Titan accompanies Saturn in orbit. The ringed planet’s own 29.5-year orbit around the Sun is slightly eccentric, as summer in Titan’s southern hemisphere occurs when Saturn (and Titan) are closest to the Sun. This makes southern summer warmer and faster, when compared to northern ones.

Like Earth, these orbital conditions change with time. Thirty-five thousand years ago, for example, Titan’s northern summers were hotter. These variations—called Croll-Milankovitch cycles on Earth—drive our ice ages.

For his paper, McDonald conducted an analysis using climate models from additional collaborators to examine dune orientation for the past 45,000 years. On Earth, giant dunes can takes thousands of years to reorient to changing wind conditions. The slow wind speeds on Titan suggest that timescales for its dunes are even longer.

“This has brought us to the point of believing that these long-term orbital changes could indeed be affecting the dunes,” he says.