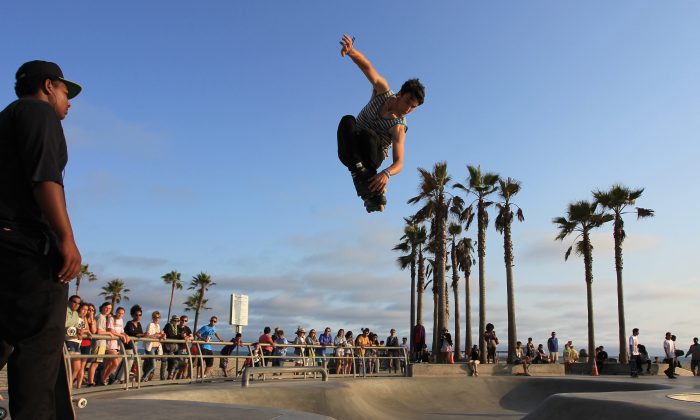 (David McNew/Getty Images)
Other US

Picture this: three skateboarders in national team tracksuits standing on the Olympic podium, medals around their necks, proudly singing the national anthem.

It is perhaps hard to imagine. But it may soon be a reality. The Japanese Olympic Committee recently announced five new sports for possible inclusion in the Tokyo 2020 Summer Olympics: baseball/softball, karate, skateboarding, sport climbing and surfing.

As recognised in the International Olympic Committee’s (IOC) 2020 agenda, a mounting issue for the contemporary Olympic Movement is how to remain relevant to younger generations. The average age of Olympic viewers is 55 years and ageing.

The IOC is seeking to address this problem with the inclusion of more youth-focused action sports. However, this process of inclusion is far from simple.

The Rise and Rise

“Action sports” refers to a wide range of mostly individualised activities such as surfing, skateboarding, snowboarding and BMX. Many of these activities gained popularity during the new leisure trends of the 1960s and 1970s.

Over the past five decades, action sports have experienced unprecedented growth in both participation and visibility. The incorporation of action sports into mega-events such as the X Games, video games and blockbuster movies has exposed these sports to the mainstream.

By 2003, five of the top ten most popular sports in the US were action sports.

The Struggles So Far

Over the past 20 years, the IOC has incorporated a range of youth-driven action sports into the Olympics. These include windsurfing in 1984, mountain biking in 1996, snowboarding in 1998 and BMX in 2000.

But the marriage between “alternative” action sports and the Olympics has not been straightforward. Reflecting on action sports’ counter-cultural heritage, many participants continue to view these activities as alternative lifestyles rather than as sports. They celebrate value systems that are often incompatible with the disciplinary, hierarchical, nationalistic Olympic regime.

In 2011, we illustrated some of the complex power struggles and cultural politics involved in attempts to modernise the Olympic Games. The incorporation of action sports and the resistance from many action sport participants themselves were among these struggles.

For example, the IOC’s decision to include snowboarding under the International Federation of Skiing rather than the International Snowboard Federation infuriated many snowboarders. It showed the IOC’s lack of understanding of snowboarding’s history and consideration of the athletes’ needs. Terje Haakonsen, the world’s best half-pipe rider at the time, boycotted the 1998 games as a result.

However, by the Vancouver games in 2010, snowboarding was among the most watched events. Snowboarders such as Shaun White were the games’ most-recognised and highest-paid athletes.

The Politics of Inclusion

The sporting cultures and industries of skateboarding, surfing and sport climbing are abuzz with news of their possible inclusion in the 2020 Olympics. Each sport has factions arguing for and against inclusion, and competing agendas are based on unique logistical and political issues. Surfing and skateboarding are revealing examples.

A fraction of surfers have been trying to get surfing into the Olympics for decades. International Surfing Association president Fernando Aguerre has been a key proponent in preparing the sport for Olympic inclusion. He was unsurprisingly thrilled by the announcement:

Surfing embodies a cool … lifestyle that would add a completely new element to the program, helping the Games reach new fans through live action and stunning broadcast opportunities.

Eleven-time world champion surfer Kelly Slater has also been working towards such a reality. Slater has collaborated with scientists to develop the technologies needed to host Olympic-level surf competitions in artificial surf pools.

But others are less excited. That Olympic surfing events will need to be hosted in surf pools rather than the – highly unpredictable – natural environment is a serious bone of contention.

Support was underwhelming for the inclusion of skateboarding, under cycling’s governance, in the London 2012 Olympics. Skateboarders around the world submitted an online petition to the IOC protesting the proposal.

But just three years later, attitudes seem to be shifting. Skateboarding legend and household name Tony Hawk is in full support of the proposal, highlighting the opportunities for both skaters and the games.

Much negotiation and many compromises will be needed on both sides. But with the IOC and skateboarding-related organisations both having much to gain, there appears to be a willingness to work together.

For many older surfers and skaters who fondly remember the counter-cultural histories of these activities, the corporatisation of their “lifestyles” as Olympics sports is the ultimate sign of their mainstreaming. In their words, surfing and skateboarding are “selling out”.

Some worry about overcrowding in the surf. Others struggle to see how an Olympic panel will adequately judge the creativity and self-expression of their activities.

But many younger participants have grown up in a commercialised era of the X Games. For them, the inclusion seems a logical and exciting progression.

For younger and older generations alike, self-governance is critical. If included in the Olympics, most surfers and skateboarders are adamant that such events must be managed by those who understand their unique cultural value systems.

Eyes on the Prize

Other than surf and skating industries, women are also likely to benefit if these sports are included in the Olympics. Female surfers and skateboarders continue to receive just a fraction of the media coverage, prize money and sponsorship deals available to their male peers.

The IOC will have to encourage the selected international surf and skate federations to work towards greater opportunities for girls and women – from grassroots to Olympic participation, and within the organisational structures themselves.

The inclusion of action sports in the Olympics also opens up exciting possibilities for countries that otherwise struggle for medals in more traditional sports. Whereas the global North usually dominates equestrian, rowing and yachting events, the skateboarding podium could easily feature athletes from Brazil, Mexico and China.

And the unpredictability of such events will surely make for entertaining – and perhaps more democratic – competitions.