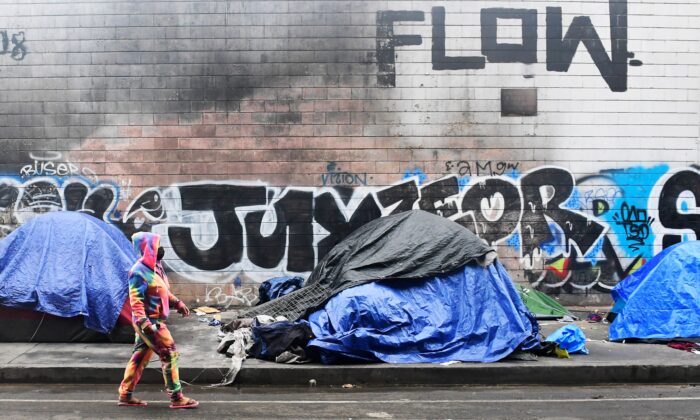 A woman walks past tents for the homeless lining a street in Los Angeles, Calif., on Feb. 1, 2021. (Frederic J. Brown/AFP via Getty Images)
Viewpoints

Why Are the ‘Liberal’ Rich Destroying America’s Greatest Cities?

Two powerful new articles—“The Fall of Los Angeles” by Joel Kotkin and “NYC’s Trinity School bares its unholy leftist hate” by Miranda Devine—illustrate in different ways what most of us have known for some time.

That people are moving out of them is hardly surprising. The real surprise may be that everybody hasn’t left. And I’m not just talking about the obvious—pervasive homelessness, garbage everywhere, the near-complete lack of public safety, and growing crime approaching dystopia.

I’m talking about something even more obvious and repellent—the rich, often mega-rich, “liberals” and “progressives” who run these cities don’t care if they’re run into the ground as long as they look good to themselves and their cronies and no one intrudes on or interrupts their lavish lifestyles.

Like an entire social class of modern Neros, they continue espousing the same policies while their two Romes burn. What’s wrong? Why do they never change? Is it just endless virtue signaling? Don’t you run out of that? How many Teslas can you buy?

Kotkin wrote of Los Angeles: “Worse still, conditions in LA today are bordering on the medieval. Anyone visiting some of the most famous districts of urban Los Angeles—notably downtown, Hollywood, and Venice Beach—sees clear signs of destitution, including sprawling homeless encampments, vast numbers of people living in vehicles and rampant crime. Last year, a UN official compared conditions on LA’s Skid Row, a poor downtown [neighborhood], to those of Syrian refugee camps. Smash-and-grab thefts at local 7-Elevens and the persistent theft of goods from railyards suggest this is a city that has lost control to the modern version of lawless highwaymen.”

Devine wrote of something more specific but frighteningly indicative of an accepted mindset in her city’s high-minded “liberal” society: its horrifying bigotry toward conservative “white boys,” actually wishing they would all be killed. This desire was expressed by one of the teachers at a fancy $61,000 per annum New York private school. Devine highlighted the school’s reluctance to own up to the evil inherent in that view, preferring to blame the messenger (Project Veritas).

She goes to the heart of the peril from this kind of talk:

“They should remember the prophetic words of German pastor Martin Niemoller, an opponent of Adolf Hitler who survived the Dachau concentration camp:

“‘Then they came for me. And there was no one left to speak out for me.’”

Does this small private school situation justify Devine’s rhetoric? The answer is yes, because the state of our culture resembles nothing more than Germany’s Weimar Republic. Los Angeles and New York being in drastic decline is a clear indication of that.

But back to my original question of why the “liberal” rich stand by and let this happen, weirdly, in some senses, encouraging it while living as most of them do in some kind of cordon sanitaire, with the most wealthy having their own security to protect them.

Why, for example, do large portions of L.A.’s mostly affluent homosexual community so adamantly back Karen Bass for mayor in the current race when Bass was, until very recently when the optics started to look terrible, a well-known cheerleader for Fidel Castro? Don’t they know Castro built concentration camps for gays? Is this a cognitive disorder? Virtue-signaling gone berserk? Hypocrisy gone berserk?

And it’s not just the gay community. It’s all of largely white West Los Angeles lined up behind a woman with a solidly pro-totalitarian background. (The other day, she reported that she was robbed of two guns—and nothing else—in her house, although she votes against gun rights every time. Go figure.)

No, there’s something more going on here than mere virtue-signaling (although there’s plenty of that). That’s a symptom of a deeper disease.

A few years back (2016), I published the book “I Know Best: How Moral Narcissism Is Destroying Our Republic, If It Hasn’t Already.” In it, I posited that there’s a kind of mental illness in our culture—a moral narcissism—leading people to separate what they say they want from the actual results ensuing from what they say. The latter is of little importance and to be disregarded, as long as you say the approved thing initially.

While I’m proud of the book, I underestimated what I wrote then. Moral narcissism is now a full-blown disease in the United States and throughout the world that’s more dangerous and harder to cure than COVID-19. It’s both a mental and spiritual illness. And it’s highly communicable, being taught as “knowledge” or “wisdom” in virtually all our schools.

Many things have contributed to the increased prevalence of this disease, including conformity, fear, and greed.

We live in a world of people who proclaim themselves to be good while doing bad, inadvertently or not. The extreme version of this is people like Fidel Castro, but the local versions may ultimately be more insidious because they’re less obviously recognized—until we see our greatest cities in this extraordinary state of decline.

And if you’re not living in one of those cities, don’t be smug. This decline, like moral narcissism, is communicable. It already has been—all over the place.