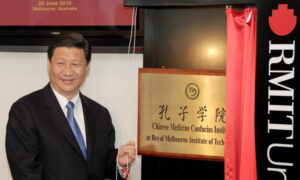 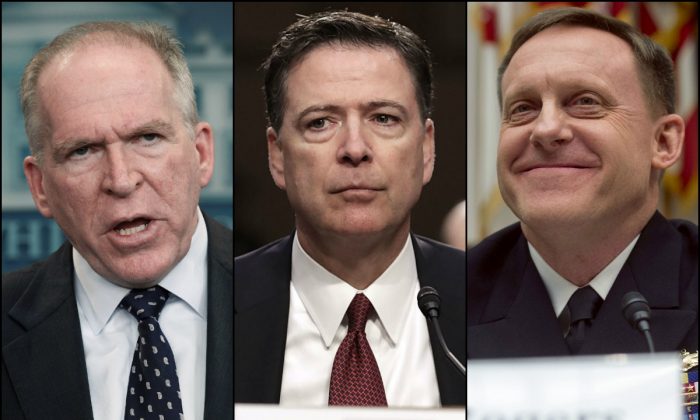 Why Are Brennan, Comey, and Rogers Transcripts Being Withheld?

Is the inspector general's ongoing FISA investigation a factor in withholding testimonies of top Obama officials?

The House Intelligence Committee voted Sept. 28 to release a number of transcripts taken from interviews during its investigation of 2016 election interference by Russia. The move by the committee was previously disclosed in a Sept. 16 interview by committee Chairman Devin Nunes (R-Calif.) on the Fox Business show, “Sunday Morning Futures with Maria Bartiromo.”

A significant number of man-hours and effort went into the preparation of the committee’s report—including the review of 7,292 pages of testimony.

As part of the investigation, the House committee noted that it interviewed 73 individuals, resulting in 55 transcribed interviews. The report also indicated that seven witnesses had invoked their Fifth Amendment protections against self-incrimination.

At this point, no firm date has been set for a release of the transcripts, although the wait isn’t expected to be lengthy. Transcripts approved for release will now go to Dan Coats at the Office of the Director of National Intelligence for a declassification review.

The full list of interviews to be released, accompanied by the actual date of the interview, can be found here. The first interviews took place in June 2017. Interestingly, the first person to be interviewed was newly installed Director of National Intelligence Coats on June 22, 2017. It’s likely Coats was interviewed first as a matter of housekeeping. Coats would work closely with Adm. Mike Rogers at the National Security Agency until Rogers retired in May. The second person to be interviewed was then-President Barack Obama’s deputy assistant secretary of defense, Evelyn Farkas, on June 26, 2017. There may be a very good reason for this.

On March 2, 2017, Farkas went on MSNBC. During the interview, Farkas detailed how the Obama administration gathered and disseminated intelligence on the Trump team:

“I was urging my former colleagues and, frankly speaking, the people on the Hill … ‘Get as much information as you can. Get as much intelligence as you can before President Obama leaves the administration. …

“The Trump folks, if they found out how we knew what we knew about the Trump staff’s dealing with Russians, that they would try to compromise those sources and methods, meaning we would no longer have access to that intelligence. … That’s why you have the leaking.”

Note that Farkas said “how we knew” not “what we knew.” A crucial distinction.

Hillary Clinton’s campaign manager, John Podesta, was interviewed the following day, on June 27, 2017. He would be interviewed a second time on Dec. 4, 2017.

There are two elements that make this interview list notable. The first is the inclusion of interviews from those higher up the political echelon—such as Clapper, Rice, Yates, and Lynch.

The second element of interest is the names missing due to internal decisions to withhold their transcripts. Two of the withheld transcripts relate to two congresspeople: Rep. Dana Rohrabacher (R-Calif.) and Rep. Debbie Wasserman Schultz (D-Fla.).

Rep. Mike Conaway (R-Texas) said these interviews were being withheld “as a ‘professional courtesy’ extended to members of Congress who participated in the interviews with the understanding they would be confidential.” Both Wasserman Schultz and Rohrabacher have provided indications they may agree to the release of their transcripts.

The remaining transcripts being withheld are those from closed hearings with former CIA Director John Brennan, former FBI Director James Comey, and former NSA Director Mike Rogers. The final withheld transcript relates to the committee’s approval of their final report.

Another interesting item of note is that neither special counsel Robert Mueller nor any members of his team have seen or reviewed any of the interviews. Conaway noted: “He’ll ask for it if he wants to. He’s a big boy.”

Important to note in this process is the fact that DNI Coats had yet to review any of the transcripts for declassification prior to the decision to withhold transcripts for Comey, Brennan, and Rogers.

The transcripts of Comey, Brennan, and Rogers, originating from closed hearings, may inherently contain some classified information. But the decision to withhold didn’t pertain to any decision from Coats regarding declassification issues.

Reasons other than issues of declassification may exist for the withholding of those three rather significant transcripts. One possible explanation might reside with the ongoing investigations by DOJ Inspector General Michael Horowitz and U.S. attorney John Huber—who was tasked by Sessions to investigate potential abuse of power by the FBI and DOJ.

Brennan and Comey were both central figures in the surveillance of the Trump campaign, including the FISA warrant on Carter Page and the ongoing promotion of the Russia-Trump collusion narrative. Brennan, who, in an August interview with MSNBC’s Rachel Maddow, appeared to admit to reverse surveillance targeting, played a key role in instigating the FBI’s counterintelligence investigation. Brennan also appeared to be coordinating his efforts with UK Intelligence on a less-than-official basis, including a meeting with then-head of Britain’s GCHQ, Robert Hannigan, in the summer of 2016.

Despite the lack of any official intelligence, Brennan specifically stated in a May 23, 2017, congressional testimony that intelligence he had in his possession “served as the basis for the FBI investigation.”

He continued: “It was well beyond my mandate as director of CIA to follow on any of those leads that involved U.S. persons. But I made sure that anything that was involving U.S. persons, including anything involving the individuals involved in the Trump campaign, was shared with the bureau.”

Brennan’s role in events preceding the 2016 presidential election is deserving of further investigation.

The inclusion of Rogers makes matters even more intriguing. Rogers, while director of the NSA, was personally responsible for uncovering an unprecedented level of FISA abuse that would be later documented in a 99-page April 26, 2017, unsealed FISA court ruling.

“I wouldn’t call it a discrepancy. I’d call it an honest difference of opinion between three different organizations and in the end, I made that call. … It didn’t have the same level of sourcing and the same level of multiple sources.”

Somewhat surprising is the pending release of Andrew McCabe’s interview transcript given the withholding of Brennan’s and Comey’s. The discrepancy may be related to the fact that information on McCabe has already been made public through the inspector general’s report on McCabe—”A Report of Investigation of Certain Allegations Relating to Former Deputy FBI Director Andrew McCabe.”

Huber has been publicly quiet since his appointment by Sessions. People easily forget that Huber and his hand-picked team of prosecutors have been in place since at least November 2017, working with IG Horowitz.

As Sessions noted, the IG “has almost 500 employees, most of which are lawyers and prosecutors—and they are looking at the FISA process.”

Inspectors general have no prosecutorial power. But they can refer people for prosecution. Which is precisely why Huber and his team are in place.