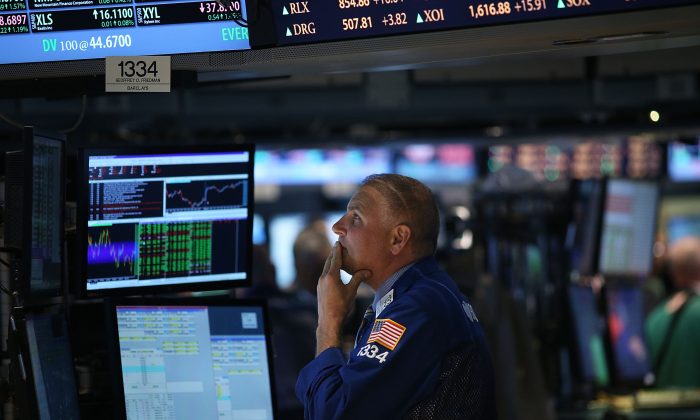 Traders work on the floor of the New York Stock Exchange on May 21, 2014 in New York City. (Spencer Platt/Getty Images)
News

Why Are Stocks Still Going Up?

It was Wall Street legend Gerald Loeb who first said, “Just when you find the key to the market, they change the locks.” In 2014, the lock has been changed again and contrary to conventional investment wisdom, stocks are still going up.

The market is expensive, growth is low, speculation rampant, the Fed is tapering, seasonality is rolling over (“sell in May …”) and still stocks are at a record. Why?

It turns out many companies found a generous sponsor who steadily accumulates their stock at any price and has deep pockets: Themselves.

According to research firm Capital IQ, S&P 500 companies bought back their own stock to a tune of $160 billion in Q1 alone. And while buybacks are nothing new and have been with this market for a while, the scale is unprecedented. At this rate, 2014 will easily surpass the $560 billion spent in 2007, the last cyclical bull-market top.

Mainstream analysis also doesn’t consider buybacks to be the driving force of the market, but the $53 billion spent per month in the first quarter is more than the Fed is spending on its quantitative easing (QE), margin speculators are borrowing to buy stocks, and retail investors are putting into the market.

In general, it is good for companies to return cash to shareholders in the form of dividends and buybacks. Similar to everything else though, once this reaches an extreme, several problems pop up.

If most cash is returned to shareholders, it means there isn’t a more productive use for that capital. Normally companies would use internally generated cash (the best type of financing) to invest in new projects to grow and get even more cash in the future.

If they return the cash now, it means there aren’t many viable projects out there, a bleak outlook for the economy. Less investment or R&D spending means no future growth. Usually utilities fit these criteria of low growth and high cash returns. They trade at very low multiples.

This time though, it is precisely growth companies like Apple, IBM, and Exxon that are buying back the most shares and transforming themselves into utilities. This is not good news for the economy or for the market, as stocks that merely pass on their cash flow and don’t grow shouldn’t trade at double-digit valuations.

Yes, companies also have a lot of cash, but net debt has risen to an all-time record at the beginning of 2014. The inflationary tilt of Fed policy pays corporates to lever up their balance sheets with little risk—that is, until policy changes.

Executives know this but could care less, as their compensation is now largely tied to the development of the share price. If they buy stocks to push prices up, everybody is happy, at least in the short-term.