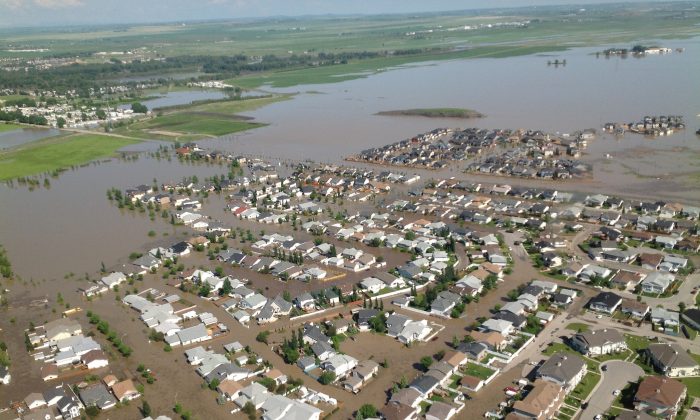 (Town of High River/CC BY 2.0)
Environment

Why Are so Many People Still Living in Flood-Prone Cities?

Over the last 30 years, floods have killed more than 500,000 people globally, and displaced about 650 million more. In a recent paper published by the Centre for Economic Performance, we examined why so many people are hit by devastating floods. We looked at 53 large floods, which affected more than 1,800 cities in 40 countries, from 2003 to 2008. Each of these floods displaced at least 100,000 people from their homes.

Of course, part of the problem is that many cities were originally built near rivers and coastlines. For a long time, these cities’ residents benefited from lower transport costs, because they were close to ports and the trade which occurred there. But these days, modern land transport often makes these historical advantages obsolete, as more cities rely on highways and railways than on ports.

Yet history is not the only reason why flood-prone locations are overpopulated. For one thing, rising sea levels and a changing climate are putting more cities’ residents at risk. And what’s more, new homes are still being built in flood-prone areas around the world.

This is largely because private developers do not bear the full social cost of building on cheap land on flood plains. Instead, governments typically foot much of the bill for building and maintaining flood defenses.

As a result, developers do not take on the full risk of constructing homes in areas that are prone to flooding, and many people looking for new homes for their families move into these buildings. And so, the global population at risk of flooding keeps growing.

To contain this large and growing social problem we should, at the very least, tighten the control over construction in flood-prone areas. Or, even better, home builders who insist on constructing new houses in flood plains should be required to bear the full costs that they impose on society in the long run.

Another part of the problem is that people continue to live in flood-prone locations, even in the aftermath of large floods. There is no widespread movement towards safer areas.

Low-lying urban areas are hit by large floods about three to four times more often than other urban areas. This is partly because some low elevation areas are close to coastlines and rivers. But in fact, our study found that the risk of large-scale flooding is still higher in low elevation areas, even after we adjust for their proximity to these amenities.

Despite this higher risk of flooding, low-lying urban areas concentrate more economic activity than safer urban areas. This is true even in the parts of the world that are prone to extreme rainfall, such as the basins of major South Asian rivers, where the risk of large-scale flooding is particularly high. It is true that farmers in these areas sometimes benefit from the flood soils, but city dwellers generally do not.

Changes to Our Rivers and Floodplains Have Exacerbated Flooding

When cities are devastated by large floods, low-lying areas sustain more damage than other areas. But, like other parts of flooded cities, the low elevation areas recover rapidly. You may think that this recovery is good news. But unfortunately, it means that economic activity does not move to safer areas, so it remains at risk from the next big flood.

And sure enough, the odds of being hit again by a large flood are higher for cities that have already been flooded before—so the cycle of flooding repeats itself.

We are not saying that the rising risk of floods should make people abandon thriving cities. But the pattern of repeated large floods is common even in economically marginal areas, where the case for living on flood plains is not always convincing. In our study we found that even cities that are prone to large-scale flooding often contain higher elevation areas that are safer, and that’s where new construction should take place.

Flooding is a devastating and recurrent problem that afflicts many of the world’s cities. We need better policies to ensure that we do not mistakenly subsidize new construction on the flood plains, so that the problem of flooding does not get any worse—especially as sea levels rise.

Guy Michaels is an associate professor at London School of Economics and Political Science. This article was originally published on The Conversation.