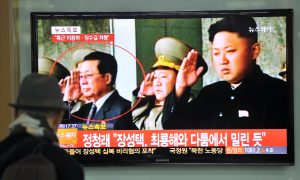 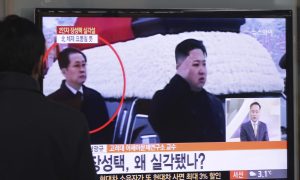 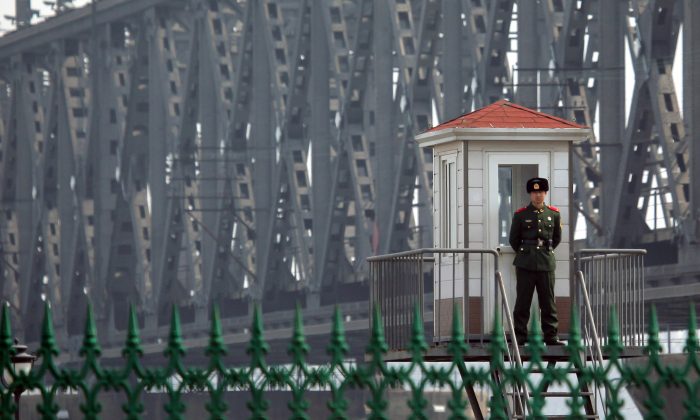 A Chinese border guard standing on a look out post by the bridge that crosses the Yalu river to the North Korean town of Sinuiju across from the city of Dandong on April 6, 2013. (STR/AFP/Getty Images)
Asia & Pacific

China is currently considering repatriating nine young North Korean defectors back to North Korea. In early October, the defectors fled North Korea by crossing the Yalu River to Shenyang and then traveling to the town of Nanning on the Chinese border with Vietnam. They crossed into Vietnam on Oct. 22 but were caught by Vietnamese police and handed over to Chinese authorities  in Dongxing, Guangxi. On Oct. 26, they were taken to Shenyang by train and may now be repatriated back to North Korea where they will likely face punishment and persecution upon their return.

International organizations are calling upon China to uphold their international obligations as a signatory of the U.N. Refugee Convention and not repatriate the nine defectors. Phil Robertson, deputy director of Human Rights Watch, wrote in a statement, “Beijing should abide by its international obligations and allow the nine refugees to settle in a safe country.” Ravina Shamdasani, a spokeswoman for the U.N. Office of the High Commissioner for Human Rights, urged Chinese authorities to disclose where the defectors are and urged Beijing not to repatriate them to North Korea.

China’s decision whether to repatriate defectors has often been contingent on the current health of its relationship with North Korea. Beijing used to repatriate all defectors.

As a signatory of the 1951 Convention and its 1967 Protocol relating to the Status of Refugees, which were enforced respectively in April 1954 and in October 1967, China is obligated to uphold the principle of non-refoulement which states that any “contracting state” shall not expel a refugee “in any manner whatsoever to the frontiers of territories where his or his life or freedom would be threatened.”

However, China has allowed an agreement with North Korea, titled the “Protocol between the PRC Ministry of Public Security and the DPRK Social Safety Ministry for Mutual Cooperation in Safeguarding National Security and Social Order in Border Areas” signed in July 1964 to supersede its international obligations.

Olivia Enos, a research associate in the Asian Studies Center at The Heritage Foundation, stated:

“Justice Michael Kirby, the lead U.N. investigator for the COI [Commission of Inquiry], said that the persecution of religious minorities, in particular Christians, in one of the least discussed findings of the report. As a global leader on international religious freedom, the U.S. can do more to hold North Korea accountable for its egregious violations of religious liberty.”

The United States can and should do more to hold China accountable for repatriating North Korean defectors and should vocally express its opposition to the brutal resending of them certainly facing harsh punishment.

Inkyeong Yun is a member of the President’s Young Korean Leader’s Training Program at The Heritage Foundation. Copyright The Daily Signal. This article was previously published on DailySignal.com.