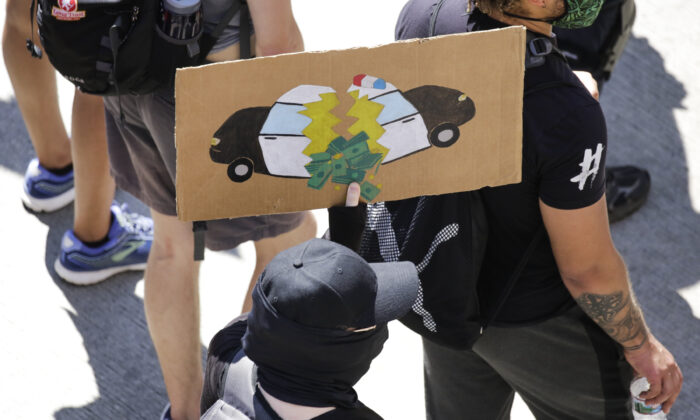 A protester carries a sign during a "Defund the Police" march from King County Youth Jail to City Hall in Seattle, Wash., on Aug. 5, 2020. (Jason Redmond/AFP via Getty Images)
Viewpoints

Why Are Many Police Officers Being Murdered?

An increasing number of Democrats are busy distancing themselves from calls to “defund” the police. But, some would argue, the damage has already been done.

For years, those on the left have vilified police officers, painting them in an unfair, even malicious light. With such crude generalizations fueled by mainstream media outlets, millions of Americans have lost faith in the police force.

On a recent episode of “60 Minutes,” FBI Director Christopher Wray discussed the state of policing in the United States. More specifically, he discussed how police officers are targeted explicitly by violent criminals. Last year, according to Wray, 73 officers were killed; that’s an average of one death every five days. Compared to 2020, this represented a 59 percent increase in police murders.

When asked why there was such a worrying spike, Wray gave three reasons. First, there are “more and more juveniles committing violent crime.” Second, the country is “seeing a certain amount of gun trafficking, interstate gun trafficking. That’s part of it.” Finally, “we’re seeing an alarming frequency of some of the worst of the worst getting back out on the streets,” he said.

Officers on patrol find themselves being shot in the streets; others are being ambushed, he warned. “Wearing the badge shouldn’t make you a target,” Wray said.

Sadly, though, it does. How did we get here?

Because criminals have been given license to act with impunity.

In Chicago, the final weekend of April saw 37 shootings; seven people lost their lives. Although this was Chicago’s most violent weekend of the year, violent weekends in the Windy City are very much the norm. The city’s mayor, Lori Lightfoot, once a staunch supporter of “defunding the police,” is now looking to fund officers. Again, though, the damage has already been done. Now police officers find themselves the victims of coordinated attacks; two officers were recently gunned down while they ate lunch.

According to a recent Gallup poll, 53 percent of Americans say they worry a “great deal” about the increase in violent crime. Their worries are completely justified. As rates of violent crime continue to rise and shootings in the country’s large cities continue to become more common, expect more Americans to become concerned—especially those who find themselves living in Democratic-run big cities. Politicians on the left stand accused of being soft on crime. Considering the 10 most dangerous cities in the United States are run by Democrats, it’s hard to disagree.

St. Louis is the country’s most dangerous city, according to a study by personal finance tech firm MoneyGeek. City officials plan to cut more than $4 million from the police budget. The plan, which the Washington Examiner first reported, also sought to remove close to 100 vacant officer jobs.

According to Mayor Tishaura Jones, the plan sought to “address the root causes of crime and support the victims of crime as well as those who have been underserved and underrepresented.”

How does the removal of funding for officers make anyone—except criminals—safer?

Calls to “defund the police” are ludicrous; nevertheless, some prominent authors insist that it’s the only way to ensure community safety.

Britt is not the only one who sees the value in defending—rather than defunding—the police. As I have noted elsewhere, a big part of the problem facing officers—besides lack of support from politicians and the mainstream media—is the workload. Many officers are overworked; 12-hour shifts are the norm. A grueling, largely thankless job, officers are burned out. And this problem looks likely to get worse before it gets better.

What can be done? How about hiring more police officers to help current recruits deal with the workload?

On April 25, the Minnesota Senate pledged to do just that and also voted in favor of harsher penalties for violent offenders. The new plan will pump at least $200 million into the funding of local law enforcement agencies.

The bill’s sponsor, Sen. Warren Limmer, said: “This is not the time to build huge bureaucracies. This is a time to react to the criminal threat that’s endangering our innocent citizens.”

Indeed. Perhaps more politicians should take heed. The American people are fed up with the state of the country, the fact that agents of lawlessness get preferential treatment over law enforcement agents.

To make America safer again, we must first allow officers to breathe again; we must allow them to do the jobs they were hired to do.