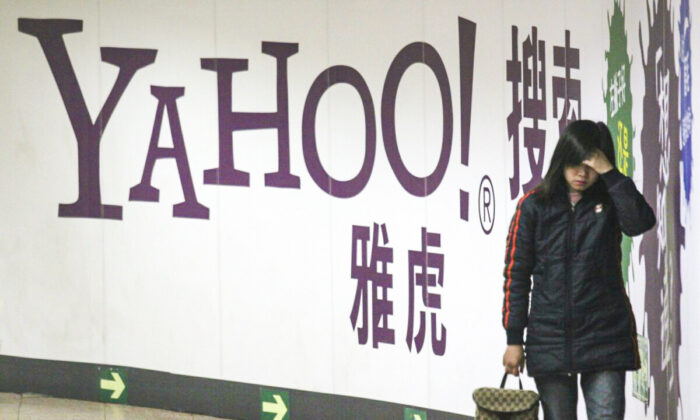 A woman walks past a Yahoo billboard in a subway in Beijing, China, on March 17, 2006. (AP Photo)
China Business & Economy

Why Are Foreign Tech Firms Pulling Out of China?

HONG KONG—Yahoo Inc. is leaving the China market, suspending its services there as of Monday amid what it says is an “increasingly challenging” business and legal environment.

Foreign technology firms have been pulling out or downsizing their operations in mainland China as a strict data privacy law specifying how companies collect and store data takes effect.

Such companies have decided the regulatory uncertainty and reputational risks outweigh the advantages of staying in the huge market.

Yahoo Inc. said in a statement Tuesday its services in China stopped as of Nov. 1. Users visiting the Engadget China site run by Yahoo this week find a popup notice saying the site will not publish any new content.

Last month, Microsoft’s professional networking platform LinkedIn said it would shutter the Chinese version of its site this year and replace it with a jobs board with no social networking functions.

Epic Games, which operates the popular video game Fortnite, also says it will pull the game out of the China market as of Nov. 15. The game was launched in China v,ia a partnership with the China’s largest gaming company, Tencent, which owns a 40 percent stake in Epic.

Why Are Companies Leaving China Now?

The Personal Information Protection Law that took effect on Nov. 1 limits the amount of information companies are allowed to gather and sets standards for how it must be stored. Companies must get users’ consent to collect, use or share data, and provide ways for users to opt out of data-sharing.

The new law raises costs of compliance and adds to uncertainty for Western companies operating in China. Companies caught flouting the rules could be fined up to 50 million yuan ($7.8 million) or 5 percent of their yearly revenue.

Chinese regulators have cracked down on technology companies, seeking to curb their influence and address complaints that some companies misuse data and engage in other tactics that hurt consumers’ interests.

The downsizing and departures also come as United States and China tussle over technology and trade. Washington has imposed restrictions on telecoms equipment giant Huawei and other Chinese tech companies, alleging they have ties with the Chinese military and the Chinese regime.

Local companies are also feeling the heat, with e-commerce companies like Alibaba facing fines. Regulators are investigating some companies and have imposed strict rules that affect gaming firms like NetEase and Tencent.

What Other Hurdles Do Foreign Tech Companies Face in China?

The Chinese communist regime operates what is known as a “Great Firewall” which uses laws and technologies to enforce censorship.

Content and keywords deemed politically sensitive or inappropriate must be scrubbed from the internet. Companies must police their own platforms, deleting posts, and making sensitive keywords unsearchable.

Western social media networks such as Facebook and Twitter have long been blocked by the Great Firewall and are generally not accessible for people in mainland China.

“China has installed a very draconian policy governing internet operators, telling them what to do and especially what not to do,” said Francis Lun, CEO of GEO Securities Limited in Hong Kong.

“I think the question comes down to why bother (operating as a foreign company in China) with such a limited return, and such heavy liability,” he said.

“Fortnite’s exit is particularly damaging, as it shows not even a close partnership and investment with Tencent is enough to make the business case work,” he said.

Foreign tech companies operating in China also face pressure from their home markets. Some U.S. lawmakers criticized LinkedIn’s censorship of U.S. journalist profiles in China. In 2007, Yahoo Inc. was lambasted for handing over information on Chinese dissidents to the Chinese regime that eventually led to their imprisonment.

What Does This Mean for Internet Users in China?

Chinese alternatives have popped up over the years to fill the void left by foreign social media platforms that have given up operating under the Great Firewall.

Instead of Google, China’s most popular search engine is Baidu. Messaging apps like WeChat are used instead of WhatsApp or Messenger. Weibo, a microblogging platform, is the closest equivalent to Twitter, with more than 560 million Chinese users.

Unless they use a virtual private network (VPN) to mask their internet traffic and location and circumvent the web restrictions Chinese have fewer options for social networking and access to content and are likely to turn to strictly censored local alternatives.