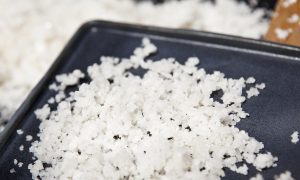 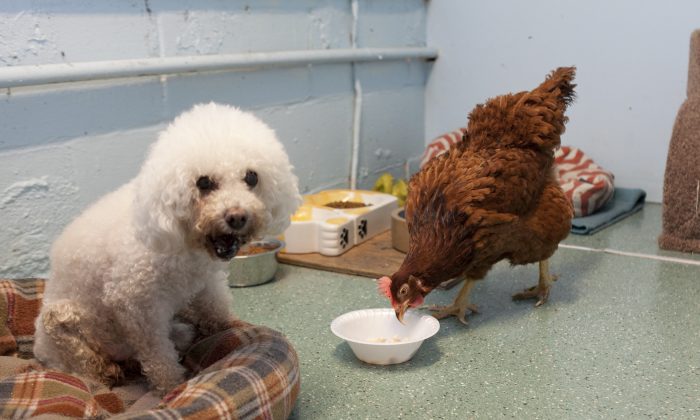 Why Are Chickens Crossing NYC Roads?

NEW YORK—Marsha was found abandoned by the waterside near Grand St. Park three years ago. The 6-year-old is too old to send to a wildlife center because she would likely get euthanized, so the hen is spending the remainder of its life in a dogs and cats animal shelter.

Brooklyn Animal Resource Coalition (BARC), a no-kill animal shelter in Williamsburg, keeps Marsha in their cat room. She roams freely across the room, stealing food from the Poodle’s dish and getting into arguments with the Yorkshire Terrier.

“BARC shelter is primarily a shelter for cats and dogs—we only have chickens because the neighborhood leaves them around or dumps them at our door,” said BARC manager Robert Vazquez. They are currently caring for three chickens, two of which are healthy enough to find new homes.

BARC, like many other shelters in New York, has been receiving abandoned chickens at their doorsteps steadily for the past few years.

With the rise of urban farming, followed by the realization that chicken keeping is not feasible for everyone, New York shelters have reached their capacities with chickens.

“I don’t think we plan on getting any more, they are much different to take care of than dogs and cats,” Vazquez said.

The shelter holds on to the chickens until an animal sanctuary or a wildlife rehabilitation center nearby has an opening.

But farm sanctuaries in upstate New York—and even some as far away as Vermont—are running out of space due to the influx of chickens abandoned in New York City in recent years.

The Farm Sanctuary in Watkins Glen, N.Y., has taken in 300 chickens from New York City alone in the past 6 years, according to National Shelter director Susie Coston.

“It’s constant. We are constantly getting hens from the city or just outside of the city,” said Coston, who has been with the sanctuary since 2000. “It’s even more of a problem at local shelters in Los Angeles.”

During one incident in 2008, a man had left a group of around 30 chickens at a bus stop in Harlem. Most of them were eventually taken to the Farm Sanctuary.

Why Are Chickens Crossing NYC Roads?

Backyard chicken keeping has become increasingly popular in the past few years, as socially-conscious New Yorkers began raising their own hens to avoid buying eggs from farms who raise hens in crowded environments.

But their humane efforts may lead to inhumane consequences, as a hen stops laying as many eggs after two years.

“When you only look at hens as a provider for eggs, what are you going to do with them after two years? Slaughter them or dump them in a shelter? Put them on Craigslist?” Coston said. “There’s people doing that.”

Some urban farmers also abandon their fowls when they realize keeping chickens isn’t a cheaper alternative to buying eggs.

But vet exams can cost over $100 per visit, according to Humane Society of the United States.

Annual costs per bird for food, bedding, nutritional supplements, hygiene supplies, permit fees, and utilities can cost around $300, according to Chicken Run, an organization that overlooks urban chicken rescue in Minneapolis

Also, it is difficult to tell the gender of baby chick. Many times, urban farmers think they bought a female baby chick, only to find out they have a rooster on their hands—which are illegal to keep in New York City.

For the above reasons, many urban farmers want to get rid of their chickens.

Most hesitate to slaughter and shelters are at capacity, so many chicken are let go in parks.

“People let them go thinking it’s a better option but chickens are domestic animals, but they’re not close to being able to survive in the wild,” Coston said

Paul Nelson, spokesperson for Prospect Park, said they received a call last Thursday that a lone chicken was roaming in the park.

“But somebody took it before the park rangers could get to it,” Nelson said.

Coston said chickens abandoned in the parks often get eaten by dogs or taken home by a meat lover.

In the most humane scenarios, they are picked up by park rangers or civilians who contact a shelter or wildlife rehabilitation center.

When there is space, the Farm Sanctuary takes the chickens in and give them a veterinarian check-up before finding them a new home.

Farm Sanctuary carefully screens potential homes for chickens to make sure they won’t be killed and eaten.

A lot of the chickens abandoned are “spent hens,” or hens that are too old to lay eggs.

“Hens can live up to another 10 years after they stop laying eggs, but people don’t want them anymore when they stop,” Coston said.

“We have some homes lined up for hens, but the biggest issue is the roosters,” she said. They also work with other sanctuaries, some that specialize in housing roosters due to the large proportion that are abandoned.

“Most roosters end up becoming resident roosters, and all the shelters are getting to point where we have too many, but we know more will still be coming,” Coston said.

Miriam Jones, co-founder of Veganism is the Next Evolution (VINE), an animal sanctuary in Vermont, said they are also at full capacity with chickens.

It’s a first-come-first-served sanctuary, so they receive animals from all around the country. She estimates around 20 percent of the roosters they receive were abandoned in New York City.

They have around 100 roosters in their two locations, and she said the number they are receiving is growing each year due to the misperceptions of novice urban farmers.

“Anywhere in New York City that allows backyard birds is an area where roosters are being dumped,” Jones said. “The issue of abandoned chickens from New York City is existentially increasing … it has accelerated in recent years.”

“We have gotten a few calls from people that found chickens in Brooklyn, particularly in Prospect Park. We received calls for two chickens a few days ago,” Henderson wrote in an email.

Henderson said they don’t have the resources to look after chickens and redirects them to wildlife rehabilitation centers in New York or Pennsylvania.

Animal Care & Control of NYC (AC&C) is also taking in abandoned chickens and redirecting them. In 2012, they took in 135 chickens. In 2013 so far they have taken in 84, according to Richard Gentles, Director of Communications at AC&C.

The situation could go two ways—the city either helps provide resources and educational opportunities to help novice chicken keepers, or bans chicken keeping, like many local governments have across the nation.

“The solution is either to have 20,000 more sanctuaries in the world, or ban people from keeping chickens,” said Jones from the VINE sanctuary.

Several cities throughout the country have banned backyard chicken keeping, while legislation has been proposed in others.

Weatherford City Council in Texas voted on July 9 against the legalization of backyard chicken keeping.

A group called the Arlington Egg Project in Virginia is trying to lift the chicken ban in Arlington—so far without success.

But others argue there just needs to be a more systematized organization to provide resources.

Beekeeping in New York City was illegal from 1999 through to 2010. Andrew Coté founded the New York Beekeeping Association (NYCBA) in 2008. He and organizations such as Just Foods played an instrumental part in the legalization of New York City beekeeping in 2010.

According to Coté, beekeeping was made illegal because there was a lack of education about beekeeping. People became frightened at the possibility of encountering swarms—which don’t happen often, he added—and don’t know where to turn to for help.

NYCBA takes care of swarms, provides free guidance and tips on how to beekeep, picks up unwanted beehives so that they are not left unattended, as well as other honey bee-related issues.

NYCBA works with the local government, since all New York City beekeepers must register their hives with the NYC Department of Health. This way, it is easier to keep track of who has beehives and who needs what kind of help.

“The real problem is the lack of education,” Coté said. “The local government should help with this [chicken keeping] situation.”

It seems that currently the main organization that is looking after chicken keepers in New York is Just Food’s City Chicken Project.

They provide workshops on chicken care, soil health and cover crops, as well as other resources.

But Just Foods doesn’t seem to have the capacity to solve the chicken run problem.

At City Hall, there are no talks of banning chickens or adding chicken keeping resources into the budget.

“We have not received any calls to my knowledge from constituents about this issue, there is no talk of an urban chicken ban at city council,” said Malcolm Sanbourn-Hum, public relations director for Council member Diana Reyna.

Reyna is the representative for Williamsburg and Bushwick, Brooklyn, where there are many backyard chicken keepers.

Coston from Farm Sanctuary suggested chicken keeping might be a fad.

“These things happen. A few years ago, there was an influx of pot belly pigs at Farm Sanctuary.” Coston from Farm Sanctuary said. “There’s always an influx of ducks after Easter. Everyone wants every animal until they realize it’s not fun to keep them.”