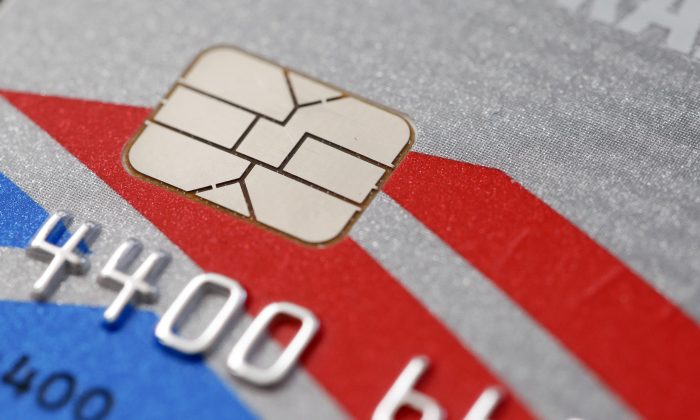 Why Americans Are Getting New Credit Cards

NEW YORK—A big change is happening inside your wallet.

U.S. banks, tired of spending billions each year to pay back fleeced consumers, are in the process of replacing tens of millions of old magnetic strip credit and debit cards with new cards that are equipped with computer chips that store account data more securely.

By autumn, millions of Americans will have made the switch from the old magnetic strip cards. That 50-year-old technology, replaced in most of the world, lingers on the back of U.S. cards and is easily copied by thieves, leaving people vulnerable to fraud. Roughly half of all credit card fraud happens in the United States even though the country only makes up roughly 25 percent of all credit card transactions, according to a report by Barclays put out last week.

This entire switch is a massive undertaking. Roughly half of all U.S. credit and debit cards will be replaced by the end of the year. Tens of thousands of individual merchants need to upgrade their equipment to allow for “chip-and-sign” transactions instead of “swipe-and-sign” ones. If the stores aren’t ready, they could be on the hook to cover the cost of fraud.

Here’s how the new cards work and how the switch could affect you at the checkout counter:

What’s Different About These Cards?

The biggest difference between your old card and your new one is the metal chip embedded on the front, which means your personal data is much safer. The chip assigns a unique code for every transaction made on your card. Even if a thief acquired that code, it couldn’t be used to make another purchase.

Chip cards are also harder to duplicate, although it’s not unheard of. Overall, the chip cards are more secure than magnetic cards, which are vulnerable because once thieves get a copy of your credit card information, it can be quickly copied onto counterfeit cards.

Chip cards have been common in Europe for more than a decade, and they’ve been standard in other parts of the world for some time.

“The chip technology is designed to prevent copying of the card,” says Ellen Richey, vice chairman of risk and public policy at Visa.

Banks are in the middle of issuing chip-based debit cards, with Bank of America starting late last year and Chase and Citi starting this summer.

In the United States, chip-embedded cards have seen limited use until now. Laundromats, for instance, are one place chip-reading cards are being used.

When Will I Get One?

At this point, the majority of magnetic strip credit cards have been replaced with chip cards. Banks are in the middle of issuing chip-based debit cards, with Bank of America starting late last year and Chase and Citi starting this summer. Regional and smaller banks are also rolling out these cards to their customers, most of them starting later this year.

All chip cards also come with a magnetic strip in case chip readers aren’t available. However, if a merchant does accept chip cards for purchases, you should use that option every time because it’s more secure.

Who’s Behind the Change?

The change is mostly coming from banks and payment processing companies—Visa, MasterCard, and American Express—which have generally been on the hook for any fraud that happens on their cards and networks.

Originally the payment networks were relying on their own software to catch fraud at the point of sale in the United States, but it became clear that something more was needed, Richey said. Banks, particularly small banks, would often pay out of pocket to cover any fraud that happened on their customers’ payment cards.

The American Bankers Association estimated that bank account fraud cost the industry $1.74 billion in 2012, the most recent year the data is available.

The new cards won’t work quite the same way they do in Europe, but they’re a step closer.

The payment networks have set a soft deadline of Oct. 1, 2015, for the switchover to be made. After that date, most merchants who continue to accept magnetic strip cards and have not upgraded their equipment could have to pay for any credit or debit card fraud that happens in their stores. The “liability shift,” as it’s called, presents a looming deadline for the banks, payment companies, and merchants.

How Do I Use the Chip Card?

Instead of swiping your card at the checkout, you’ll insert it into a machine with a slot like those on ATMs. Your card will stay in the slot until the machine tells you to remove it. Unlike magnetic strip cards, chip cards need to be left in the machine for a few seconds to work.

You can use it now. The problem is that merchants need the right equipment to accept the cards embedded with chips. Many stores have been slow to upgrade their equipment, despite the October deadline, because it could be a significant expense to replace equipment and retrain employees. Payment processing companies like Visa, and banks that issue the cards, are pushing stores to accept the chips cards. Visa expects roughly half of all merchants to have chip card readers by the end of the year.

It would work similar to your ATM card now. You would insert your card and enter a four-digit password to approve the transaction. Security experts believe this is a very safe way to pay for things. Signing for a credit card purchase provide near-zero security since signatures vary and are rarely checked.

What Could Go Wrong in October?

From a consumer perspective, there is little to worry about. The biggest issue is for the merchants, who are way behind replacing their equipment in time for the deadline.