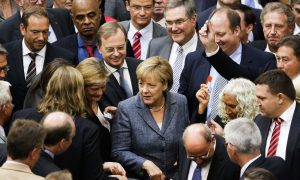 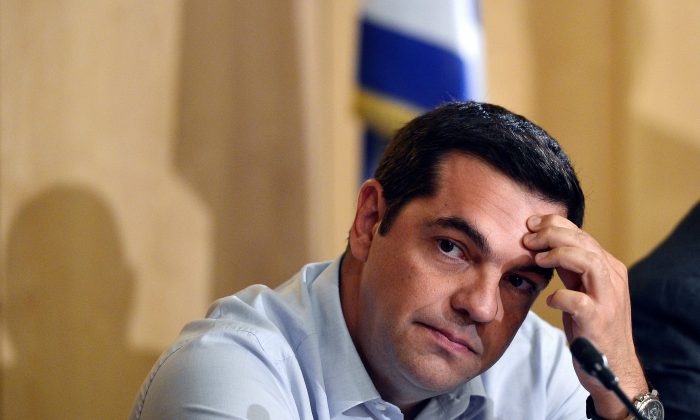 Greek PM Alexis Tsipras in a press conference at the Greek Ministry of Infrastructure, Transport, and Networks in Athens on Aug. 12, 2015. (Louisa Gouliamaki/AFP/Getty Images)
Opinion

Why Alexis Tsipras Has Called a Snap Election in Greece

Alexis Tsipras, the prime minister of Greece, has announced he is stepping down and has called a snap election for Sept. 20, less than a year since he took office as the leader of the left-wing coalition Syriza.

The move marks another episode in the long-running and seemingly never-ending Greek crisis. It is evidence of the pitfalls of Tsipras’s populist discourse. His strategy has rendered Greece almost ungovernable for more than a year.

Since the Greek crisis of 2010, Tsipras had accused previous Greek governments and opposition members of subservience to Germany’s austerity program. His anti-austerity and pro-euro platform won him the January 2015 elections with 36 percent of the vote and almost half the seats in Parliament.

However, Tsipras failed miserably in delivering this promise. After seven months of political theater and erratic brinkmanship, Tsipras signed the most austere bailout program yet, lasting until 2018.

Tsipras failed miserably in delivering this promise … [and] signed the most austere bailout program yet, lasting until 2018.

Splinters on the Left

Calling the election, Tsipras spoke of two key signs of his government’s success—the latest austerity package and the return to normality of the Greek banking system.

This is yet another example of his demagogic politics: the man who railed against austerity is now defending a new bailout program that will result in more austerity. The man who implemented the closure of the Greek banks and the imposition of capital controls boasts that Greek banks will be functioning as they should sometime in the future.

The decision to call this election was dictated mostly by internal party politics. Syriza brings together socialists, Maoists, communists, and disillusioned social-democrats (who constitute the minority in the party).

The decision to call this election was dictated mostly by internal party politics.

The largest leftist group in Syriza, the radical pro-socialist and pro-Russia Left Platform led by Marxist-Socialist MP Panayiotis Lafazanis, could not accept Tsipras’s U-turn. Its members have rejected the government’s new pro-euro policy.

Left Platform’s MPs have been openly against the euro and EU membership. They want Greece to turn to Putin’s Russia for help. Tsipras has only been able to hold power thanks to support from the vilified opposition parties New Democracy, The River, and PASOK.

Lafazanis has now announced plans to launch a new party called “Popular Unity,” which will call for the return to a national currency and immediate default on the Greek debt. It should be noted that the only other party openly supporting a euro-exit is the Neo-Nazi Golden Dawn.

What Next for Syriza?

Syriza’s breakup marks the end of a symbiotic relationship between the Left Platform and “Proedrikoi” (in Greek: the men of the president).

These groups tolerated each other while in opposition. The hard-left Syriza members provided the organizational and activist militancy, while the Proedrikoi brought the populist flair of Tsipras. Even now, he remains the most popular party leader in Greece.

So far, it seems that his populist strategy is working, but nobody knows how the disillusioned Greeks will react on Election Day when Tsipras asks them to support him for another three years of austerity. It would be safe to assume, however, that like an ancient Greek demagogue, he will manage to persuade Greeks to trust him again in another uncertain trip toward normality.

The best option for Tsipras would be to abandon his populism and demagoguery.

The best option for Tsipras would be to abandon his populism and demagoguery. He should be honest with Greek voters about the need for painful and unpopular reforms, such as better tax collection, pension, and labor market regulation, reduction of clientelism, and an increase of Greek competitiveness to attract foreign investment.

This would be a truly revolutionary move—a word he and other Greek politicians have used and abused. As George Orwell wrote in his novel 1984: “In a time of universal deceit—telling the truth is a revolutionary act.”

Sotirios Zartaloudis is a lecturer in politics at the University of Birmingham in the U.K. This article was previously published on TheConversation.com