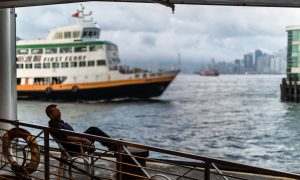 Why a Novel on War With China Has the Pentagon Talking

History may have played out differently if world leaders had listened to the warnings of an author in 1914. Problems the world would soon face were detailed by Sir Arthur Conan Doyle, creator of the fictional detective Sherlock Holmes, in his short story “Danger!” just 18 months before World War I.

Doyle presented a fictional war where an imaginary country fights and defeats Britain. The tool that makes this possible was the submarine, which at the time was just becoming a practical weapon. Soon after, the German U-boat became one of the most dangerous weapons in World War I and World War II.

Now, a book about a fictional war between the United States, China, and Russia is taking a similar approach. And already, it is receiving a surprising amount of attention from the Pentagon and defense community.

Like Doyle’s warning, “Ghost Fleet: A Novel of the Next World War,” by P.W. Singer and August Cole, is not entirely fictional. While it’s set in the 2020s, it takes the weapons, budget cuts, and strategies now emerging in today’s world, and shows where things could very well be heading in five years.

‘Ghost Fleet’ has 374 end-notes on emerging technology and trends that ground the story in hard reality.

“We’re seeing the emergence of an array of technology that was only recently science fiction,” said Singer, in a phone interview.

“Ghost Fleet” highlights some of the emerging weapons of today’s world that will likely shape tomorrow’s wars, from cyberwarfare to drones, and from artificial intelligence to virtual reality. And like Doyle’s warning to Britain, it similarly warns that the United States may not be prepared.

The authors know the subject well. Singer is a strategist at the New American Foundation and writes about emerging Chinese weapons for the “Eastern Arsenal” blog at Popular Science. Cole is a former defense reporter for the Wall Street Journal.

It’s partly because of Singer and Cole’s expertise that the novel is being taken as more than just entertainment.

Speaking tours for the book have included presentations to 600 naval officers graduating from the Naval War College, and small-scale discussions with people in the Pentagon, in addition to the usual folks in the media.

Among the book’s blurbs is Admiral Jonathan Greenert, the Chief of U.S. Naval Operations, calling it “a page turner…Thoughtful, strategic and relevant.”

The former NATO Supreme Allied Commander, Admiral James Stavridis, writes it’s “a startling blueprint for the wars of the future and therefore needs to be read now!”

A lot of military officials have found it useful, powerful, and illustrative.
— P.W. Singer, co-author of 'Ghost Fleet'

Most significantly, the book also shows what a war with the Chinese regime would look like—with its strategies built around weapons and an approach to war that still get little attention in the West.

It’s the kind of book meant to jar readers—especially those familiar with draft Chinese strategies—with the hard truth that yes, they could do this, and no, we wouldn’t be prepared.

The authors also did their research. “Ghost Fleet” has 374 end-notes on emerging technology and trends that ground the story in hard reality.

Singer said the book is a “smash-up between fiction and non-fiction” that “uses fiction to explore real-world technology and issues.”

“People are liking it, frankly as a summer beach read—it’s getting nice reviews as a novel,” he said. “But a lot of military officials have found it useful, powerful, and illustrative.”

Already, “Ghost Fleet” has seen some of its predictions unfold. The book opens with a scene where a P-8 Poseidon surveillance plane is angrily warned away by a Chinese military officer over the radio, which Singer notes was written 18 months ago.

In March, a similar scene played out. The U.S. Navy flew a P-8 Poseidon aircraft over the Fiery Cross Reef in the South China Sea. A Chinese military officer came over the radio, and angrily warned them to leave.

Singer said the development was bitter-sweet. While he was glad the predictions in the book are accurate, it’s not a trend he and Cole would like to see from a novel about World War III.

But this is also why Singer wanted to write the “Ghost Fleet.” While on one hand it’s a work meant to entertain, on the other it’s a warning to U.S. leaders of military developments in China designed to win a war against the United States.

It dispels the notion that trade and diplomacy between the United States and China will avert a real conflict.

Part of this is the Chinese regime’s “Assassin’s Mace” program, which is designed to fight a technologically superior adversary. The program includes cyberwarfare, space warfare, and other systems that could disable the fighting ability of the U.S. military.

“We use the phrase asymmetrical warfare to refer to people going after our weaknesses,” Singer said. “Assassin’s Mace turns strengths into weaknesses.”

He noted that while many experts are calling the alleged Chinese breach of the Office of Personnel Management the “Cyber Pearl Harbor,” the breach is nothing compared to what a real military cyberattack would look like—and the novel shows such an attack in realistic detail.

Such an attack, Singer said, would very quickly move a war beyond borders, and into the homelands of rival nations “in ways we’ve never seen before.”

The focus isn’t just on the military side, either. It also dispels some of the common notions that trade and diplomacy between the United States and China will avert a real conflict.

Most notably, he said, “the United States didn’t have this trade relationship with the Soviet Union.”

If history is factored in, however, such ties could mean little. Singer said, “France and Germany were each other’s greatest trading partners, but they still went to war.”

The Chinese Military Is Practicing to Invade Taiwan With Ferries

By showing where things are heading, while also showing how similar issues have played out in the past, “Ghost Fleet” is able to create a more complete picture of the real threats facing the United States and the world today.