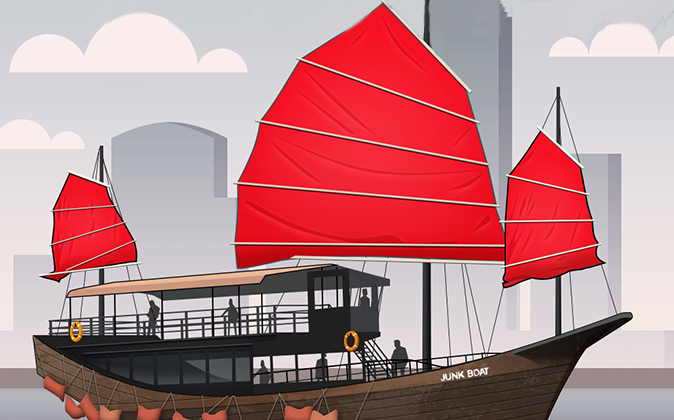 Why a 2,000-Year-Old Chinese Ship Design Still Holds Up

Almost a century before Columbus sailed the ocean blue to America, Chinese admiral Zheng began the first of seven expeditions to explore the southern seas. Together with his 30,000 sailors and 300-ship fleet, Zheng’s travels took him through the Malay and Indonesian islands, along the Indian and Arabian coasts, all the way down to the Cape of Good Hope—the southern tip of Africa.

Zheng He’s principal vessel was the junk, a ship design pioneered about 2,200 years ago, or around the time of China’s first imperial dynasty. These boats are fast, possess good handling, and can be sailed against the wind with ease. They were also the first vessels in history to make use of the sternpost rudder, an innovation that would reach Europe only after centuries of use in China.

By the time of Zheng’s intercontinental voyages, the junk had grown not just in sophistication but in size as well. Compared with the 62-foot, 3-mast Santa Maria that Columbus used to reach America, the largest ships of the 15th-century Chinese fleet were giants 400 feet in length. Nine masts held the sails used to propel these grand vessels.

Despite its utility, the junk remained a mystery outside East Asia and had little impact on Western shipbuilding. The Chinese knew that the junk was an excellent design and guarded its secrets carefully. Emperors passed laws banning the sale of junks to foreign buyers, and for a long time this vessel allowed Chinese merchants to dominate Indian and Pacific ocean sea lanes.

Though Zheng He’s voyages were made in peace, the large junks proved their naval worth in the 17th century, when the Chinese rebel admiral Zheng Chenggong, better known as Koxinga, led a fleet of 400 junks and 25,000 men to conquer the island of Taiwan from the Dutch. Imperial Chinese forces eventually got control of Taiwan and held it until 1895, when it was taken by the Japanese.

Between 1846 and 1848, a junk called the Keying sailed from China to the United States and Britain via the Indian and Atlantic oceans. It passed around Cape Horn to reach its destinations. The London press praised the ship’s ability to travel between Britain and the United States in just 21 days.

While the junk is undoubtedly associated with the Chinese maritime tradition, Hong Kong is arguably its true home, as described in an article on the travel website HotelCub. For centuries, this southern Chinese territory’s unique geography and landscape contributed to many of the elements that made the junk so innovative for its time. Junks connected the “intricate network of ports, bays, harbors, and islands in Hong Kong to the vast river network leading into the mainland, while also allowing traders to easily reach Taiwan, Vietnam, Indonesia, Malaysia, the Philippines, and Japan.”

Though superseded by modern vessels for major shipping, junks are still widely used throughout China for fishing, commuting, trade, travel, and tourism. Sturdy and simple, they differ little from their traditional forms, perfected centuries in the past.

A good example of a surviving traditional junk is the Mon Lei, built in 1890 in Hong Kong. In the late 1930s, it made appearances in San Francisco; near the start of World War II, it was removed from China permanently to escape the Japanese and was purchased in 1946 by Robert Ripley of “Believe It or Not!” fame. Ripley used the craft for promotional and advertising events on the East Coast. The Mon Lei is 50 feet long and constructed of teak wood. Originally built for a Chinese warlord, it was decorated with elaborate carvings depicting scenes from Chinese folklore.