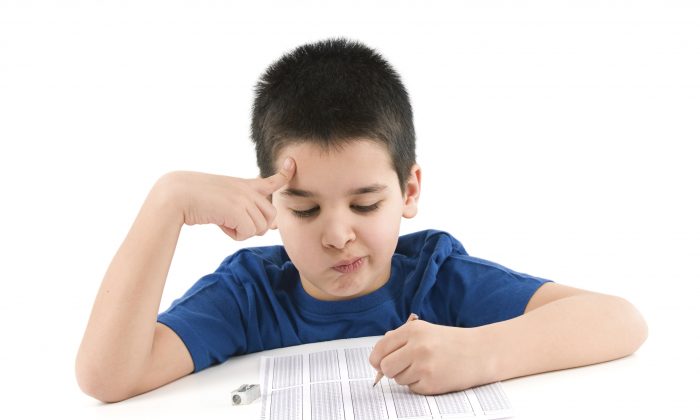 When I was an elementary school student, schools in my hometown administered IQ tests every couple of years. I felt very scared of the psychologist who came in to give those tests.

I also performed terribly. As a result, at one point, I was moved to a lower-grade classroom so I could take a test more suitable to my IQ level.

Consequently, I believed that my teachers considered me stupid. I, of course, thought I was stupid. In addition, I also thought my teachers expected low-quality work from a child of such low IQ. So, I gave them what they expected.

Had it not been for my fourth grade teacher, who thought there was more to a person than an IQ test score, I almost certainly would not be a professor today.

You might think things have gotten better. Not quite. I have two generations of children (from different marriages), and something similar happened to both my sons: Seth, age 36, now a successful entrepreneur in Silicon Valley, and Sammy, age four.

Some children as young as Sammy take preschool tests. And almost all our students – at least those wanting to go on to college – take what one might call proxies for IQ tests – the SAT and ACT – which are IQ tests by another name.

Testing is compromising the future of many of our able students. Today’s testing comes at the expense of validity (strong prediction of future success), equity (ensuring that members of various groups have an equal shot), and common sense in identifying those students who think deeply and reflectively rather than those who are good at answering shallow multiple-choice questions.

How should today’s students be assessed?

Psychology professor Douglas Detterman and his colleagues have shown that the SAT and the ACT are little more than disguised IQ tests.

They may look slightly different from the IQ tests, but they closely resemble the intelligence tests used by Charles Spearman (1904), Alfred Binet and Theodore Simon (1916), famous psychologists in Great Britain and France, respectively, who created the first IQ tests a century ago.

When your kids (or colleagues) misbehave, does anyone give you five options, one of which is uniquely correct, to solve the problem of how to get them to behave properly?

Or, are there any multiple-choice answers for how to solve serious crises, whether in international affairs (eg, in Syria), in business (eg, at Volkswagen) or in education (eg, skyrocketing college tuitions)?

How Do We Test for Success?

The odd thing is that we can do much better. That would mean taking into account that academic and life success involves much more than IQ.

In my research conducted with my colleagues who include Florida State University professor Richard Wagner and a former professor at the US Military Academy at West Point, George Forsythe, we found that success in managerial, military and other leadership jobs can be predicted independent of IQ levels.

More generally, we have found that practical intelligence, or common sense, is itself largely independent of IQ. Moreover, my research with Todd Lubart, now a professor at the University of Paris V, has shown that creative intelligence also is distinct from IQ.

My colleagues and I, including Professor Elena Grigorenko at Yale, have shown in studies on five continents that children from diverse cultures, such as Yup’ik Eskimos in Alaska, Latino-American students in San Jose, California, and rural Kenyan schoolchildren, may have practical adaptive skills that far exceed those of their teachers (such as how to hunt in the frozen tundra, ice-fish, or treat parasitic illnesses such as malaria with natural herbal medicines).

Yet teachers – and IQ tests – may view these children as intellectually challenged.

What Are We Testing, Anyway?

Our theory of “successful intelligence” can help predict the academic, extracurricular and leadership success of college students. In addition, it could increase applications from qualified applicants and decrease differences among ethnic groups, such as between African-American and Euro-American students, that are found in the SAT/ACT.

The idea behind “successful intelligence” is not only to measure analytical skills as is done by the SAT/ACT, but also other skills that are important to college and life success. Although this does mean additional testing, it is an assessment of strength-based skills that actually are fun to take.

What are these other skills and assessments, exactly?

The truth is, you can’t get by in life only on analytical skills – you also need to come up with your own new ideas (creativity), know how to apply your ideas (practical common sense), and ensure they benefit others beside yourself (wisdom).

So, assessments of “successful intelligence” would measure creativity, common sense and wisdom/ethics, in addition to analytical skills, as measured by the SAT/ACT.

Here is how measurement of successful intelligence works:

Creative skills can be measured by having students write or tell a creative story, design a scientific experiment, draw something new, caption a cartoon or suggest what the world might be like today if some past event (such as the defeat of the Nazis in World War II) had turned out differently.

Practical skills can be measured by having students watch several videos of college students facing practical problems – and then solving the problems for the students in the videos, or by having students comment on how they persuaded a friend of some ideas that the friend did not initially accept.

Wisdom-based and ethical skills can be measured by problems such as what to do upon observing a student cheating, or commenting on how one could, in the future, make a positive and meaningful difference to the world, at some level.

A New Way to Test

My collaborators and I first tested our ideas between 2000 and 2005 when I was IBM professor of psychology and education and professor of management at Yale. We found (in our “Rainbow Project”) that we could double prediction of freshman-year grades over that obtained from the SAT.

We increased prediction not only of academic success, but also of extracurricular and leadership success, while greatly reducing ethnic-group differences.

Then again, when I was provost and senior vice president of Oklahoma State University (OSU), in collaboration with Kyle Wray, VP for enrollment management, we implemented a similar program at OSU (called the “Panorama Project”) that also was available to all applicants.

The measures are still being used at Tufts and at Oklahoma State. These projects have resulted in students being admitted to Tufts and OSU who never would have made it on the basis of the high school GPAs and SATs.

On our assessments, the students displayed potential that was hidden by traditional standardized tests and even by high school grades.

The Problem of Being Stuck

So why don’t colleges move on?

There are several reasons, but the most potent is sheer inertia and fear of change.

College and university presidents and admissions deans around the country have revealed to me in informal conversations that they want change but are afraid to rock the boat.

Moreover, because the SAT, unlike our assessment, is highly correlated with socioeconomic status, colleges like it. College tuition brings in big money, and anything that could affect the dollars is viewed with fear. Students who do well on standardized tests are more likely to be full-pay students, an attraction to institutions of higher learning.

What Can the US Learn From South Korea’s Testing Pressures?

As I know only too well, colleges mostly do what they did before, and changes often require approval of many different stakeholders. The effort to effect change can be daunting.

Finally, there is the problem of self-fulfilling prophecy. We use conventional standardized tests to select students. We then give those high-scoring students better opportunities not only in college but for jobs in our society.

As a result, the tests often make their predictions come true. Given my family history, I know all too well how real the problem of self-fulfilling prophecies is.