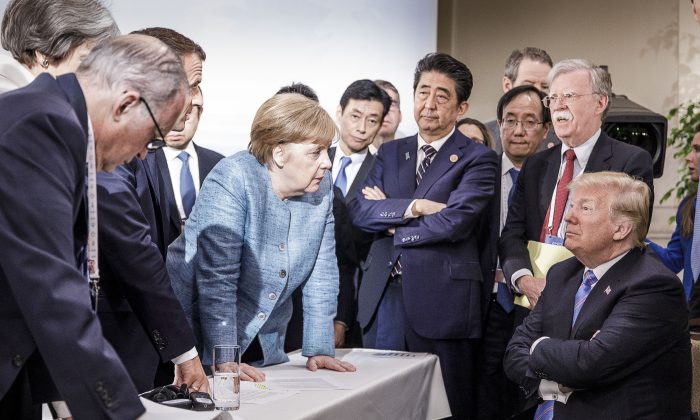 German Chancellor Angela Merkel speaks to President Donald Trump in front of other world leaders in Charlevoix, Canada, at the G-7 summit on June 9, 2018. The mainstream media and world leaders are blaming Trump for starting a trade war, where in reality all politicians are fighting to protect their special interest groups. (Jesco Denzel /Bundesregierung via Getty Images)
Viewpoints

Whose Trade War Is It Anyway?

Everybody complains about Trump, but he wasn’t the one who started it

War is aggression, often with the use of physical violence to conquer land, people, and power. Trade wars, though not quite as bad, also are aggressive in nature. Where two or more private parties want to transact freely, aggressive governments step in the way and prevent trade from happening with the threat of force.

In 2018, most of the mainstream media and the establishment powers blame President Donald Trump and his administration for starting a trade war, which—like real wars—can only produce losers on both sides. “How Much Damage Will Trump’s Trade War Do?” read a headline in The Atlantic, and countless other articles and official statements say similar things.

So the mainstream media and some politicians are pretending that trade was 100 percent free before Trump started to threaten the “free traders” of China, the European Union (EU), Mexico, and Canada with tariffs. The media paints Washington as the aggressor in this trade war. Trump shot first.

However, truth be told, this trade war did not start this year and certainly the United States isn’t the biggest aggressor. In real war terms, the Americans are now starting to shoot back after being under siege for decades and the whole world is complaining about this act of self-defense.

As Trump wrote in a tweet before meeting the EU’s Jean Claude Juncker on July 25, he doesn’t want a war, he just wants the other side to stop shelling the United States.

“The European Union is coming to Washington tomorrow to negotiate a deal on Trade. I have an idea for them. Both the U.S. and the E.U. drop all Tariffs, Barriers and Subsidies! That would finally be called Free Market and Fair Trade! Hope they do it, we are ready – but they won’t!”

When Did It Start, Who Started It?

If we take the definition of a trade war as stopping trade with force, through tariffs, duties, taxes, regulations, and restrictions on foreign investments, no government is innocent. They are all aggressors vis à vis the private sector, which would like to make win-win deals across the globe.

As economist Faustino Ballve notes in his “Essentials of Economics,” “In the market, the buyer as well as the seller gives less than he gets; otherwise no exchange would take place.” In the day and age of identity politics and rampant nationalism, it’s hard to believe that this also goes for the global market where private players don’t care much where the buyer or seller is from or how they look.

And it’s hard to keep track of which government started which tariff and kept it for how long. However, we can say for certain that with China’s ascent to the World Trade Organization (WTO), trade restrictions for Chinese goods worldwide were dramatically lowered while China was allowed to keep relatively high tariffs of around 10 percent on average.

So despite this pretty good deal, and also making some improvements, China has kept waging a trade war, restricting market access through force more than any other country involved in the current trade spats between the United States and the EU, or the United States and NAFTA. And this has been going on since 2001.

Of course, it doesn’t stop at tariffs. China has used other methods of restricting the flow of trade and putting foreigners at a disadvantage.

The Information Technology and Innovation Foundation calls this “innovation mercantilism”:

According to the latest Enabling Trade Report by the World Economic Forum (WEF) from 2016, which takes some of these measures into account, China ranks 61 out of 136 nations for its role in enabling trade. The United States ranks 22nd with weighted average tariffs at the lowest point in the nation’s history.

Of course, like a real war, “shooting back” and hitting Chinese goods with tariffs is costly. Existing supply chains will be disrupted, some American industries will be hurt, so will some consumers. Others will benefit.

It is possible that tariffs are too crude a way to restore some way of equilibrium because centrally planning trade is as difficult as centrally planning other parts of the economy. However, it can be argued that following through with threats made in trade negotiations is the only way to stay credible and get the Chinese to stop shooting eventually.

Why is the mainstream media silent on these acts of trade war committed by the Chinese government? Why doesn’t it call on the Chinese to lower tariffs to U.S. levels? President Trump certainly won’t stand in the way of that.

What About the Others?

With NAFTA and the EU, it gets more complicated as both blocks don’t wage their trade wars as fierce as China and generally, trade with the two blocks has been more equitable, although the United States has sizeable trade deficits with both the EU and Mexico.

It’s important to note here that despite all the rhetoric about unfair trade, there are domestic factors also which can cause a country to become less competitive, and the United States has itself to blame for excessive taxation and regulation, which can also be the cause for trade deficits with more competitive countries.

But despite the headline elimination of tariffs, there are still issues within NAFTA. From 1994 to 2016, there have been 35 complaints by American companies against Canada under the NAFTA dispute resolution framework, 22 against Mexico, and 20 against the United States. So again it looks like the United States is the least aggressive of the warring parties.

Although the issues are far less severe than with China, Canada and Mexico are also using force to gain an advantage in trade. Canada still has sky-high tariffs on agricultural products, for example, and subsidizes lumber companies with government resources to the detriment of American industry.

Despite the high trade deficit with Mexico, it is the most peaceful of the lot. The Trump administration sees more issues with it being used by foreign and domestic companies to manufacture cheaply in Mexico and then export duty-free to the United States, as American and German companies do with cars for example. Mexico is more of a supplier and a base rather than an aggressive war party.

Speaking about cars, the EU is the biggest aggressor, with tariffs of 10 percent on American car imports whereas EU carmakers can ship to the United States with a paltry 2.5 percent increase in prices.

And although the average tariffs are roughly similar in the EU and the United States, the EU has passed more than 250 harmful trade interventions in every year since 2009, many of which target the United States, according to World Trade Alert. A good example are hundreds of billions in agricultural subsidies and a convoluted set of rules for the standardization of products, like specific sizes for the seats of commercial truck drivers, which make it harder for foreign producers to ship to the bloc without modifications.

Let’s not pretend the U.S. trading partners are interested in real free trade. Their elected or unelected representatives are more interested in benefiting their special interest groups than in genuine free trade in goods and services among private parties.

And these representatives will intervene with force in the market, wage war against the market to achieve these objectives, in many instances more forceful and for a longer time than the United States.

And let’s not pretend that Trump has started to threaten our partners with tariffs because he is a fan of them in and of themselves. He uses them as a negotiating tool, as a threat to get the other parties to reduce their acts of aggression. Trump wants free trade—and peace. In the case of the EU, this strategy seems to have worked, although agreements to talk about and work toward lower tariffs frequently remain just that: work and talk.

And although the EU’s Juncker has made these important concessions to work towards lower tariffs excluding the sensitive auto sector, most of the other players don’t look to be interested in real free trade. Otherwise, they would have committed to Donald Trump’s offer at the G7 summit in June to drop all tariffs to zero—for everybody.