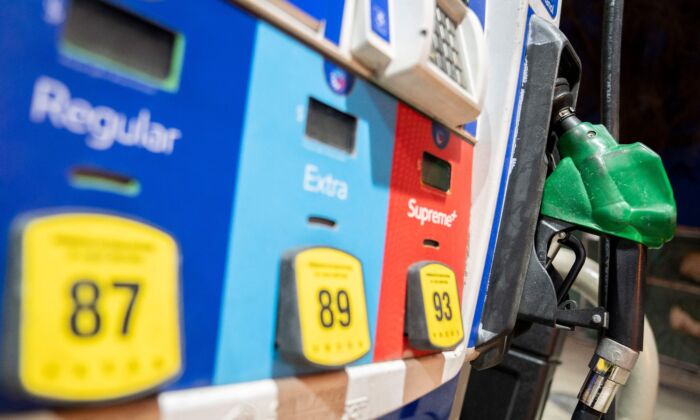 A gasoline pump sits in a holder at an Exxon gas station in Washington, D.C., on March 13, 2022. (Stefani Reynolds/AFP via Getty Images)
Policies & Impacts

The drain Americans feel from increased gasoline prices owes to policy decisions by President Joe Biden, the Russian invasion of Ukraine, and several other factors, according to several experts.

Gasoline now costs about $4.30 a gallon on average, according to GasBuddy. That’s the most expensive since the United States built up its refining capacity in the 1920s. With diesel around $5, the transportation of goods has gotten more expensive too, burdening the entire economy.

By comparison, in early 2020, before the COVID-19 pandemic hit the United States, gas was selling for about $2.50 a gallon.

A series of events led to this point.

The pandemic and the following lockdowns sent demand plummeting. Oil producers only started to cut back at the end of March, leading to a supply glut. For a moment, the WTI crude oil price index turned negative as storage filled up and holders of contracts for future deliveries had to pay to get the oil off of their hands. Gas prices dropped to about $1.75.

The picture painted by establishment media at the time was gloomy—the Trump administration was mismanaging the COVID crisis, there was no effective therapy, and promises of early vaccines were unrealistic. As it turned out, this picture failed to reflect reality, but it affected business sentiment. Industries braced for a prolonged depression and subdued demand.

The recovery, however, was much more rapid. A few months in, red states in particular started to open up their economies again (some didn’t shut it down to begin with) and vaccines were indeed delivered in the fall of 2020, giving the populace, particularly in the blue states, confidence that reopening was possible.

Shortly after President Joe Biden took office in January 2021, he issued a flurry of executive orders, setting in motion what the administration presented as a whole-of-government effort to counter climate change. A major part of that agenda is the so-called “decarbonization” of the economy, which means the gradual elimination of much of the oil industry. In tandem, major financial institutions subscribed to their own climate initiatives, promising to “decarbonize” their investment portfolios. In a show that these weren’t empty words, Biden halted the issuance of new drilling leases on federal land and nixed the Keystone pipeline, which was to bring oil from Canada.

The moves stumped investment prospects in the oil industry. What use is there in building up capacity if the infrastructure soon needs to be scrapped anyway?

For this reason, many analysts have laid blame for the gas prices at Biden’s feet.

“He’s running a jihad against fossil fuels. … And that’s the reason we’re in the fix we’re in right now,” commented Larry Kudlow, former director of the White House National Economic Council under the Trump administration, in a recent EpochTV interview.

Phil Flynn, a senior market analyst at The Price Futures Group, criticized “the shortsighted and dangerous war on fossil fuels that is backfiring on almost every level,” in a recent blog post.

The Biden administration has pointed out that U.S. oil production has been increasing. That is true. U.S. crude oil field production reached 11.6 million barrels a day in the first week of March, up from 10.9 million the year before. But that’s still well below the 13 million in March 2020. While producers can’t be expected to open the spigots again overnight, production has increased only about 6 percent over the past year. In comparison, oilers were able to ramp up production by some 16 percent in 2018 and another more than 13 percent in 2019.

In his latest move, Biden has tried to blame the price hikes on Russian President Vladimir Putin’s recent invasion of Ukraine, which indeed sent oil prices through the roof.

Putin countered that only a few percent of U.S. oil consumption has been coming from Russia. But that’s also misleading. Russia is the world’s second-largest oil producer. Its invasion of Ukraine was bound to be expected to prompt sanctions on its energy sector that would force much of the world to forgo Russian oil. Traders expecting tightening supply thus bid up prices of future delivery contracts.

Yet many have blamed the invasion on Biden too.

Kudlow noted that Putin intruded in Georgia in 2008 and annexed Crimea in 2014, both times coinciding with major oil price hikes.

“He has the money from his oil profits to do that. … When oil prices are low, you don’t hear from Putin,” he said.

Flynn, too, noted that the U.S. policy has “helped Vladimir Putin try to use his fossil fuel monopoly as a military and political weapon.”

Even without the invasion, gas prices would have been expected to keep climbing, according to George Santos, a veteran energy investment banker who previously worked at Citi Bank and Goldman Sachs.

“It accelerated things a little bit, but we would still get to these prices,” he told The Epoch Times.

Even while hindered by the feds, oil companies could have been expected to try to hike production more. Especially the big players, however, haven’t been sufficiently eager to drill up more because they enjoy the income from elevated prices, Santos suggested.

“I’m not saying it’s entirely their fault, but they also bear some responsibility,” he said.

Under normal circumstances, if oil prices go up, producers can’t just sit back and take the profit indefinitely. At some point, they need to expand production and ease the price otherwise people will cut back on consumption and the companies may eventually end up losing money. Over the past year, however, even as gasoline prices exceeded the pre-pandemic level and kept going up, gasoline sales held steady (2–5 percent below 2019 month-to-month). Only after the extreme hike following the Ukraine invasion, “oil may have hit a level that is moderating demand,” Flynn said.

The fact that it took oil price spiking above $120 for the oil to maybe hit a level that causes people to cut back on consumption is related to the enormous money printing by the Federal Reserve in response to the trillions in government spending authorized by Congress, according to Mark Thornton, economist at the Mises Institute, a classical liberal think-tank.

“I would say that there are enough Americans ready, willing, and able to buy stuff, that everything is going up in price,” he told The Epoch Times via email. “Capacity is very thin everywhere, grocery stores, gas stations, nail salons, vacations, land, real estate, commodities of all sorts.”

Kudlow and others have recommended to Biden an immediate policy change to encourage more oil production.

“If you call the dogs off, you get yourself back to 13.5 or 14 million barrels a day, my opinion, in six months. And the futures market will start to reflect that so the price will come down. And that takes money out of Putin’s pocket.”

Update: The article was updated with a comment from Mark Thornton, economist at the Mises Institute.