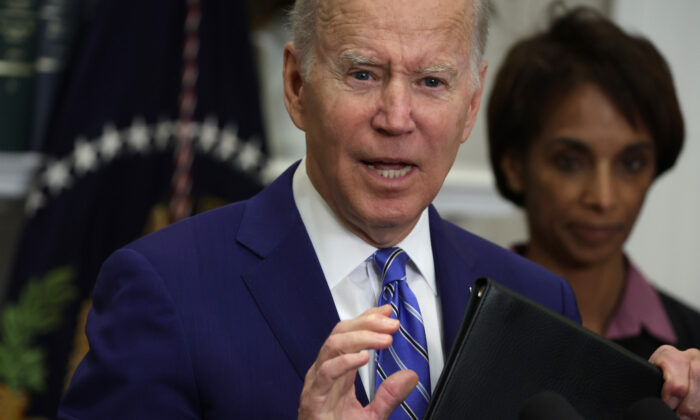 U.S. President Joe Biden speaks as Assistant to the President & Chair of the Council of Economic Advisers Cecilia Rouse listens during an event at the Roosevelt Room of the White House May 4, 2022 in Washington, D.C. (Alex Wong/Getty Images)
Viewpoints

Who’s the Biggest Spender of Them All?

Did you know that President Joe Biden is a fiscal hawk who is doing everything he can to reduce our $30 trillion debt and our $1 trillion to $2 trillion in annual borrowing? It must be true—because he says so.

And if you believe any of this, you probably believe he’s “doing everything he can to bring gas prices down.”

Someone in the White House thinks we are so stupid that we believe these claims.

His claim to be a deficit slayer is a real hoot. Twice in the past two weeks, he said he’s bringing the deficit down by half from the Trump years.

It’s true that Trump—despite his wise and productive economic policies—was no fan of cutting government spending, but when Biden says he’s “paid down the debt” last quarter and is cutting the deficit, he conveniently neglects to mention that federal spending soared in the COVID year of 2020, when the economy was shut down.

Now, COVID is all but over. We should be running surpluses now that the crisis is over.

Biden has done the opposite. Last year, he ADDED $3 trillion of new debt spending. That number would have been $5 trillion more, except that Republicans and Sen. Joe Manchin, the Democrat from West Virginia, blocked that bill, which would have super-soaked the economy with more red ink.

The deficit was $2 trillion in Biden’s first year in office and will reach another $1 trillion this year. Those are two of the largest deficits in American history.

How is this a record to brag about?

The deficit is all because of the Biden spending blowout. Tax revenues are currently at a record high.

Biden also failed to mention he wants to borrow ANOTHER $1.5 trillion to “forgive” student loan debt and asked Congress for $30 billion more for Ukraine.

If you’re confused as to how spending and borrowing MORE money will reduce the deficit, you should be. It was Biden’s billions last year that created the inflation crisis in the first place. But in this White House, there is always an excuse to expand government.

Other than that, this president is a real skinflint.

Stephen Moore is a senior fellow at the Heritage Foundation and an economist with Freedomworks. His latest book is “Govzilla: How the Relentless Growth of Government Is Devouring Our Economy.”