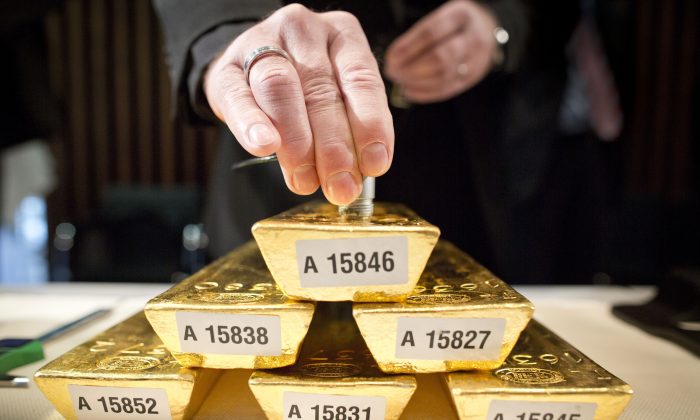 There’s one thing not open for debate: Gold is up 20 percent this year, only silver and soy did better. What is debatable and also debated across the financial spectrum is where it is going to be in the future.

Investment bank Goldman Sachs thinks gold is headed lower, to $1200 per ounce in three months’ time (now it’s trading at $1272), but has been repeatedly wrong with its predictions and had to increase its price target in incremental steps from $1000 to $1200 while gold logged its best quarter in 30 years.

Why will gold go lower, according to the investment bank with gold in its name?

“There are reasons to believe that the risk off environment which contributed to gold’s outperformance at the beginning of this year is less likely to repeat in the near future as confidence in Chinese growth, Chinese currency stability, and the potential for a collapse in oil prices is much reduced.”

Together with the belief the Federal Reserve will not rush to increase rates much further this year, Goldman thinks the world will be fine and buying gold because investors are afraid of a collapse in the economy and stock market won’t be necessary.

This view differs starkly from hedge fund manager Stanley Druckenmiller, who has averaged returns of 30 percent for his Duquesne Capital Management since 1981.

“What was the one asset you did not want to own when I started Duquesne in 1981? Hint … It has traded for 5000 years and for the first time has a positive carry in many parts of the globe as bankers are now experimenting with the absurd notion of negative interest rates. Some regard it as a metal, we regard it as a currency and it remains our largest currency allocation,” he said at the 2016 SOHN Conference.

He thinks that equities are expensive and the stock market is at a turning point. He also believes the economy is struggling under too much debt which has been wasted on unproductive investments.

“Growth in operating cash flow peaked five years ago and turned negative year over year recently even as net debt continues to grow at an incredibly high pace. Never in the post-World War II period has this happened.’

Another different between Goldman and Druckenmiller: He did not put out a price target.

Paul Singer of Elliott Management is another hedge fund manager who likes gold. “We believe the March quarter’s price action could represent something closer to the beginning of such a move than to the end,” he wrote in a letter to investors in his $28 billion fund.

Both Singer and Druckenmiller have argued in the past that gold is an alternative to overbought and low-yielding bonds as well as overbought and expensive stocks, something most investment banks like Goldman Sachs do not subscribe to.

Singer also doesn’t give a price target, but most independent analysts think gold could go a lot higher. In his book “The New Case for Gold,” Jim Rickards thinks $10,000 is a reasonable price target, it’s only a question of when.