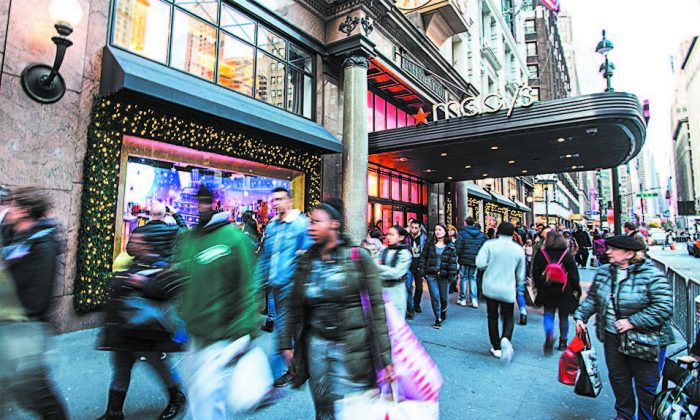 Who’s Responsible for the Booming Economy?

GDP is up 3 percent in the third quarter, the S&P 500 is up 15 percent this year, and unemployment is at lows not seen since the early 2000s. The scene is set for supporters of both political parties, and the current and former presidents, to come out and claim it was their man who did it.

President Donald Trump often tweets about the stock market and takes credit for its decent performance. On the other hand, Obama supporters claim Trump is merely reaping the benefits of the previous administration’s policies. Both camps are missing the bigger picture.

Although Trump managed a successful business with thousands of employees, it wasn’t his business that hired more than 1 million non-farm workers this year. It wasn’t the government as a whole either, as the number of people employed by federal, state, and local governments is roughly flat in 2017.

Even less did President Barack Obama hire the 17.4 million non-farm workers since March 2010—after all, he never ran a business—and although he boosted employment in federal civilian agencies, the total number of government workers stayed flat during his tenure as well.

Instead, it was private companies like UPS, Macy’s, and United Health Group that each added more than 20,000 jobs in 2016, and the millions of small businesses with fewer than 500 workers that were responsible for hiring more employees.

The same goes for GDP growth and stock market performance: It’s the private sector that is largely responsible, especially because direct government spending as a share of GDP has been declining since an emergency spike in 2009.

Presidents don’t hire; they don’t produce; they don’t sell. However, government involvement in the private economy, either through wealth redistribution, direct spending, or regulation, is still substantial and affects the way individuals can pursue their economic goals.

In the grand scheme of managing the economy, it is important to note that the office of the president is a relatively weak one, although it gets most of the media attention. With a Republican-controlled Congress, Obama managed to accomplish few of his stated objectives, except for the passing of the Affordable Care Act when the Democrats still had a majority, as well as the never fully implemented Dodd-Frank bill.

Despite having a small majority in Congress, Trump so far has been unable to get the consensus he needs for major initiatives like tax reform and the repeal of the Affordable Care Act.

“[The president], after all, will only be the president and his unilateral powers will be limited. For most of the things he wants to do, he needs Congress to go along,” writes George Friedman of research firm Geopolitical Futures.

However, although Trump is still waiting for a major legislative victory, with the tax reform coming close, business and consumer sentiment have been on a tear since his election. Leading business purchasing manager indices, as well as consumer confidence, are at cycle highs, in part because Trump promised to implement pro-growth policies like tax cuts as well as deregulation.

The deregulation agenda and the promised reforms are pro-growth and have therefore boosted business sentiment.

Both initiatives would reduce government influence in the economy and give more power and resources to the individuals von Mises talked about. And who would not be happy about having more resources and freedom?

In using one of the few unilateral powers of the presidency, Trump signed an executive order in January requiring federal agencies to repeal two regulations for every proposed new one. The White House also scrapped more than 800 proposed regulations put forward by the outgoing Obama administration.

In the face of the delayed promised tax cuts, hedge fund manager Mark Hart of Corriente Advisors thinks deregulation is the crucial factor responsible for business optimism under Trump.

“It arguably wasn’t really Trump’s legislative agenda that excited the market. I think it was more his focus on deregulation,” he told RealVisionTV. “The executive branch has more power and control over the bureaucracies than they do about enacting legislation. So he can affect change through deregulation through changing who controls bureaucracies. And it’s estimated between $1.7 trillion and $1.8 trillion a year [are lost] because of regulations.”

For example, financial stocks skyrocketed after a repeal of Dodd-Frank became even a small possibility after Trump’s election.

But many of Trump’s other policies, whether executive or legislative, have not been implemented, so it’s hard for him to take full credit for added production in the form of GDP or higher company earnings now when any policy has a lagging effect on the economy.

However, the deregulation agenda and the promised reforms are pro-growth and have therefore boosted business sentiment, which is reflected in a rising stock market and higher activity as people and companies feel their investment now will be rewarded in the future after the policies take effect.

Obama’s government spending programs and regulation, as well as the Affordable Care Act, were not pro-growth, supply-side policies by any measure, and it’s hard to find evidence they had a lasting positive impact on the economy that would only come into play after he left office.

Certainly, despite the failure of signature programs like Solyndra, the stimulus measures early in his first term stopped the economy from crashing after the financial crisis of 2008. But as with all government intervention in the marketplace, this one came at a price of years of sluggish growth, $9 trillion in additional government debt, and lackluster business and consumer confidence. When all is said and done, Obama is the only president who never had a single year of above 3 percent GDP growth.

Aside from private actors, federal legislation, and executive orders, there are other major factors influencing the economy. One is the Federal Reserve. By controlling money and credit through the banking system, it exerts control over the economy, which individuals cannot escape.

Together with the financial institutions that control it, it was mainly responsible for causing the subprime crisis that affected even healthy sectors of the economy. It then ensured the bailout of the financial sector and the economy by handing out trillions in loans and guarantees to financial companies, and by buying a big chunk of the government debt the Obama Treasury issued with help from a Republican-controlled Congress.

It greased the wheel of private business and encouraged risk-taking by private actors who knew the Fed would come to their rescue should there be another crisis. And even during the first year of the Trump administration and supposedly into a rate-hiking cycle, it delayed interest rate increases longer than anticipated; the financial conditions index by the Federal Reserve Bank of Chicago remains in record loose territory.

Especially for the stock market, this easy money policy is the main factor that lifted the S&P 500 from a crash low of 666 in March 2009 to 2,578 in November 2017 as valuation metrics expanded and earnings stagnated, especially during the middle of the Obama presidency.

However, by keeping bad debts, encouraging government and financial waste, and letting bad players off the hook, the Fed is also partly responsible for the sluggish growth under Obama, because it prevented the market from ridding itself of bad debt and bad companies and starting off fresh.

And as for the positive results under Trump, it may well be that we are now seeing the high of the latest Fed-controlled boom-bust cycle, with the bust to follow soon after. Just don’t blame Trump for it when it comes.

Another external factor, which is often ignored but played a major role in the recovery after the financial crisis, was China’s decision to spend trillions to stimulate its economy, increasing demand for exports of raw materials and technology into China from much of the developed world.

We like to say a president causes the economy to boom. But in a relatively free and globally interconnected economy, no single person can be responsible for everything. Instead, it is the actions of millions of different people who make or break the economy—and our well-being.