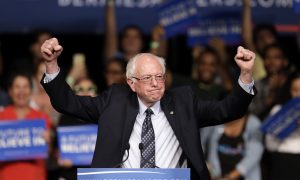 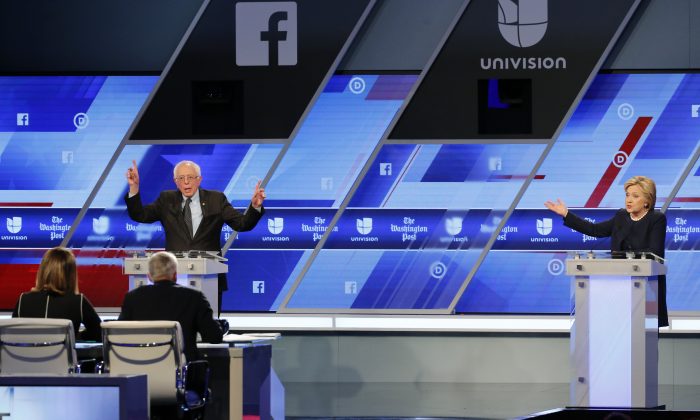 MIAMI— Fighting for Florida and beyond, Hillary Clinton and Bernie Sanders tangled in an intense debate over who’s the true friend of American Hispanics, trading accusations over guest worker programs “akin to slavery” and the embracing of “vigilantes” against immigrants.

They had even worse things to say about Republican front-runner Donald Trump.

Facing off Thursday evening, just six days before Florida gives its verdict on the presidential race, Clinton faulted Sanders for repeatedly voting against a 2007 comprehensive immigration reform bill; he faulted her for opposing a 2007 effort to let people who were in the country illegally obtain driver’s licenses.

Had the immigration package passed back then, Clinton said, “a lot of the issues we are still discussing today would be in the rearview mirror.”

Sanders retorted that he opposed the legislation because it included a guest worker program “akin to slavery.”

The debate opened with a question that appeared to startle Clinton.

Univision’s Jorge Ramos asked her if she would drop out of the race if indicted over the handling of her email while secretary of state.

“Oh for goodness, that is not going to happen,” Clinton declared. “I’m not even answering that question.”

The FBI is investigating the possibility that Clinton mishandled sensitive information that passed through her private email server.

Sanders, as he has in the past, declined to bite on the issue, saying, “The process will take its course.” He said he’d rather talk about the issues of wealth and income inequality.

Both candidates were bidding for momentum after Sanders surprised Clinton with an upset victory in Michigan on Tuesday.

Clinton stressed that she has a strong lead in the delegates, declaring, “This is a marathon, and it is a marathon that can only be carried by the kind of campaign I am running.”

Sanders said his Michigan surprise was evidence that his message is resonating.

“We are going to continue to do extremely well,” he said, adding that he expects to convince superdelegates who are backing Clinton to switch to his column.

Immigration commanded considerable attention for good reason: Florida is home to nearly 1.8 million Hispanics, including about 15 percent of the state’s Democrats.

Hispanic voters have made up about 10 percent of voters in the Democratic primaries so far this year, and Clinton has been getting about two-thirds of their votes to about one-third for Sanders. The Vermont senator stresses that he’s making progress on winning over younger Hispanics.

Clinton at one point accused Sanders of supporting legislation that would have led to indefinite detention of people facing deportation, and for standing with Minutemen vigilantes. He called that notion “ridiculous” and “absurd,” and accused Clinton of picking small pieces out of big legislative packages to distort his voting record.

“No, I do not support vigilantes and that is a horrific statement and an unfair statement to make,” he said.

For all the disagreements, the overall tone of the candidates was considerably less tense than their Sunday faceoff. Sanders even paused at one point to make fun of his own pronunciation of “huge” as “yuge.”

Both found agreement in pointing to GOP front-runner Trump as markedly worse on immigration than either of them.

Clinton mocked Trump’s plan for a wall on the Mexican border, saying he’d build “the most beautiful tall wall, better than the great wall of China” to be “magically” paid for by Mexico. That, she said, is a fantasy.

Sanders said that in the immigration debate “we do not, as Donald Trump and others have done, resort to racism and xenophobia and bigotry.”

There were any number of areas of agreement, including the need to reduce student loan debt. Sanders said he’d come up with a plan “many months before she did.”

“Thanks for copying a very good idea,” he said.

The candidates squared off soon after a testy debate in Michigan on Sunday in which they argued about trade and economic issues of particular interest in the industrial Midwest.

With Missouri, Illinois and Ohio among the states that will be voting on Tuesday, the candidates returned to a pointed matter they’d already argued about three days earlier, scuffling over Sanders’ vote against 2009 legislation that bailed out the auto industry, among others. Sanders said he opposed the bill because it also bailed out big banks that had fueled the recession to begin with. Clinton stressed she’d made a different judgment to side with the automakers.

Overall, 691 delegates are at stake on Tuesday, including 99 in Florida, which awards its delegates proportionally.

Clinton has won 762 pledged delegates compared to 549 for Sanders, with 10 delegates from recent primaries still to be allocated. When superdelegates are included, Clinton leads 1,223 to 574, more than halfway to the 2,383 needed to win the Democratic nomination.