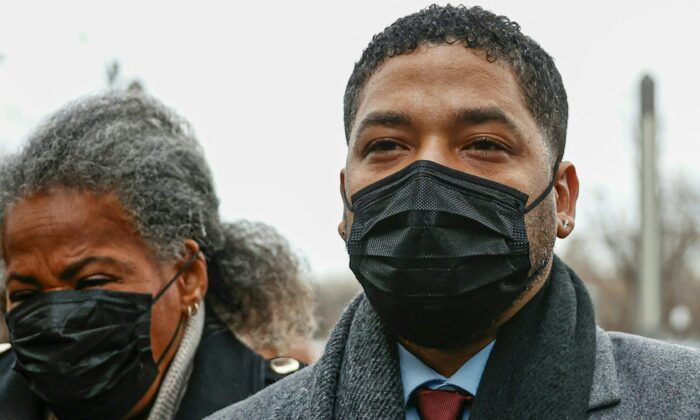 Jussie Smollett arrives with his mother, Janet Smollett (L), at the Leighton Criminal Court Building for his trial on disorderly conduct charges in Chicago on Dec. 6 2021. (Kamil Krzacynski/AFP via Getty Images)
Viewpoints

Who’re You Gonna Believe? Not the Media

The recent revelations arising from the Durham probe into the origins of the Russiagate scandal have made it clearer than ever that, when the media fought back against Donald Trump’s charge that they had become the purveyors of “fake news,” they did so at the cost of having proved him right.

Not that you would know that, if, for some unfathomable reason, you continue to rely on the media themselves for your information. Though The Washington Post has gone back and corrected some details (and omitted some others) in the hundreds of Russiagate stories it ran between 2017 and 2020, it has apologized for or retracted none of them. Nor has any other mainstream media outlet known to me.

There may be a reason for this, apart from simple embarrassment. In fact, they don’t appear even to be embarrassed by such a serious mistake—which suggests that it wasn’t really a mistake at all but a deliberate deception from the start.

One thing we can know for sure is that the era of unacknowledged fake news in which we live depends on the media’s indulgence of, if not its sharing in, the increasingly popular superstition that mere reality cannot intrude upon the right of everyone—at least of everyone in favor with the media—to his or her own idea of what’s true and what’s not.

The week of Dec. 6 brought another reminder of this indulgence with the trial of Jussie Smollett in Chicago on six counts of disorderly conduct for staging his own kidnapping by MAGA-hatted “Trump supporters” in January 2019.

Almost as soon as it happened, it became clear that the alleged racist attack was fake news and that Smollett had paid Abimbola and Olabinjo Osundairo, two Nigerian brothers with whom he was acquainted, $3,500 to masquerade as the left’s idea of Trump supporters, crying “this is MAGA country” as they allegedly attacked him with bleach, a noose, and homophobic and racist slurs.

The ludicrousness of describing Chicago as “MAGA country” should have been a tip-off if nothing else was, but Chicago’s state’s attorney Kim Foxx declined to prosecute the authors of the imposture, and a special prosecutor had to be brought into the case in order for Smollett to be charged, as now he has been.

Not altogether surprisingly, he is no more embarrassed at being caught out than the media have been by the fake news of Russiagate. Like them, he claims the privilege of being the ultimate arbiter of his own truth by sticking to his story, even under oath on the witness stand, no matter how absurd it may appear to anyone else, or to the law.

The great thing about fake news for those who have found it useful as a political weapon is that it never really goes away or becomes discredited by mere fact or more accurate information. It will live forever, preserved in amber in the eternal present of the internet. That’s why it seems appropriate that Black Lives Matter remains firmly in Smollett’s corner, as that movement’s origins—not only never disavowed but continually repeated to this day—lie in the fake news story of Michael Brown having been shot in the back in August 2014 after crying, “Hands up, don’t shoot.”

As examples of never-corrected fake news in the media continue to multiply, more and more people may be expected to pick and choose from the media smorgasbord only that which they want or need to believe, rather than what’s objectively true, something which they have come to believe is unknowable.

That can be the only explanation for something like Rep. Alexandria Ocasio-Cortez’s declining to believe that the widespread looting in broad daylight of retail merchants in California and elsewhere is really happening.

“I believe it’s a Walgreens in California cited it,” she is reported to have said, “but the data didn’t back it up.”

Poor AOC! The data are never going to back up anything she prefers not to believe. The only data that count for her are those that back up her own prejudices.

And she can always get such data from the same supplier used by Dana Milbank of The Washington Post—the man who recently announced on that paper’s op-ed page and in defiance of the universal opinion of mankind that he had “proof” that “the media treats Biden as badly as—or worse than—Trump.”

This extraordinary claim inevitably brought to mind President Joe Biden’s claim in August that the American withdrawal from Afghanistan had been an “extraordinary success.” Sure Dana, sure Joe, you can believe that if you want to.

The president and Ocasio-Cortez are hardly alone among politicians in claiming for themselves the media’s self-bestowed right to ignore reality in favor of their own political narrative. Thus Stacy Abrams has lately announced that she “did not challenge” the election she lost to Brian Kemp as governor of Georgia in 2018—an election in which she gained national prominence for challenging.

The craze for using the American media as a vehicle for proclaiming as true the most undoubted falsehoods (or as false the most undoubted truths) has even spread internationally—or so it would seem, from The New York Times’ report on Dec. 8 that “Ahead of Biden’s Democracy Summit, China Says: We’re Also a Democracy.”

To its credit, the NY Times’ reporters on the story, Keith Bradsher and Steven Lee Myers, express a degree of skepticism about this, calling it an “improbable claim,” though they go on to write that it may carry weight “in some countries disillusioned by liberal democracy or by American-led criticism … including in China itself.”

There, I think, they are mistaken, possibly even honestly so. For China is the one place on earth where the government’s claim to be a democracy is least likely to be believed. That’s because the people there have grown so used to being lied to by government and media that they can no longer believe a word they say, if they ever could.

At this rate, it won’t be long before the American people find themselves in the same position—but by then it will be too late to do anything about it.