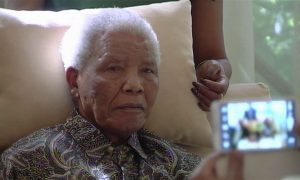 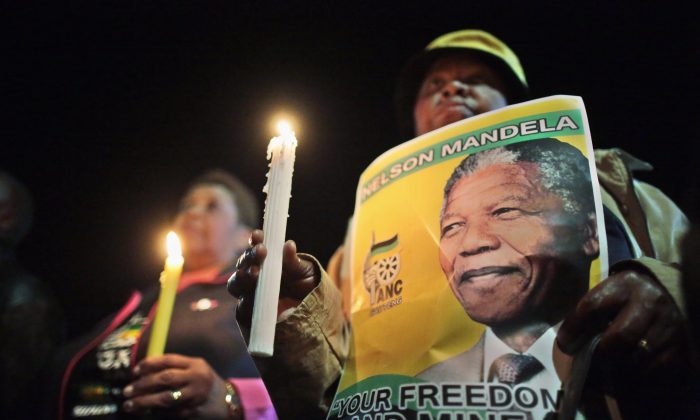 Whole World Is Crying Out For Nelson Mandela

The clock is ticking for Nelson Mandela’s life.  The latest news is not good. His condition is now said to be critical. The intensive care doctors have downgraded their “stable but serious” diagnosis. Members of his family may have paid their final visits this past weekend.

The 94-year old former political activist turned prisoner turned President is suffering from the infirmities of his age and a lung condition he contracted in prison that weakened his system. He has defied the odds in living as long has he has, but no one lives forever.

His voice is still, but it seems like the whole world is crying out for him. A well-known Southern African singer told me that on a recent visit to Spain, she was asked repeatedly how he is doing. There’s no doubt that the “Madiba magic” that moved South Africa also touched the world, a world that supported his country’s fight for freedom.

He has said what he had to say and done what he had to do. His legacy is secure, in part, because of the integrity and sacrifice he was known for. He transcended the limits of race and showed the world that a righteous and well-organized popular movement could not be denied.

The movement he helped build had four spokes—mass organizing in the townships, an army of trained guerilla fighters based outside the country, diplomatic initiatives at the UN and a grass roots international solidarity campaign. “The Free Mandela” activism inspired economic sanctions, as well as bank and cultural boycotts to pressure the apartheid regime and its many supporters overseas.

Many in South Africa are ready to let him go, but some in the white community who never supported him now fear a wave of retaliation and recrimination from a people, who in their majority, live a life of economic apartheid with all too many still jobless and poor.

The scenarios of imminent doom may only play with a fringe minority, while other journalists debate and discuss life after Mandela. AlJazeera reports the media is on a deathwatch.

“Local and international journalists spent the day outside the two entrances to the Pretoria hospital where Mandela was believed to be. Security guards had been posted at the entrances. More than 10 broadcast vans were there. Some journalists had erected small tents and others had generators. Passers-by stopped to ask about Mandela.”

But as all the attention is on the man and his condition, what else needs saying about what he couldn’t accomplish in part because of pressure from the wealthy elite that still controls the country’s economy? Mandela triumphed politically, but economically he was obviously constrained by powerful self-interested forces.

Mandela has already confessed to some of his personal flaws and has always said he was not a saint or a savior,

South Africa’s Daily Maverick columnist Justin McCarthy spoke to hopes that had not been met.

“Anyone who believes Madiba to be flawless and above reproach is naïve in the extreme. Every leader is forced to compromise at some point – tough decisions have to be made that may conflict with one’s own ideals, but serve those of the collective body one represents.  These ideological clashes are common, but it doesn’t necessarily mean that one betrays one’s integrity. It is precisely this acute integrity that Madiba displayed on each occasion he was called upon to take tough positions. … In simple terms, he walked the walk.”

Yes, he did walk that walk—and a very long walk it was as he describes in his own “Long Walk To Freedom”—but along the way, he seemed better at coping with his very public enemies among the Afrikaner supremacists than the economic guardians who ruled the country from the shadows and played a much more seductive game.

Ronnie Kasrils who fought in the underground under Mandela’s command, and went on to become the Minister of Intelligence, has just written a new introduction to his autobiography Armed and Dangerous.

He raises questions about Mandela’s role in endorsing conservative neo-liberal economic policies that made it impossible for his government to honor its pledge to end poverty.

“History will judge whether we lost a golden opportunity to press on then rather than make the concessions we did regarding economic control, “he writes.

“It has become a debatable issue whether Mandela and his economic advisers buckled under pressure from the IMF and corporate business to follow a ‘prudent’ economic course…I do not want to be self-serving here. I was as guilty as others in focusing on my own responsibilities and government portfolios and leaving the economic issues to the ANC experts.”

This mea-culpa and the questions it poses are likely to be buried in the outpouring of grieving and tributes that will follow the death of the man who everyone calls Madiba, his clan name, or “Tata” (father).

He was the father of South Africa’s democracy and a visionary freedom fighter who knew how to inspire supporters and enemies alike. He has been the symbolic glue that has kept his country together, at least in the eyes of the world, even as economic pain and corruption disillusions many of his most fervent supporters.

The South Africa Mandela envisioned and fought for dramatically changed the environment, taking the edge off the race war that threatened for so many years, and while not transforming all the structural inequities, it did lead to a democratic government with constitution, perhaps the most advanced in the world that defends human rights.

As a leader, Mandela took on unpopular causes, became a global advocate for AIDS sufferers and spoke out for nuclear disarmament and against the Iraq War. His moral appeal may have been stronger than his ability to achieve all of his political goals. He was honored by almost every nation in the world for his integrity and willingness to express his beliefs.

He now clearly seems to belong to another era. Unlike President Obama who is facing bitter disenchantment and criticism from his onetime most enthusiastic backers, there has been no similar backlash against Mandela.

His legacy as a liberator is assured—not just as a celebrity who is famous for being famous. Mandela himself frequently asked that he not be regarded as a saint or a savior. He confessed to his flaws, including male chauvinism and not spending enough time with his family. A lifelong believer in “collective leadership,” he credits his comrades and his movement for the successes he had.

The world protested for Mandela but public opinion on the leader who claims to be inspired by him has turned. Barack Obama who has been compared by some to the South African leader is expected to be the target of widespread protests during his visit to South Africa.

On his first trip, he visited Robben Island, the prison in which he was incarcerated for 18 years as a “terrorist.” Obama went away pledging to close Guantanamo, the closest thing we have to it. He has yet to do it.

If there is a funeral, he is sure to be there, right up front, but without the track record or loving respect that Mandela enjoyed.  They may share a pigment but not a political vision.

Some years ago, I covered Mandela’s visit to the White House on his last visit to the U.S. for one of the seven documentaries I made about his life—what a privilege.  Bill Clinton brought the house down when he said, with a tear in his eye, “We would all like to be Nelson Mandela on our best day.”

News Dissector, Danny Schechter been documenting the making and meaning of a major Mandela biopic, Mandela: Long Walk To Freedom, set for release in November. He edits Mediachannel.org and blogs at NewsDissector.net. Comments to: dissector@mediachannel.org