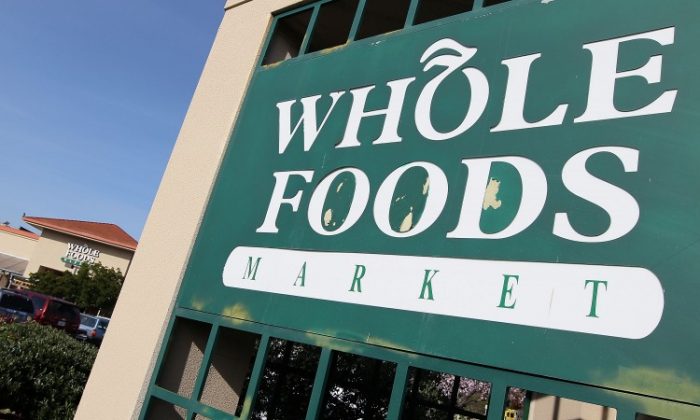 NEW YORK—John Mackey, the CEO of upmarket grocery chain Whole Foods Market, called for a renaissance of true free-market capitalism at an event on Jan. 17. He spoke about the need to reduce regulation and improve business ethics.

“We believe that business is good because it creates value,” says the credo of John Mackey’s new book “Conscious Capitalism,” which he spoke about at an event hosted by the 92Y in New York on Jan. 17.

The goal of his book, according to Mackey, is to provide a fresh perspective on business and dust off the stereotypically dirty reputation of doing business. “Business is often judged by the worst practitioners,” he says, naming the now-defunct Enron Corp. as an example. He says that free-market capitalism has indeed dramatically improved the standard of living for average citizens, starting in the early 19th century.

This passionate defense of free market capitalism comes from a man who surprisingly describes himself as a progressive and who grew up in liberal surroundings. He completely changed his perspective on business and capitalism after starting his own business in Austin, Texas in 1978.

The small natural foods store called SaferWay later evolved into what Whole Foods Market is today, a company with a market capitalization of almost $17 billion. During his journey, Mackey found that the concepts he had formed about greedy businesses did not fit the reality of running his store.

He started to perceive commerce to be about “voluntary exchange” rather than greed and began reading the works of Austrian-school economists such as Ludwig von Mises and Friedrich Hayek to broaden his understanding. And while he still sees himself as a liberal on many ethical issues, he became a staunch supporter of the free market with respect to economic philosophy. “I’m a capitalist,” he says, plain and simple.

Yet, the 59-year old Texan who was named “Entrepreneur of the Year” by Ernst & Young in 2003 would not be so convincing if he wasn’t able to contrast the current economic set-up versus his ideal form of free market capitalism.

“Business is fundamentally good,” he says, but immediately cautions that “it could be so much better.”

The first area of improvement, according to him, is reducing “crony capitalism” and government intervention. “We are not in a perfect free enterprise system,” he says pointing out that “well connected” sectors or companies continually benefit from government policies while the majority of businesses benefit less or even lose out.

As an example, he names bank bailouts in the wake of the 2008 financial crisis as an act that failed to punish those who “gambled.” More recently, the alternative energy sector and the Hollywood film and media industry received some “goodies” in the fiscal cliff deal passed in the beginning of the year, he said.

As an example of too much regulation, he cites the Obama Care healthcare reform. “We already had a highly regulated… healthcare system, we have ratcheted the dial up a few notches.”

According to him, this misconception of what is free market economics has “undermined people’s trust in the system.”

The second improvement needs to come from businesses themselves—the need to transcend thinking only about profits and start taking care of all stakeholders.

“I don’t think shareholders should come first,” he says, labeling it a “bad business strategy.” According to Mackey, focus on employees should go hand-in-hand with a focus on customer service. Happy employees will make customers happy by creating value, not cash-flow.

“If you put shareholders first, you won’t get there,” he says, adding that “profits come as a by-product of creating value.”

Part of Whole Foods’ strategy to make employees happy is a transparent and fair compensation structure. Whole Foods’ directors can earn a maximum of 19 times what their average employee makes, which is at the very low end of Fortune 500 companies.

As a contrast, Stephen Hemsley of UnitedHealth group made 1,737 times its average salary in 2012, according to research by Payscale. Whole Foods’ directors still earn more than $800,000 per year, have mostly risen through the ranks, and Mackey says that the company never lost any managers. Mackey himself works for a symbolic $1 per year.

In addition, Whole Foods grants stock options for all employees and 93 percent are issued to employees outside of upper management.

On a more philosophical level, Mackey sees the need for businesses to adopt “higher purpose” strategies, such as Whole Foods’ emphasis on natural and organic food as well as educating customers about healthy nutrition.

“Secular society’s ethics eroded over time,” he says, emphasizing the need for businesses to adopt new values that take all stakeholders and the broader society into account.

Alas, adopting a higher purpose and putting employees and customers first has not done shareholders any damage for Whole Foods.

“We are a very mission-driven, higher purpose company,” says Mackey who oversaw the setting up of two charitable organizations, with a third planned. In total, Whole Foods can afford internal rules that stipulate donating at least 5 percent of net-profit to charity every year.

He managed to set an inspiring example with Whole Foods, but Mackey has even higher hopes. As awareness of true free market capitalism grows and business ethics improve, he hopes that through this transformation, poverty can be wiped out within the next 50 years.