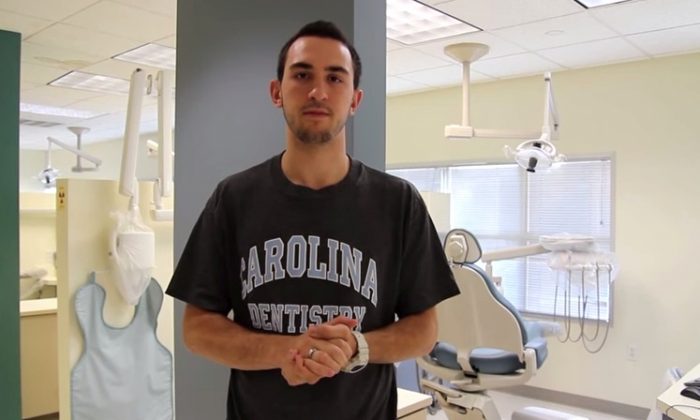 Deah Shaddy Barakat, 23, appears in a YouTube video to promote his online fundraising campaign for bringing dental care and supplies to Syrian refugees in Turkey. Barakat was shot and killed, along with his wife and sister-in-law Tuesday evening in their apartment in Chapel Hill, N.C. (Screenshot/YouTube/Project: Refugee Smiles)
Crime and Incidents

Deah Shaddy Barakat was a person who led by example, who exemplified the saying that actions should speak louder than words, according to those who knew him.

A devout follower of the Muslim faith, Barakat inspired others around him to do good for the sake of others.

A second-year student at the University of North Carolina (UNC) School of Dentistry, Barakat recently started a fundraising campaign for a group of students and faculty to travel to Turkey and provide dental care to Syrian refugees fleeing the civil war. A post on his Facebook page reveals he gave out food and dental supplies to the homeless in downtown Durham County two weeks ago.

“He taught us about how impactful we have to be in our lives here and in afterlife,” said Usman Rahim, 20, a friend of Barakat.

He was a role model on and off the [basketball] court.
— Hassan Rahim, friend of Chapel Hill shooting victim, Deah Barakat

Barakat, 23, along with his wife Yusor Abu-Salha, 21, and his wife’s sister Razan Abu-Salha, 19, were shot and killed by a neighbor in their apartment near the UNC campus in Chapel Hill, North Carolina Tuesday evening. Their deaths have left family and friends in shock.

Usman and his brother Hassan Rahim remember Barakat as a humble, hard-working, brother-like figure they looked up to. “The way he handled everything, and cared for his family, the way he treated his friends, even someone he just met once—he treated as one of the closest people he met,” Hassan, 22, said.

Hassan and his circle of mutual friends turn to Barakat for advice on everything, from family and relationship problems, to what to pursue as a future career. And Barakat would always lend an ear.

Hassan recalls speaking with Barakat for the last time seeking his advice. “The last text I sent to him, I said, ‘thank you for being such a great brother, and someone who’s always been there for me.'”

He first met Barakat five years ago when playing together at basketball tournaments organized by the local Islamic association in Raleigh. They were both big aficionados of the sport. Barakat was a die-hard fan of North Carolina State University’s basketball team, where Barakat attended undergraduate studies. He was also captain of the Islamic association basketball team, called the Splash Brothers. The team frequently plays at local tournaments and is a tight-knit group.

“He was a role model on and off the court,” said Hassan.

Barakat was well-liked, active in the Muslim community in Raleigh and nearby towns. During Ramadan, his family supplied the meal for everyone at the local mosque to break fast. He helped organize several basketball tournaments for the Islamic association.

Both brothers also remember Barakat’s influence on helping them better understand their faith. “After meeting Deah, I realized there’s more to Islam than just praying five times a day. It’s about being a good person, and helping others,” said Hassan, a senior studying at UNC Charlotte.

Usman also saw Barakat’s good character as a reflection of his devotion to the Muslim faith.

“Growing up, I can say I was ignorant and arrogant. Meeting someone like Deah really opened my eyes,” Usman said, a sophomore at UNC Chapel Hill. “He never bad-mouthed anybody. I never saw him harm anyone.”

Barakat taught Usman that life was “not about you. It’s about how you impact others.”

On Wednesday, friends and sympathizers also took to social media with an outpouring of condolences and messages of support. A Facebook group called “Our Three Winners” commemorating the three victims and created Tuesday evening had over 62,000 likes at the time of writing.

Local police said in a statement Wednesday morning that an initial investigation suggested the shooter, Craig Stephen Hicks, was motivated by a dispute over their parking spots, according to reports by local press.

But the father of Barakat’s wife, Mohammad Abu-Salha, told local press that he believed the shooting was a hate crime. Abu-Salha said his daughter, who wears a Muslim head scarf, had previously told him of a “hateful neighbor” who picked on her and her husband.

The Muslim civil rights organization, Council on American-Islamic Relations (CAIR), called on local police to investigate whether the shooting could be motivated by anti-Muslim sentiment in a statement released Wednesday.

He taught us about how impactful we have to be in our lives here and in afterlife.
— Usman Rahim, friend of Barakat

The organization pointed to Hicks’s expression of anti-religious and atheist feelings on his Facebook page, as well as the brutal nature of the victims’ deaths. They were all shot in the head.

Usman and Hassan are also skeptical of the parking dispute as the motivation for the shooting. “Knowing Deah’s character, it definitely wasn’t a big argument. He would solve it in the most rational way and not argue with someone over something as small as a parking spot,” said Usman.

Hassan added that Hicks’s anti-religious statements on Facebook seemed to place him at definite odds with Barakat’s devotion to his faith.

On Hicks’s Facebook page, he derided people with any religious faith, posting quotes like “praying is pointless, useless, narcissistic, arrogant, and lazy; just like the imaginary god you pray to.” Another post is a photo of a gun, which Hicks describes as “my loaded 38 revolver, its holster, and five extra rounds in a speedloader.”

Hicks is currently being held without bail in Durham County Jail on three counts of first-degree murder. Police did not identify the weapon Hicks used.