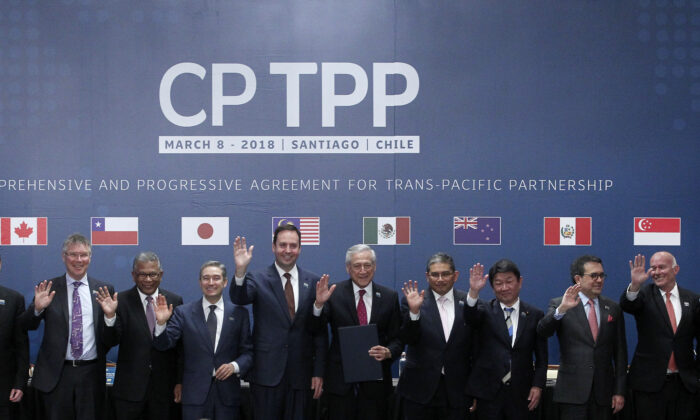 Who Wants the CPTPP?

The CPTPP should move quickly to accept the application of Taiwan

To join or be excluded from the Comprehensive and Progressive Agreement for Trans-Pacific Partnership (CPTPP) has suddenly become the major question for both Beijing and Taipei.

Initially proposed by the U.S. Obama administration, the Trans-Pacific Partnership (TPP) was meant to be a highly sophisticated, up-to-date free trade agreement that, in addition to the United States, would include the following countries: Canada, Mexico, Peru, Chile, Australia, Singapore, Vietnam, Japan, Malaysia, New Zealand, and Brunei. The idea was to set very high free trade standards that would guide development of globalization in the Asia-Pacific region for the 21st century. In doing so, the initiators of the deal aimed to fence their markets and industries off to some extent from the impact of Beijing’s mercantilist industrial and trade policies.

As it happened, the incoming Trump administration abandoned the negotiations in 2017, and the remaining countries concluded what they renamed the CPTPP among themselves in 2018. Some thought the new U.S. Biden administration would move quickly to bring the United States back into the group, but it has not done so yet.

Rather, as an ironic surprise, it is China who is now suddenly requesting permission to enter membership negotiations. The one against whom others were trying to protect themselves is making a potentially brilliant maneuver not only to gain membership but, by dint of its relatively much larger economy, to gain dominance under the treaty.

This move immediately created a huge risk for Taiwan. It is a major trading partner of many of the CPTPP members. But if China becomes a member, Taiwan would almost surely not only not be able to become a member itself, but might well find itself being discriminated against by CPTPP under Beijing’s control.

In quick response, knowing that if Beijing becomes a member there would be no chance for it to join, Taipei has submitted its own application for membership under the same identity for and definition of Taiwan that presently underpin its membership in the World Trade Organization (WTO) and in the Asia-Pacific Economic Cooperation (APEC) arrangement.

Where all this is likely to go and with what consequences for the future have now become major questions.

It is important to understand that becoming a member requires unanimous approval from the existing members. Since Australia and Canada have already voiced opposition to a possible membership request from China, it seems unlikely that its application will progress very quickly.

Taiwan, on the other hand, is a democratic country based on a capitalist, free market economy and is certainly as qualified to be a member as Singapore, Malaysia, Vietnam, or Japan. There is no good basis for the CPTPP to reject an application for membership by Taipei. Indeed, the only reason for doing so would be the cowardly one of trying to avoid conflict with Beijing. But even on that point, a counter argument would be that bringing Taipei into the CPTPP might inhibit Beijing from taking any military action against Taiwan in view of the fact that such action would also then inevitably directly affect the other members of the CPTPP.

This is a very powerful element. Would Beijing really launch an invasion of Taiwan knowing that such an action would inevitably also be a strike at all the members of the CPTPP?

Conversely, accepting Beijing as a member without at the same time accepting Taipei would enable Beijing to exclude Taipei in the future. Indeed, it might also put Beijing in a position to use its trade and investment dominance to pressure the CPTPP into policies that might undermine Taipei’s economic and political health.

In view of this, the best path for the CPTPP members would seem to be to move quickly to accept the application of Taiwan and make it a full member as soon as possible. The CPTPP could then put China on a probation track by setting certain targets for liberalization and reduction of state subsidies that it would have to meet before being considered for membership. If, after a reasonable time, Beijing could meet the requirements, it might be adopted as a full member in good standing, but only so long as it refrains from violating free trade market policies and from threatening the invasion of Taiwan.

For its part, the United States might do well to remain outside the organization. In terms of trade and investment, a number of economic analyses have demonstrated that America would obtain no significant gains from CPTPP membership. As an autonomous free world body without direct connection to the United States, the CPTPP might well be a very effective ally of Washington in maintaining free trade and free world values in the Asia-Pacific region.