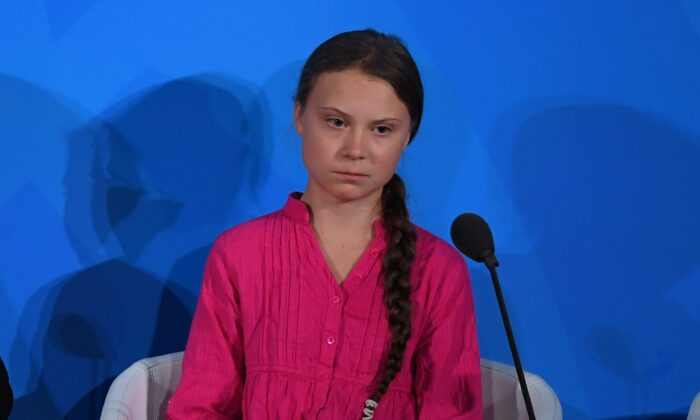 When 16-year-old Greta Thunberg addressed the U.N.’s Climate Action Summit on Sept. 23, she lashed out at the assembled dignitaries, crying, “You have stolen my dreams and my childhood.”

For reasons unfathomable to me, some American pundits mocked or criticized her. While I think the U.N. shamelessly exploited her, I believe her message was 100 percent genuine. Instead of being preoccupied with typical teenage concerns, Greta’s happiness fell victim to a deluge of apocalyptic prognostications.

The palpable despair from which Greta suffers is the bitter fruit of modern pagan environmentalism. Not just Greta, but millions of children have suffered varying degrees of anxiety and depression because adults have convinced them that human consumption of fossil fuels is pushing the planet toward catastrophic climate change.

Greta indeed has been robbed of a “normal” childhood—not by fossil fuel companies, as she believes, but by the U.N.’s Intergovernmental Panel on Climate Change (IPCC). When appearing before a congressional committee, she brandished the IPCC’s latest report and essentially said it contained the truth.

She apparently was sadly unaware that hundreds of scientists, some of whom I mentioned in my recent article about climate change ideologues, share the opinion of the eminent physicist Freeman Dyson, who bluntly stated that the climate change models used by the IPCC “do not begin to describe the real world.” (Among other deficiencies, the models apparently assume the world is flat.)

While the IPCC is the main culprit, they couldn’t have made Greta miserable without the help of sensationalistic media and ideologically slanted teachers and educational curricula. Those all pounded home green gloom and doom while apparently overlooking all the good news and positive developments in the world that would have given her a healthier, more balanced outlook.

Here are a few points I would share with Greta and the millions who share her glum, despairing view of our world.

The good news includes the immense progress made in reducing war and poverty around the world in the last half-century. While media headlines are once again hyping scary environmental scenarios, the fact is that more people are living in peace and prosperity than ever before.

More good news: Rich nations such as the United States have made great progress in curbing pollution. Cleaner air, cleaner water, reforestation, etc.—the improvements over recent decades have been commendable, and the trends are moving in the right direction. (My preferred priority going forward should be taking better care of the oceans.)

Regrettably, Greta’s generation has little understanding of the economics of profit. Profits shouldn’t be bemoaned or decried, but celebrated. Profits represent the creation of new wealth and, as the Kuznets curve shows us, once nations achieve a certain level of wealth, pollution declines as the costs of remediation become more affordable.

Another benefit of growing affluence is that the death rate from climate-related catastrophes has plummeted over the past century. We can never prevent destructive weather-related events, but wealth helps us cope with them more effectively. Condemning affluence is ignorant and wrong-headed.

Schoolchildren have been taught to despise fossil fuels. The truth is that those fuels supplied the cheap, reliable energy that propelled the spectacular economic growth of the past two centuries. Fossil fuel consumption correlates tightly with increasing wealth. To condemn fuels that have lifted billions of people out of wretched poverty seems uncompassionate if not unreasonable.

Well, maybe fossil fuels were helpful in the past, but today they are destructive, right? Wrong. Yes, human consumption of fossil fuels has enriched the concentration of CO2 in Earth’s atmosphere.

According to a study produced by a multinational team of scientists and reported by NASA, this has produced a marked greening of the planet. “From a quarter to a half of Earth’s vegetated lands has shown significant greening over the last 35 years largely due to rising levels of atmospheric carbon dioxide.” That’s an area equivalent to two times that of the continental United States.

But aren’t increasing concentrations of atmospheric CO2 dangerously heating the planet? They’re not. Unlike the known correlation between energy and wealth, the long-term record shows very little correlation between atmospheric CO2 and global temperatures. And since CO2 absorbs infrared radiation (commonly referred to as “trapping heat”) on a logarithmic scale, massive additional increases in CO2 will have minimal impact on temperatures.

However, even if the planet warms another degree Celsius, that will only return global temperatures to what prevailed during the Medieval Warm Period; two degrees would replicate the Roman Warm Period of two millennia ago; three would approximate the Minoan Warm Period of 35 centuries ago. Those three epochs featured impressive growth of civilizations. History shows that warm temperatures aren’t so problematical after all.

But won’t rising sea levels submerge huge areas of land? Nope. Sadly, the media are getting yet another environmental story wrong. Far from Earth being in danger of turning into a “waterworld’” as depicted in the 1995 Hollywood movie, more land is above water now than 30 years ago. There has been a net gain of  about 5,200 square miles of unsubmerged territory. Granted, it will require heroic efforts to save land in places like the Chesapeake Bay and the Louisiana Delta, but the problem there is land subsidence, not rising seas.

Finally, Greta’s fear of impending mass extinction is based on faulty figures. Extinctions are trending downward, and even pro-global warming entities like the BBC and International Union for Conservation of Nature calculate the post-2000 extinction rate as between one every two years and one per decade.

Greta gave the coordinators of September’s U.N. Climate Action Summit the emotional drama they wanted. They were delighted to give this unhappy child a platform from which to blast world governments for being too slow to adopt the U.N.’s grand strategy.

What a travesty that self-serving U.N. bureaucrats have been willing to terrorize innocent children with lurid scare stories to cynically use them as emotional leverage to promote their grand scheme to redistribute global wealth. As I wrote in February 2018, this is tantamount to child abuse.

Those ideologues indeed stole Greta’s childhood, and there is no way she can ever get it back. But she and her peers can still salvage their future joy by learning more about the true state of the world. They will find that—problems and challenges notwithstanding—prospects for the human race have never been brighter.