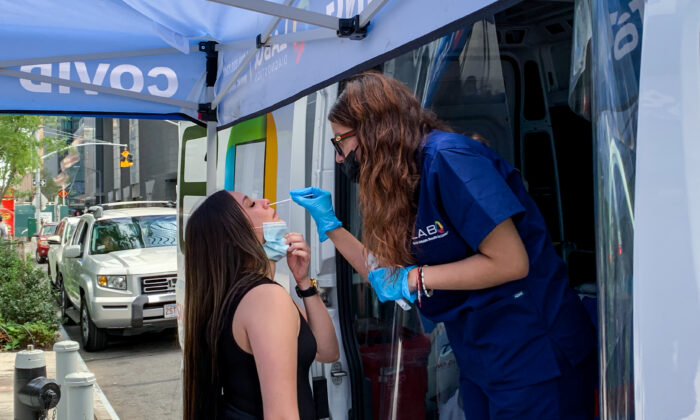 A medical worker takes a nasal swab sample from a woman at COVID-19 testing booth in New York on Sept. 20, 2021. (Chung I Ho/The Epoch Times)
WORLD

WHO Reports Decline in COVID-19 Cases, Deaths Across the World

The World Health Organization (WHO) is reporting a 10 percent global decline in new CCP virus cases and deaths.

An estimated 3.3 million new COVID-19 infections and roughly 55,000 deaths were reported in the past week, WHO said on Sept. 28 in a brief statement. The largest drop-off in cases and deaths was in the Americas, Middle East, and Western Pacific.

The total number of confirmed cases, WHO said, is now over 231 million, and the cumulative number of deaths has exceeded 4.7 million since the start of the pandemic about 21 months ago.

The U.N. organization said the number of cases in the United States fell by 31 percent in the past week, and all regions except for Europe and Africa reported declines in recent days.

Vaccine data provided by Oxford University’s Our World in Data suggests that nearly 50 percent of the global population has received at least one COVID-19 vaccine dose. About 6.2 billion doses have so far been administered, it said.

Top officials at WHO have issued frequent warnings that wealthier nations shouldn’t try to pursue a strategy to roll out booster doses, arguing that extra doses should instead be given to nations with low vaccination rates.

“What WHO is arguing is that booster doses in the general population, who had wide access to vaccines, who have already been vaccinated, is not the best bet right now,” Dr. Mike Ryan, director of the WHO’s health emergencies program, said during a news conference last week.

WHO Director-General Tedros Adhanom Ghebreyesus previously said that wealthier countries should put a moratorium on their respective booster programs until the end of the year.

“I will not stay silent when companies and countries that control the global supply of vaccines think the world’s poor should be satisfied with leftovers,” he told a news conference. “Because manufacturers have prioritized or been legally obliged to fulfill bilateral deals with rich countries willing to pay top dollar, low-income countries have been deprived of the tools to protect their people.”

The United States, Britain, Denmark, France, Greece, Germany, and Spain have begun or are considering plans to offer third shots of two-dose vaccines in recent weeks.