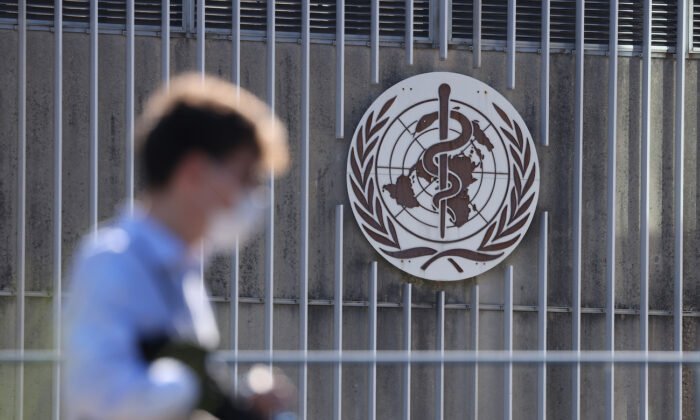 A man enters the headquarters of the World Health Organization in Geneva, Switzerland, on June 15, 2021. (Sean Gallup/Getty Images)
World

The World Health Organization on Wednesday said it is recommending “widespread use” of a malaria vaccine for children in sub-Saharan Africa and other at-risk regions.

The recommendation for the AS01 formulation of the RTS,S vaccine, also known as Mosquirix™, is largely based on results from an ongoing pilot program in Ghana, Kenya, and Malawi that followed more than 800,000 inoculated children since 2019, the WHO announced.

The initial RTS,S vaccine was developed by GlaxoSmithKline, a UK pharmaceutical company, in 1987.

Malaria is caused by a parasite transmitted by infected mosquitoes. The vaccine is recommended for areas with moderate to high transmission of Plasmodium falciparum, which is the most deadly malaria-causing parasite and the most prevalent in Africa. Mosquirix is designed to prevent the parasite from infecting and multiplying in the liver, before the parasite has a chance to re-enter the bloodstream and infect red blood cells.

Malaria can also be caused by other parasites including P. vivax, P. ovale, P. malariae, and P. knowlesi. The WHO has comprehensive guidelines for the treatment of malaria in a 2015 publication (pdf).

While it has received the WHO’s recommendation, Mosquirix’s efficacy stands at around 30 percent, and requires a schedule of four doses in children from 5 months of age. The vaccine’s protection also fades after several months.

In terms of side effects, the vaccine is associated with an “increased risk of febrile seizures within 7 days of the administration,” the WHO previously stated in March 2020. “In the Phase 3 trial, children who had febrile seizures after vaccination recovered completely and there were no long-lasting consequences.”

Other known side effects include similar reactions with other vaccines given to children, including swelling and pain at the site of injection, and fever.

Director-General Tedros Adhanom Ghebreyesus said that the vaccine, a world-first, is “a gift to the world” that will make the greatest difference in Africa where the burden of the disease is greatest.

Director of the WHO’s Global Malaria Programme, Pedro Alonso, also told reporters that while he doesn’t believe “we are within reach of a highly efficacious vaccine yet,” Mosquirix presents a vaccine option that is deployable, safe, and “can have a massive impact in terms of lives saved and episodes of malaria averted,” even at 30 percent efficacy.

“That 30 percent—given the magnitude of what malaria represents—is probably one of the most impactful vaccines that one could actually using in Africa right now,” he said.

According to the U.N. agency, malaria affects about 200 million people and claims about 400,000 lives a year, 67 percent of which are children.

“Every year, hundreds of millions of people fall ill and hundreds of thousands die sadly due to this preventable and treatable disease. Every two minutes, a child under five dies of malaria … Today’s recommendation, therefore, offers a glimmer of hope for the continent. We expect many of the African children will be protected from malaria and grow into healthy and productive adults,” Tedros said.

He said in a separate statement, “Using this vaccine on top of existing tools to prevent malaria could save tens of thousands of young lives each year.”