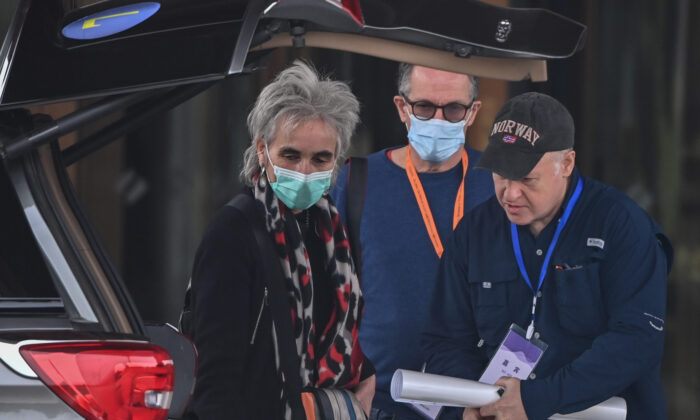 WHO team members Peter Daszak (R) and Marion Koopmans (L) are accompanied by Peter Ben Embarek (C) as they leave their hotel in Wuhan, a city in central China's Hubei Province on Feb. 10, 2021. (Hector Retamal/AFP via Getty Images)
US-China Relations

WHO Probe Under Scrutiny Over Investigators’ Ties to Chinese Regime

International critics are questioning the impartiality of a World Health Organization (WHO) team that recently conducted a fact-finding mission in Wuhan to probe the origins of the CCP virus.

The team consisted of 17 Chinese experts and 17 foreign experts from 10 countries. They began their work in the central Chinese city of Wuhan—the epicenter of the CCP (Chinese Communist Party) virus outbreak—in late January before presenting their preliminary findings at a virtual press conference on Feb. 9.

However, the composition of the WHO team has come under scrutiny. In particular, some experts have relationships with the Chinese regime, raising conflict of interest issues.

Leung Man-to, a political science professor at Taiwan’s National Cheng Kung University, told The Epoch Times that the independence of the findings was compromised by the fact that foreign experts chosen by the WHO needed to first be approved by Beijing.

In October last year, Mike Ryan, executive director of the WHO’s Health Emergencies Program, said during a meeting that “a list of candidates has been submitted to the Chinese authorities for their consideration and for next steps in order to deploy that team.”

Given the experts were vetted by Beijing, Leung said that it was unlikely their findings would stray from the CCP’s narrative of the virus origins.

“Simply put, we can reasonably infer that the conclusions of the findings were long written up, and [Beijing] simply needed people [foreign experts] to lend their support,” Leung said.

He added that the independence of the findings was further compromised by the fact that Chinese experts were part of the team.

The experts, who were in China for four weeks, two of which were spent in quarantine, were reliant on Chinese authorities to do the actual investigation, according to WHO adviser Jamie Metzl. The Chinese regime also refused to provide raw data on early COVID-19 cases to the health body, according to one WHO team member.

The WHO has not yet released its final report on its findings in Wuhan. However, Peter Ben Embarek, who led the team, said on Feb. 9 that the possibility of the virus being leaked from the Wuhan Institute of Virology was “extremely unlikely.” Days later, WHO Chief Tedros Adhanom Ghebreyesus appeared to walk back on this statement, saying that “all hypotheses remain open and require further study.”

Ties to the CCP

At least two of the foreign experts on the team—Peter Daszak and Marion Koopmans—have ties to the Chinese regime. Koopmans is a Dutch virologist, while Daszak is a U.S.-UK dual national who heads EcoHealth Alliance, a New York-based nonprofit that works in pandemic prevention.

EcoHealth also “channeled money from the [U.S.] National Institute of Health” to the Wuhan Institute of Virology, according to a January article by New York Magazine. The institute, one of China’s top virus research labs, has been at the center of speculation that it could have been the source of the pandemic through an accidental lab leak. Researchers at the lab have conducted extensive research on bat coronaviruses.

A fact sheet released by the U.S. State Department in late January stated that it “had reason to believe” several researchers at the institute fell ill with symptoms consistent with both COVID-19 and common seasonal illnesses in the autumn of 2019. A senior researcher at the institute previously said in July 2020 there was “zero infection” among lab staff and students.

The sheet also said the lab was engaging in secret animal experiments for the Chinese military since 2017. It was also conducting “gain-of-function” research on viruses—which involves creating artificial viruses with new or enhanced capabilities, according to the fact sheet.

Beijing has repeatedly refuted suggestions that the virus was leaked from the institute. On Jan. 18, China’s foreign ministry spokeswoman Hua Chungying during a daily briefing accused the fact sheet as being “filled with conspiracy theory and lies.”

Daszak took China’s position on the lab leak theory early last year, at a time when the Wuhan lab was under intense scrutiny as being the source of the virus. In February 2020, Daszak was among a group of 27 public health scientists who issued a joint statement “strongly” condemning “conspiracy theories suggesting that COVID-19 does not have a natural origin.”  The group said the coronavirus “originated in wildlife” after analyzing its genomes.

The Lancet statement was organized by Daszak, and his spokesperson told the Wall Street Journal in January that it was prepared as “a showing of support” for Chinese scientists, who at the time were allegedly receiving death threats.

Last September, Daszak appeared in a CCTV documentary on China’s fight against the pandemic. He praised China’s early responses to the outbreak, saying it was “unprecedented and is incredibly efficient.”

Prior to the pandemic, Daszak also praised China’s flagship foreign policy project, the Belt and Road Initiative (BRI). According to a 2018 article on the website of China’s Center for Disease Control and Prevention, Daszak praised the regime’s efforts to work with other countries under the BRI to fight emerging infectious diseases, saying it would “benefit the world.”

Beijing rolled out BRI in 2013 in an effort to expand its global influence and build Beijing-centered trade networks by financing infrastructure projects throughout Southeast Asia, Africa, Europe, and Latin America.

Koopmans also has ties to the CCP as evidenced by her biography page on the provincial Center for Disease Control and Prevention in southern China’s Guangdong Province. The bio page stated that she was hired in 2008 to work as the center’s science adviser.

She also lauded Chinese regime’s responses to the outbreak. According to a February 2020 article from the CCP’s official mouthpiece People’s Daily, the Dutch virologist praised Beijing for how quickly it was able to build a field hospital in Wuhan to treat patients.

Daszak and Koopmans did not respond to requests for comment.

Some in the U.S. health community have voiced concerns about the apparent conflicts of interest in the WHO team.

“Dr. Daszak has a clear-cut conflict of interest that should’ve disqualified him from participation on the WHO team,” stated Michael Weinstein, president of the Los Angeles-based nonprofit AIDS Healthcare Foundation, according to a Feb. 10 statement.

He added: “Now, any conclusions of the investigation will be tainted by one more fragment of uncertainty.

“Regrettably, the only plausible way out of this situation is to start over–to disband the WHO team, and charge a neutral, non-political body with reconstituting it. To ensure the highest degree of independence, all members of the new team should have the full protection of diplomatic immunity.”

Leung told The Epoch Times that had former U.S. President Donald Trump won his re-election bid, his administration would either reject the WHO findings outright, or be a more forceful critic of the body than the Biden administration.

On Feb. 9, State Department spokesperson Ned Price said the “jury’s still out” on whether Beijing gave full transparency to the WHO team. Days later, White House National Security Adviser Jake Sullivan issued a statement questioning the process by which the team reached their findings. He also called on the regime to release its data from the earliest days of the outbreak.

Daszak criticized the White House’s skepticism of China’s transparency during the WHO probe, saying in a Feb. 9 tweet that President Joe Biden “has to look tough on China.” He added, “Please don’t rely too much on US intel: increasingly disengaged under Trump & frankly wrong on many aspects.”

Several former Trump officials have rebuked the WHO team and its findings.

Former Secretary of State Mike Pompeo on Feb. 9 told Fox that there was “significant evidence” that the virus originated from the Wuhan lab, despite the WHO’s statements. A day later, former director of National Intelligence John Ratcliffe criticized the WHO findings as “disingenuous.”

On Feb. 21, Matt Pottinger, the former deputy national security adviser, told CBS that the WHO team was “deeply conflicted.”

“It’s made up of people who have benefited from public funding to work in the very lab where this thing may have actually originated from the Wuhan Institute of Virology,” Pottinger said.

He concluded: “[I]t’s not a credible exercise that we’ve seen undertaken to get to the roots of where this thing originated.”