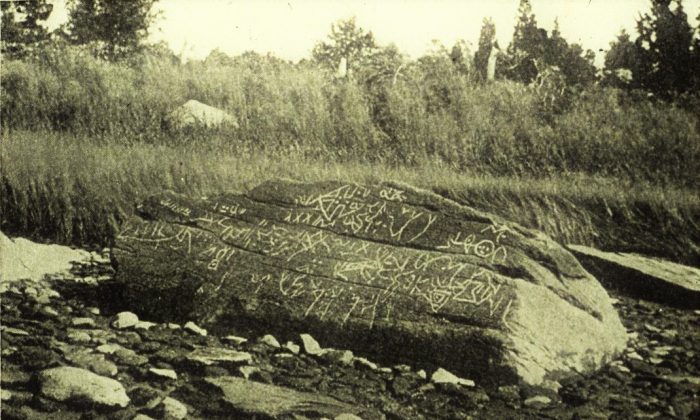 Who Made the Petroglyphs on the Mysterious Dighton Rock?

Are the symbols on the Dighton Rock Native American? Norse? Phoenician? Chinese? Portuguese? Japanese? All or none of the above? There have been numerous theories about who carved the inscriptions found on the 40-ton boulder in Massachusetts. But no one has been able to say with certainty who first wrote on the rock, what they wanted to communicate, or why.

The Dighton Rock is a 40-ton boulder that arrived to the Taunton River when glaciers melted during the last ice age. It measures 5 feet (1.5 meters) high, 9.5 feet (2.9 meters) wide, and 11 feet (3.4 meters) long, and is made of gray-brown crystalline sandstone.

What has drawn attention to the great boulder is not its size, but the petroglyphs across one of its six sides. These carvings have been the inspiration for over 1,000 books and articles, and more than 35 hypotheses. Although no one can say for certain who made the inscriptions, it is certain that they are very old.

Many scholars say that the mystery of Dighton rock began in 1680, when Reverend John Danforth visited the rock. After seeing it, he decided that the carvings on it were made by Native Americans (the Wampanoag Indians to be exact), and that they told the tale of a ship arriving, then a battle between the locals and the newcomers.

Danforth sketched the symbols visible on the top half of the petroglyph (possibly because the rest was under tidal water while he worked) and wrote: “It is reported from the tradition of the old Indians, that there came a wooden house (and men of another country in it) swimming up the river Assonet, that fought the Indians and slew their Sachem. Some interpret the figures to be hieroglyphical. The first figure representing a ship, without mast, and meer (mere) wrack cast upon the shoals. The second representing a head of land, possibly a cape with a peninsula.”

Danforth’s drawing was requested by the Royal Society of London in 1732 and is now preserved in the British Museum.

In 1689, Reverend Cotton Mather (who may or may not have seen the famed boulder himself) wrote that it had a certain undesirable feel about it. He supposed that the engravers were Satanist explorers who arrived and perished in America before the Puritans came along.

Following Danforth’s 1680 belief that the Native Americans depicted a great battle on Dighton Rock, and the 1690 supposition by Mather about Satanist explorers, came the suggestion that the characters were Phoenician script.

This hypothesis was put forward in 1767 by then-president of Yale College Ezra Stiles. Stiles claimed that the famous seafarers, the Phoenicians, had made their way all the way to North America on at least one voyage. Stiles believed that the writing was left by them to simply show that they were once there.

Stiles’ idea was a popular one in Europe for some time and was advanced by Antone Court de Gebelin, a French scholar. He said that the carvings on the rock should be split into three sections—the past, present, and future. Some of the images he identified were an oracle and butterfly (the future), a horse and a beaver meeting (symbolical representations of the two contents interacting in the present), and the divine figures Minerva, Telesphore, and Priapus (in the past).

After Danforth’s drawing arrived in Europe, other armchair archaeologists began to suggest that the Armenians left their mark after crossing the Bering Strait. Still more argued that the inscriptions were evidence for contact between the Native Americans and the Chinese or Japanese.

The next major documentation of a hypothesis came from the American forefather, George Washington.

The next major documentation of a hypothesis came from the American forefather, George Washington. In 1789, he visited Dighton rock, and agreed with Danforth’s belief that the Native Americans had made the inscriptions, as he had seen similar carvings made by them in Virginia.

Supporters of the Native American authors say that the carvings show round-headed anthropomorphs, turkey and other animal tracks, footprints, and snaking lines. They also believe that the petroglyphs were meant to mark territory, depict a great battle, or were perhaps drawings after a vision quest.

After that, talk of Dighton Rock quieted down for about 50 years, but the Danish writer Charles Christian Rafn rekindled interest in 1837. He wrote 40 pages of analysis on the Dighton Rock, with a conclusion that the inscriptions were certainly Norse.

According to Rafn, the script on the rock was Norse and read, “Thorfinn and his 151 companions took possession of this land.”

According to Rafn, the script on the rock, read, ‘Thorfinn and his 151 companions took possession of this land.’ This hypothesis has largely been discredited by claims that Rafn had altered the images on the rock for his book.

The Longstanding Hypothesis of the Portuguese

The Norse rattled around for years and was greatly supported by the Protestants of New England, but that was not the end to the mystery. Almost everyone who visited or saw images of Dighton Rock argued that they saw something different in the engravings.

Thus, the next great hypothesis came in 1912. Edmund Burke Delabarre, a psychology professor at Brown University, who spent many summers viewing and analyzing Dighton Rock, wrote that he had finally come to the truth of the inscription—it was Portuguese.

Specifically, Delabarre asserted that the author of the inscriptions was the Portuguese explorer Miguel Corte-Real, who had left Portugal in 1502 in search of his brother and was never seen again.

According to Delabarre, the writing on Dighton Rock, said: “I, Miguel Cortereal, 1511. In this place, by the will of God, I became a chief of the Indians.”

Further analysis of the markings led more scholars to join Delabarre, saying that the Coat of Arms of Portugal, the name Miguel Corte-Real, and the date 1511 are all clearly visible if one fills in gaps that may have been caused by weathering.

This hypothesis has been supported, perhaps unsurprisingly, by the government of Portugal and much of the Portuguese population living not far from Dighton Rock.

It must be noted that before he came to the Portuguese solution, Delabarre was about to report that the rock had an almost Rorschach-like or hypnotizing effect on people—they tended to see whatever they wanted to believe.

The rock had an almost Rorschach-like or hypnotizing effect on people—they tended to see whatever they wanted to believe.

One of the most recent theories came in 2002. Gavin Menzies, in his book, “1421: The Year China Discovered America,” proposed that the inscriptions were made by Chinese explorers who had arrived and claimed the Americas for themselves at that time.

The Dighton Rock remained in the Taunton River until 1963, when all 40 tons of it were hauled out of the river. While in the river, most of the rock was visible at low tide, however high tide nearly covered the rock. Today the Dighton Rock stands inside a specially constructed museum to protect it from graffiti and the elements.

The number of tourists and interested scholars seems to have fallen over the last few years, and the mystery of the symbols on the Dighton Rock may never be solved. Some say that wear and tear have left many of the carvings indecipherable now, and several (though not all) of the interpretations from the past (and present) tend to be biased.