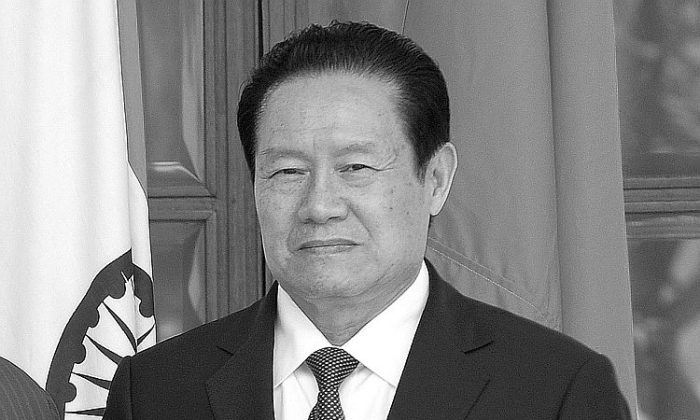 Who is Zhou Yongkang?

Before entering the world of politics, Zhou Yongkang (b. 1942) worked in the oil fields for almost 30 years.

It is widely believed that after his first wife died in a car accident, Zhou’s prompt marriage to former president Jiang Zemin’s niece greased the wheels on his path to the Chinese Communist Party’s (CCP’s) leadership. In 1998, Zhou left his position as the head of China’s national petroleum company, and was appointed the minister of land and resources. One year later, Zhou became the Party leader for Sichuan Province.

Also in 1999, then-president Jiang Zemin vowed to eradicate Falun Gong in three months through a nationwide campaign. As a relative and a trusted companion in the leadership, Zhou assumed key roles in carrying out the persecution against Falun Gong (also known as Falun Dafa).

While he was the Party leader for Sichuan Province, Zhou ordered financial rewards for individuals from prisons, labor camps, and public security bureaus who were particularly active in torturing and brainwashing captured Falun Gong practitioners, according to the Falun Gong website Clearwisdom. With at least 217 confirmed deaths of Falun Gong practitioners due to torture and abuse, Sichuan Province is one of the provinces with the most severe human rights abuses related to the persecution against Falun Gong.

According to Clearwisdom, official documents leaked from the 610 Office—the Party organ set up by Jiang Zemin for the purpose of eradicating Falun Gong—show that as director of the Political and Legislative Affairs Committee Zhou Yongkang (2007–present) and Luo Gan (1998–2007) each gave permission to police to “perform medical treatments while transforming Falun Gong practitioners if necessary.” At least 11 Falun Gong practitioners are known to have died of injections with drugs that damage the central nervous system. During his visit to the United States in 2001, Zhou was sued for crimes against humanity.

Because of his active participation in Jiang’s persecution of Falun Gong, in December 2002, Zhou was promoted to the position of minister of the Department of Public Security, though he had no experience in the field. When he was also appointed in November 2001 assistant director of Central 610 Office, Zhou brought his Sichuan-style strategies against Falun Gong to a nationwide level, according to the World Organization to Investigate the Persecution of Falun Gong.

At the same time, Zhou successfully entered the central organs of the regime. As a member of the Politburo and the secretariat of the Party’s Central Committee, Zhou was involved in personnel decisions for both the Party and the state.

In 2007, Zhou was promoted to the head of The Political and Legislative Affairs Committee of the Communist Party, overseeing all legal enforcement authorities including intelligence, law and order, security, detention, and judicial and procuratorial agencies. In this position, Zhou’s tasks have been varied. Zhou has been involved in silencing the protests of parents of children who were trapped under poorly constructed school buildings in the 2008 earthquake, initiating taking troops to Tibet after widespread reports of protests by self-immolated monks, and sourcing overseas Chinese students for intelligence work.