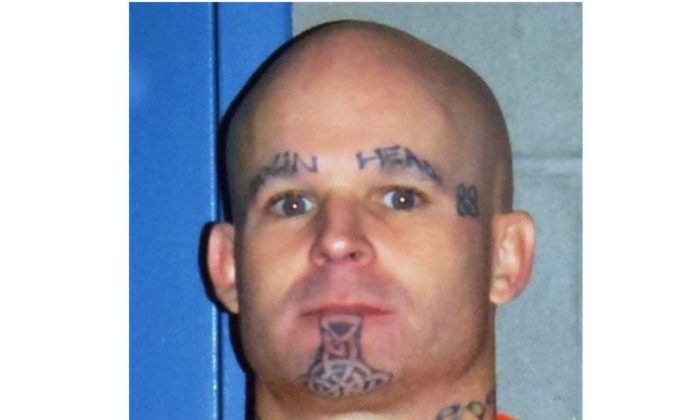 This undated photo provided by the Arizona Department of Corrections shows Ryan Giroux. A rampage Wednesday, March 18, 2015, included a motel shooting, a carjacking and a home invasion and ended with his arrest at a nearby apartment in suburban Phoenix. Police later identified the man as Giroux, an ex-convict who has served three stints in state prison since 1994. (AP Photo/Arizona Department of Corrections)
Crime and Incidents

The image of a white male with a shaved head, with unmistakable face tattoos (including the words “skin head” instead of eyebrow hair), was being shared writ large on Twitter and other social media websites.

The man, Ryan Giroux, was identified as the main suspect in the shooting rampage in Mesa, Arizona, that left at least one person dead and five others wounded.

Giroux—who features a tattoo of a Celtic cross and “88,” a white supremacist symbol—has a lengthy rap sheet. He was released from an Arizona prison in 2013 and has convictions for aggravated assault, marijuana, theft, and second-degree burglary. He has served about 14 years behind bars.

According to the Southern Poverty Law Center, a civil rights advocacy group that goes after hate groups and racism in the United States, a retired Mesa Police detective described Giroux as “a violent guy.”

“I think his time in prison contributed to that,” the detective said in the report.

A handcuffed Giroux on Thursday heard the many charges against him, including murder and attempted murder. A prosecutor asked that bond be set at $2 million for what he called a “spree of multiple serious offenses.”

“The guy was a hardcore Nazi skinhead, a member of Hammerskin Nation, which is an incredibly violent national racist skinhead group,” said Mark Potok, the editor-in-chief of the Southern Poverty Law Center’s quarterly journal, according to AZCentral.com.

“We have learned by talking with a retired Mesa Police detective who we have known for quite a few years that Giroux was known to him way back in the ’90s and early 2000s as a member of Hammerskin Nation,” said Potok, adding that the Hammerskin Nation is a violent national skinhead group associated with the Aryan Brotherhood. “Each of those 8’s stand for the eighth letter of the alphabet, which is ‘H,'” he added. HH refers to”Heil Hitler.”

“We don’t know exactly what he [Giroux] was doing there, but he was asking for something in particular. We don’t know if it was drugs, money—those things will be worked out through the investigation,” Mesa police Detective Esteban Flores told AZCentral.com.

Despite his checkered past, the shootings have not been classified as a hate crime. Mesa Detective Steve Berry said it was a homicide and “had nothing to do with gang affiliation or a hate crime.”