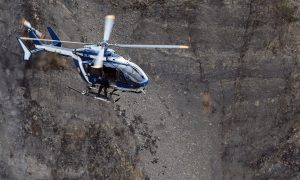 Germanwings is certainly liable for the plane crash in the French Alps that killed 150 people last Tuesday and has already offered an initial payment to the families of the victims. The question is how far that liability will extend given new revelations about the mental state of co-pilot Andreas Lubitz.

Prosecutors believe that Lubitz, 27, deliberately crashed the plane into the French Alps killing himself and everyone else on board. He apparently hid his medical problems, including depression, from his employer.

“It is the air carrier providing transportation for hire that did not complete that transportation but crashed. This incident is controlled by the 1999 Montreal Convention, to which Germany is a party. The cause of the crash is irrelevant to [German]wing’s Montreal obligations,” he says.

Families of victims are automatically entitled to receive up to approximately $170,000 under international rules that govern international flying, according to the 1999 Montreal Convention.

In most cases, an airline is liable in case of a crash, no matter if it was due to a “criminal act, terror, hijacking, wing fell off due to defective design, whatever,” Sterns adds.

To avoid liability, the carrier “must establish that it was entirely free of any fault or negligence, or that the crash happened completely due to circumstances beyond its control.” Perhaps a plane being randomly shot down by a rogue sniper in normally friendly territory.

“This is a very high burden to meet, and given what we are finding out about this pilot and the fact neither [parent company] Lufthansa or [German]Wings apparently had any screening protocol in place to monitor this guys return to service” and it is “unlikely that they could prevail here,” Sterns notes.

Regarding how much money will be paid out, not every family will get the same amount, Sterns says. The 1999 Montreal Convention “itself does not spell out the measure of damages or by whose standards they will be determined. That is up to the court that hears the case,” he says, noting that unlimited liability “does not mean the moon.”

It’s not clear if it was known to Germanwings  that Lubitz had a history of depression and suicidal tendencies. If Lubitz’s murder-suicide was intentional, the airline would be liable for that if they knew or should have known he was capable of doing such a thing.

“Right now, there is no incentive for airlines to regularly monitor pilot [and] crew mental health because if they don’t, they can say we didn’t know if something happens,” wrote Brian Claypool, a criminal defense attorney and civil rights litigator, via email.

There is no incentive for airlines to regularly monitor pilot [and] crew mental health because if they don’t, they can say we didn’t know if something happens.
— Brian Claypool, Criminal defense attorney
Related Coverage

For several years before becoming a pilot Lubitz had received psychotherapy “with a note about suicidal tendencies,” say Dusseldorf prosecutors.

“In the following period, and until recently, further doctor’s visits took place, resulting in sick notes without any suicidal tendencies or aggression against others being recorded,” prosecutors’ spokesman Ralf Herrenbrueck said in a written statement.

He did not say where this treatment took place. Lubitz trained to be a pilot both in Germany and at the Lufthansa training facility in Phoenix, Arizona.

On the day of the crash, Lubitz had been excused from work by a neuropsychologist, but he reported as usual without informing his employer. Investigators believe that he intended to commit suicide by crashing the plane.

Based on data from the plane’s cockpit voice recorder, it seems Lubitz locked the captain out of the cockpit and ignored his pleas to open the door while sending the plane into a fatal descent on what should have been a routine flight.

Lufthansa announced it would be making an initial payment of approximately $54,000 to the relatives of victims who died in the crash. The sum won’t affect future settlements.

Since the pilot intentionally crashed the plane, relatives could get more compensation from the airline, another lawyer said.

“It is sad, it is tragic, but it is extremely straightforward,” Robert Alpert Sr., a longtime aviation lawyer, told the New York Times.

“The airline and its insurer should quickly handle the payments to the families. Particularly in light of the fact that they apparently dropped the ball in monitoring this pilot’s physical and mental well-being.”